This plane was developed in 1915 to succeed the unsuccessful AEG C.III. It was derived directly from the AEG C.II, with which it had much resemblance.
It differs from the AEG C.II in the large wingspan and the engine. Noteworthy was the somewhat sharp cowling and the large exhaust pipe, pointing upwards above the upper wing.
The first C.IV's entered German service in 1916 and the type was still in use during 1918.

A further development was the AEG C.IVN, a night bomber, produced in 1917. This type had a larger wingspan.
An other version was the AEG C.IVA, equipped with an Argus engine of 180 hp.


On December 12, 1917 one aircraft of this type was interned at Heythuizen and entered in service in 1918. Nice detail is that this particular aircraft was built at Fokker, Schwerin.
On September 27, 1918 it crashed at Soesterberg and it was written off. 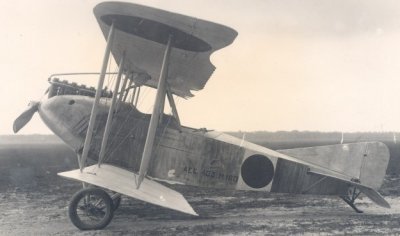 
The aircraft had the orange balls applied on wings and fuselage.
It was painted, just like the Fokker D.III, in a turquoise blueish colour (called "turkoois blauw" in Dutch), with a dark brownish varnish all over it.
Compare your model with photo's with the original (Dutch) airplane.

Below the paint scheme of the AEG C.IV. Note that the colours and letter font used for this drawing may not be correct, but just reflect as good as possible the ones used on the real aircraft.

Standard scheme AEG C.IV.
The aircraft was Fokker built and painted in the blueish colour used by Fokker at that time.

Special thanks to xxxxx.