In the period 1954-1955 the US Army was looking for a utility-helicopter to use for instrument training an common use. Bell had registered the contest with model 204 and was selected. The type, was eventually designated as HU-1; this was the reason for the well known nickname of this helicopter, Huey. It was designated UH-I Iroquois by the US Army.
The first of three prototypes flew in October 1956. Six pre production machines were built for testing purposes. The first production version was designated UH-1A and was delivered during 1959. It was equipped with one Lycoming T53-L-1A rated at 770 hp.

UH-1B Iroquois:
This was a development of the UH-1A and it was equipped with the stronger Lycoming T53-L-5 turbo-shaft engine, rated at 960 hp. Later UH-1B's were equipped with a Lycoming T53-L-11 van 1100 hp. The UH-1B could carry seven passengers besides the crew of two, or two stretchers and two passengers.
The armament consisted of rockets an electrically manoeuvrable machine-guns. The first UH-1B was delivered in march 1961.
UH-1C Iroquois:
This was a development of the UH-1B with improved rotor blades, thus giving the chopper a higher speed and better manoeuvrability.
UH-1E Iroquois:
This was the Naval version of the UH-1B, developed on behalf of the US Marine Corps. It could transport nine persons.
UH-1F Iroquois:
Also based upon the UH-1B. Twenty-five of this type were delivered to the USAF. It was equipped with a General Electric T58-GE-3 rated at 1100 hp; the rotor was enlarged and had a diameter of 14.63 m. Besides he pilot ten passengers or a load of 1815 kg could be carried. Delivery started in February 1964. A trainer version was the TH-1F Iroquois. A special version was the UH-1P.
HH-1K Iroquois:
This was a special SAR-implementation on behalf of the US Navy. Twenty seven of it were delivered in 1970.
TH-1L Iroquois:
This was a trainer version for the US Navy, which can be compared with the UH-1E. This type was equipped with one Lycoming T53-L-13 of 1100 hp and improved electronics. Fifty-four of this type were built in 1968.
UH-1L Iroquois:
An utility version of the TH-1L for the US Navy. Eight of this type were built in 1969.
UH-1M Iroquois:
An evaluation version on behalf of Hughes Aircraft Iroquois night fighter & night tracker system. Three of this type were used by US Army.


In 1961 seven helicopters of the type (I)UH-1 were bought and intended to use in (former) Dutch new Guinea. They were in use by no. 7 squadron based at naval air station Valkenburg. The type was mainly used for transport services and occasionally for SAR-tasks.
The undercarriage could be replaced with a floatation gear, but this configuration was rarely used. Two of the aircraft were in use with no. 1 squadron based at Hato. 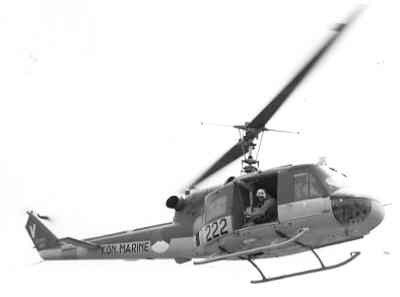 Agusta-Bell 204B(I)UH-1, 222 during a lifting exercise. It is not equipped yet with inflatable floats and has a retractable hoist.
[Enclosed photo from BeeldBank NIMH. Click on photo for ordering information] 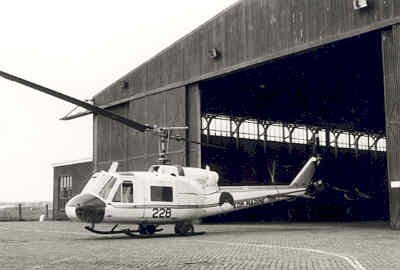 In may 1978 the remaining Hueys were sold to Sky Controls Inc., Sun Valley, California. The aircraft were never used in the US, because of the Italian engines they were equipped with. After several years some of them were given to a Swedish museum.

At the end of the nineties Agusta-Bell 220 and 225 (and also 227?) were discovered there an returned to the Netherlands. The aircraft had still the original Dutch paint scheme applied; After being overhauled Agusta-Bell 225 is now on display at the Militaire Luchtvaart Museum at Soesterberg.

Further Agusta-Bell 227 was acquired in 2006 by Classic Aircraft Foundation and transported to the Netherlands for restoring it to flying condition. Also this aircraft  still had the original Dutch paint scheme applied. 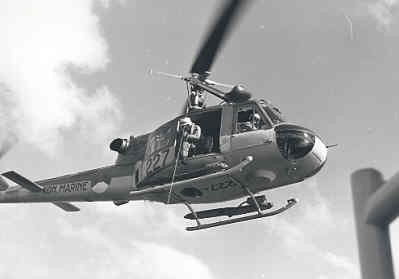 Agusta-Bell 204B (I)UH-1 227 during a lifting exercise. Clearly visible are the inflatable floats.
[Enclosed photo from BeeldBank NIMH. Click on photo for ordering information] 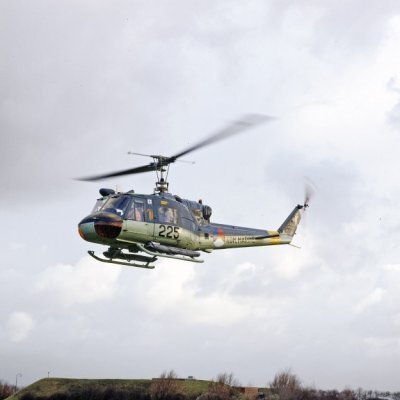 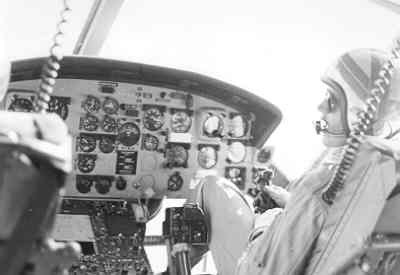 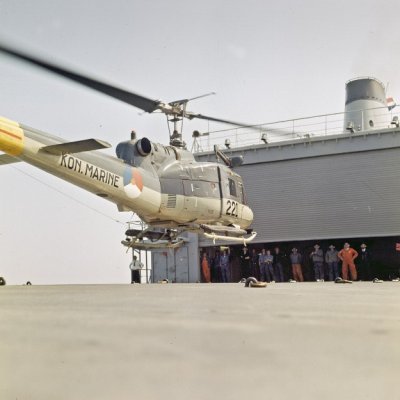 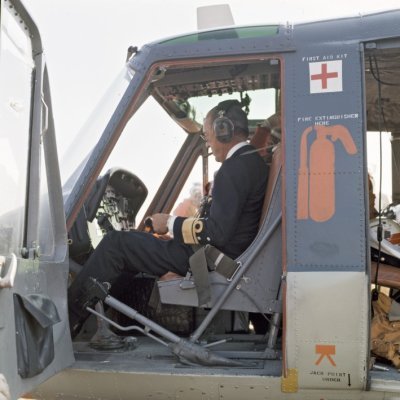 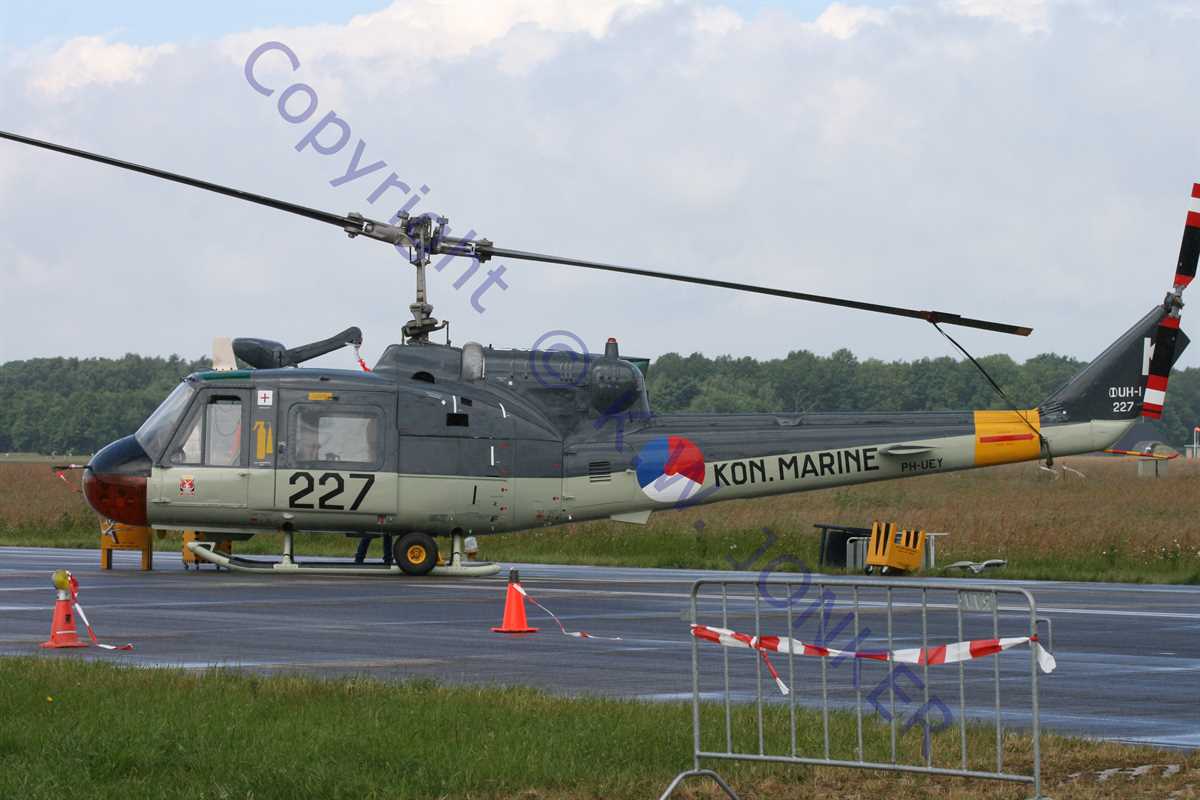 The nicely restored Agusta-Bell 204B 227, photographed in June 2013 during the Open Day at Volkel Air Force Base.
The aircraft is technical airworthy, but was at that time awaiting its certification. 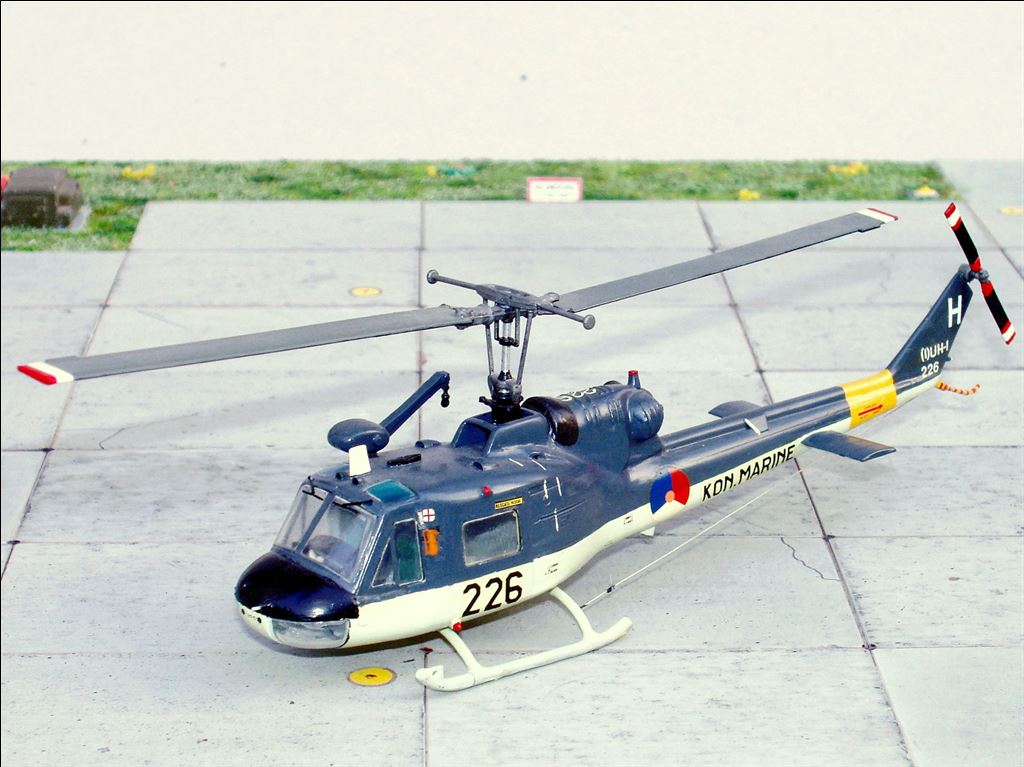 A model of a Dutch Agusta-Bell (I)UH-1, built by Adri Kleijn.

Agusta-Bell 204B MLD, shown here without hoist and without floats.

Agusta-Bell 204B MLD, shown here with hoist, but without floats.

Agusta-Bell 204B MLD, shown here with the hoist and floats.

Special thanks to P. Baijens for correction of the serials.