In 1933 AVRO designed type 652, based upon specifications of Imperial Airways for a airplane for internal airline services.
Type 652 was built in the same construction as its Fokker contemporaries, that is a steel pipe construction covered with linen and a wooden wing. Its tail section was covered with aluminium.

First flight of the aircraft was in January 1935. Imperial Airways ordered three aircraft.
In May 1934 the British ministry formulated specification G.18/35 for a reconnaissance aircraft with a crew of three members. This should be based upon an existing design.
Avro presented a somewhat changed design AVRO 652A based upon the civil AVRO 652. It differed from the AVRO 652 in that it had straight windows, the possibility to carry a bomb load of about 45 kg internal and eight bombs of about 9 kg each under the wings and a standard armament of one fixed 7,7 mm Vickers machine gun in the nose and one 7,7 mm Lewis machine gun in the dorsal turret.
Avro was allowed to built a prototype, which would compete with the De Havilland DH-89 Dominie.
Its maiden flight was March 1935 and proved to be much better than the DH-89, so production of the Anson started.

Avro Anson Mk I:
December 1935 the first production aircraft, the Anson Mk. I, equipped with two Armstrong Siddeley Cheetah IX engines, was rolled out.
RAF Coastal Command squadron No.48 was the first squadron, operational on the first British military aircraft equipped with a retractable landing gear.
The Anson Mk I became the standard patrol and reconnaissance aircraft of both RAF as RAAF.
By the end of the thirties it became obsolete and to slow for it original task, so the Anson became the standard multi engine training aircraft.
>During the beginning of the war the Anson was a tremendous opponent. It proved to have a great resilience
Both Dutch squadron 320 and 321 Coastal Command were equipped with the Anson. It succeeded the old Fokker T-VIIIW. About 17 aircraft were used. The last one being discharged in 1941 from operational service. Several aircraft were still used by 320 squadron for training purposes.
A total of 6706 Anson Mk I were built.
Avro Anson Mk II/ AT-20:
The Mk II was designed as a training aircraft for multi engine training.
it was used for the training of radio-operators, navigators, gunners and pilots.
It differed from the Mk I in the moulded plywood nose, hydraulic powered landing gear and flaps and two Jacobs engines rated 330 hp each.
All Mk IIs were built in Canada by Federal Aircraft Ltd. Totally 1050 Mk II’s were built, Fifty of them went to the USA as AT-20, equipped with Jacobs R-915-7 engines.
Avro Anson Mk III:
The Mk. III differed from the Mk II in being equipped with two Jacobs L-6MB engines. These aircraft, a total of 559 examples, were built, also in Canada.
Avro Anson Mk IV:
The Mk IV was almost identical to the MK III. It differed only in that is was equipped with two Wright R-975-E3 engines. A total of 223 aircraft were built.
Avro Anson Mk V:
The wooden Mk. V was a Canadian development of the Mk I. of which 1070 aircraft were built. The oval cabin windows of the civil aircraft returned and the aircraft was equipped two Pratt & Whitney R-985-AN-12B or -14B engines, rated 450 hp each.
Avro Anson Mk X:
The Uk built Mk X was in fact a Mk I with an enforced cabin floor. It was designed for transport purposes. Totally 103 examples were built.
Avro Anson Mk XI:
In July 1944 a version for passengers and ambulance was released. The fuselage was enlarged and the ceiling was raised, enlarged cabin windows were added. The type was equipped with two Armstrong Siddeley Cheetah XIX engines. Ninety examples were built.
Avro Anson Mk XII::
This type was developed from the Mk XI and equipped with two Armstrong Siddeley Cheetah XV engines, rated 420 hp each. 254 examples were built in two variant, Mk XII series 1 with the original wooden wings and Mk XII series 2 with metal wings.

After the Second World War the production was continued for a while.

Anson C.18
a aircraft for patrol and police duties for Afghanistan and India,
Anson C.19
a transporter built for the RAF and the Avro Nineteen, the civil version of the C.19.
Anson T.20
a trainer for bombers with clear nose, to be used in Rhodesia;
Anson T.21
which was equal to the T.20 but a solid nose
Anson T.22
a radio trainer for the RAF.

This aircraft type device was in the Royal Netherlands Air Force primarily used for multi-engine training and navigation training.

The Ansons were purchased in 1946 and arrived in 1947.
The D-1, D-4 and D-5 entered service just one year later in 1948.
The Ansons were stationed at the CLO at the airbase Gilze-Rijen. All armament was removed.

They differed from the Ansons used by 320 and 321 squadron during the early war. Especially the cowlings were now changed completely and were more tightly and also the canopy and wind screen had changed. Probably these adjustments are made during a general overhaul.
Furthermore, most Dutch Ansons, had the turret removed; an exception was the D-19, but this Boulton-Paul turret differed very much from the original turret.
There were a number of aircraft equipped with a closed nose and others had a glass nose.
Later, the aircraft also used for light transport duties, as well as a photo plane. 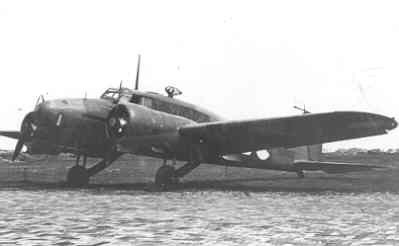 Avro 652A Anson Mk.1 in the RAF paint scheme.
[Enclosed photo from BeeldBank NIMH. Click on photo for ordering information] 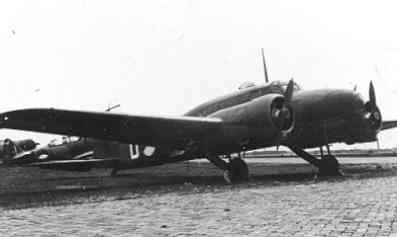 Avro 652A Anson Mk.1, in the RAF paint scheme.
[Enclosed photo from BeeldBank NIMH. Click on photo for ordering information] 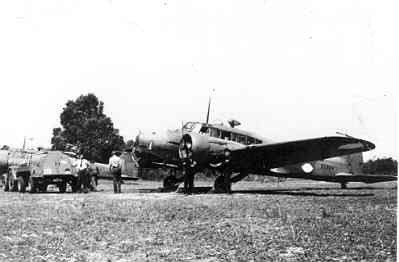 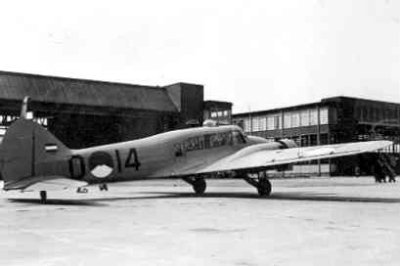 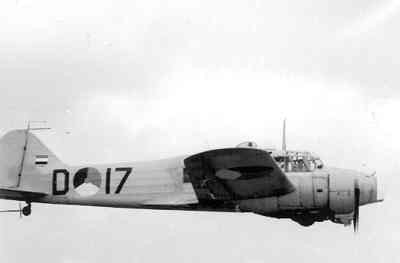 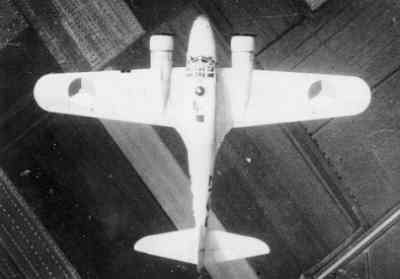 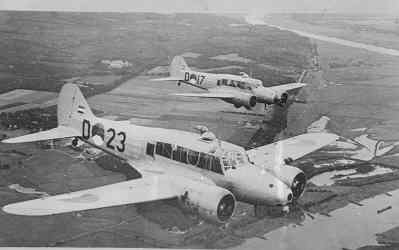 The Anson succeeded the Fokker T.VIIIw at squadron 320 based at RAF Pembroke.

The aircraft used came from several other squadrons. Some times they retained their original squadron and aircraft codes for a while.
See the serial list below for further information about each individual aircraft. The aircraft were mainly used for protecting convoys, and patrol flights and Search and rescue missions.
March 1941 at 320 squadron an A-flight was formed, equipped with Lockheed Hudson MK. I and a B-flight, with Anson. During 1941 321 squadron dissolved, because of lack of (Dutch) personnel. The aircraft went to 320 squadron.
The Anson's main function was changed to crew training for the rest of the war. 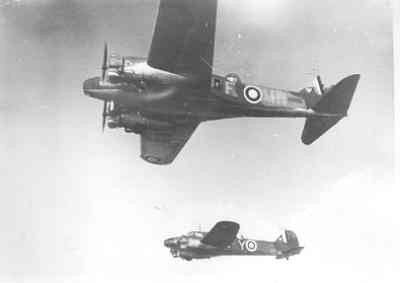 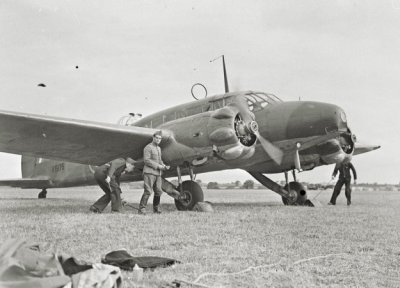 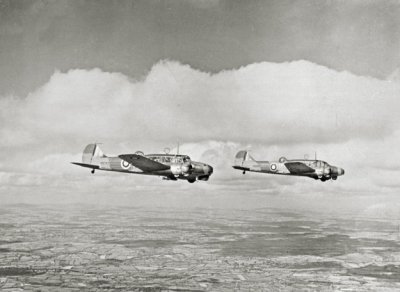 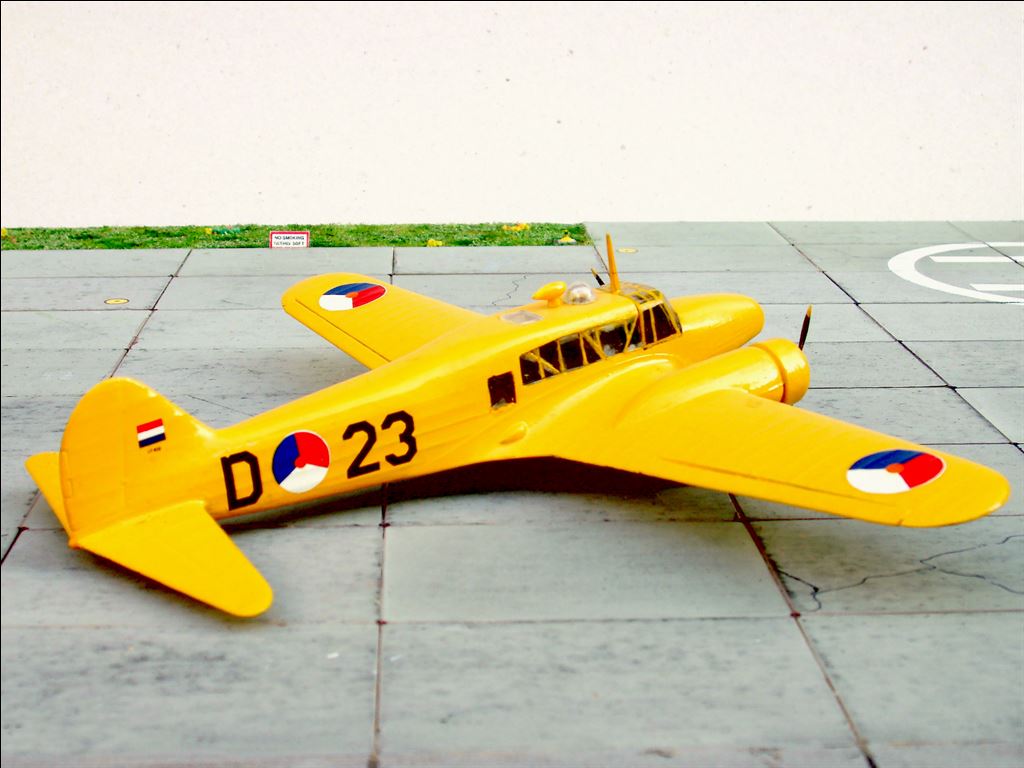 A model of an AVRO Anson I, built by Adri Kleijn.

RNlAF Scheme 1:
AVRO Anson Mk. I.
A post-war Anson I of the Dutch Air Force in the standard RAF camouflage scheme, about 1947.

RNlAF Scheme 2:
AVRO Anson Mk. I.
An Anson I in the standard RAF camouflage scheme applied in combination with the Dutch serial, about 1947.

RNlAF Scheme 3:
AVRO Anson Mk. I.
The camouflage scheme applied on an Anson with glass nose in combination with the Dutch serial.

RNlAF Scheme 3:
AVRO Anson Mk. I.
The camouflage scheme applied on an Anson with solid nose in combination with the Dutch serial.