As this resulted in problems regarding the availability of this engine, alternatives were tried, such as the BHP rated 230 hp, a RAF 3A rated 200 hp, the Siddeley Puma rated 230 hp or a Fiat rated 260 hp. These test resulted in a weaker performance.

The aircraft was of a rather conventional design, with rather wide cockpits separated from each other by the fuel tank.
For the observer one or two rotatable machine guns were available. As forward armament was one fixed, synchronized Vickers machine gun mounted on the nose.
As bomb load a load of two bombs of 104 kg each, or four bombs of 51 kg each could be carried.
Communication between both crew members occurred via a speaking-tube. In the end in England 1449 DH-4s were built, after the war another 15 examples were built by SABCA, Belgium.

Also in the US this type was built, equipped with the Liberty L-12 engine rated 400 hp. A 9500 aircraft were ordered, of which almost 1900 examples were sent to the front in France.
After the war especial Boeing surplus DH-4s were upgraded tot DH.4B standard under the designation Boeing model 16.

The DH.4 proofed to be very successful because of its reliability and good performance.
The performance of especial those equipped with the R.R. Eagle VIII were of such a level that no escort was necessary.
The location of the fuel tank was such that it influenced communication between the crew members in a negative way and it was very flammable when under attack.

The problem with the fuel tank was solved with the later, but less performing DH.9. The DH.9A, a DH.9 equipped with an American Liberty engine performed much better.

In the USA the DH.4 was mainly built by Dayton-Wright and Fisher Body. As armament two fixed .30 inch machine-guns mounted on the nose and two manoeuvrable .30 inch machine-guns for the observer were available. The bomb load was about 200 kg.
The performance of this American version was almost the same as the Rolls Royce version. This American DH-4 was nicknamed Liberty plane and was very popular with the American crews.
The DH-4 was also used by the United States Navy and the US Marine Corps, during and after the war.
The US Navy received 51 DH-4's during the war plus another 172 DH-4B's and DH-4B-1's after the war. In 1925 an additional 30 DH-4M-1s with a steel tube fuselage frame. (designation O2B).

DH.4:
The original version, which was also built in the US with a Liberty engine.
DH.4A:
Pre-war version with a cabin for two passengers, just aft the pilot.
DH.4R:
A single seat race version equipped with a 450 pk Napier Lion engine.

On june 17, 1918 a DH-4 landed op airfield Middenreduit near Vlissingen and was interned as H432. Like most of the interned aircraft it was withdrawn from used during 1920.

Source: A research of Van Zwieten, via F. Gerdessen. 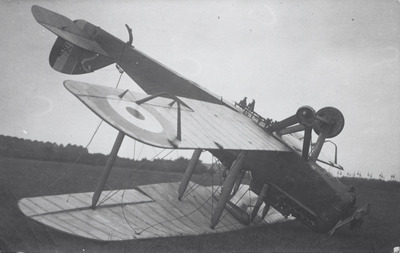 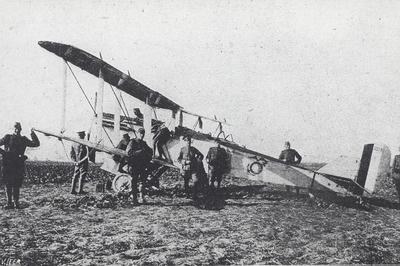 Special thanks to F. Gerdessen for providing me with information about the serials of the Dutch DH-4.