In June 1958 Vertol received a contract for one YHC-1A, which could carry 20 men. During the testing period the US Army thought the YHC-1A to light for the transport role an to heavy for the attack role. It was decided to upgrade the UH-1 Huey  and use is for tactical transport and to obtain an heavy transport helicopter.

The YHC-1A was developed further and used by the US Marines as CH-46 Sea Knight in 1962.

The US Army ordered a larger and heavier version, Model 114, designated as HC-1B. The first pre-production machine Boeing-Vertol YCH-1B (Vertol was merged with Boeing to Boeing-Vertol) made its first flight on September 21, 1961. In 1962 the designation was changed in CH-47A "Chinook".

The new helicopter was powered by twin-shaft turbine engines, initial two Lycoming T-53 of 2200 hp, each mounted at the rear of the fuselage. Later models were equipped with upgraded, more powerful engines. Moreover, the two rotors rotate against each other in order to compensate for the torque and could be controlled separately. In case of failure of one of the engines the remaining engine can drive both rotors.

The Chinook was further developed in the course of time and improved and more powerful versions were released. The CH-47D was a major improvement with better engines, composite rotor blades, redesigned cockpit, improved electrical systems and avionics.

Also a civilian version, designated Boeing-Vertol Model 234 was developed and mainly used in the oil industry.

HC-1B:
pre 1962 designation of the Boeing-Vertol Model 114
CH-47A:
349 examples of the first produced version for the US Army; initially equipped with two Lycoming T55-L-5 engines rated 1640 kW, later two Lycoming T55-L-7C rated 2130 kW.
CH-47B:
108 examples of an interim version equipped with two Lycoming T55-L-7C engines of 2130 KW each. Modifications were the Adjustments were the blunted rear rotor pylon, redesigned asymmetrical rotor blades and guides along the tailgate and trunk to improve the flying characteristics.
CH-47C:
Boeing Model 234. 233 examples built. Equipped with more powerful engines and gear boxes. The first examples still had the Lycoming T55-L-7C engines rated 2130 KW each, later two Lycoming T55-L-11 engines rated 2800 kW each were installed. Canada ordered eight examples designated as CH-147. These were equipped with a hoist and a station for the Flight Engineer in the rear cabin.
CH-47D:
Used the same airframe in combination with powerful engines.Initially the Lycoming T55-L-712 was used, soon replaced with the Lycoming T55-Ga-714A. The CH-47D could carry an external load of 12 tons with the triple cargo hook system. Also the avionics were improved with e.g. GPS.The first CH-47D entered service in 1979. The Us Army had nearly all its Chinooks, 472 examples. upgraded tot CH47D standard.
MH-47E:
26 examples of a version for the US Army Special Operations. Similar to the MH-47D but with enlarged fuel capacity and terrain radar.
CH-47F:
Released in 2001; the prototype was an upgraded CH-47D. Can carry 9,5 ton external load. the CH-47F has a upgraded airframe construction; two Honeywell T55-L-714A engines rated 3630 kW each and renewed electronics like a Rockwell Collins Common Avionics Architecture System (CAAS) and a BAE Systems Digital Advanced Flight Control System (DAFCS). The US Army ordered 48 examples ; The Netherlands ordered six examples replace lost CH-47Ds and to expand the existing Chinook fleet.
MH-47G:
similar to the MH-47E, but with upgraded avionics and systems as CH-47F. The remaining 11 MH-47Ds and 25 MH-47Es will be modernized and an additional twelve examples will be built.
Japanese license version of the CH-47D, 61 examples built by Kawasaki. Differs in engines and avionics.
HH-47:
[to be developed] Combat Search and Rescue (CSAR-X) version based upon the MH-47G. 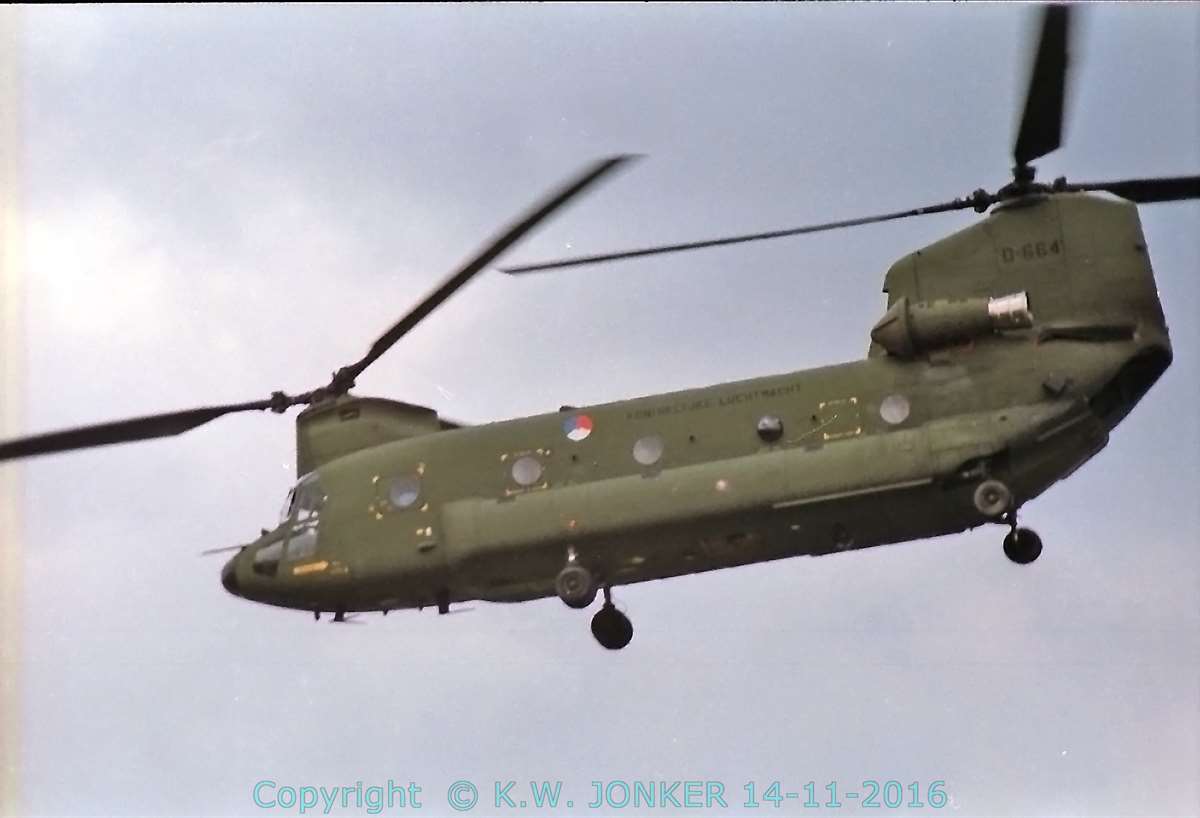 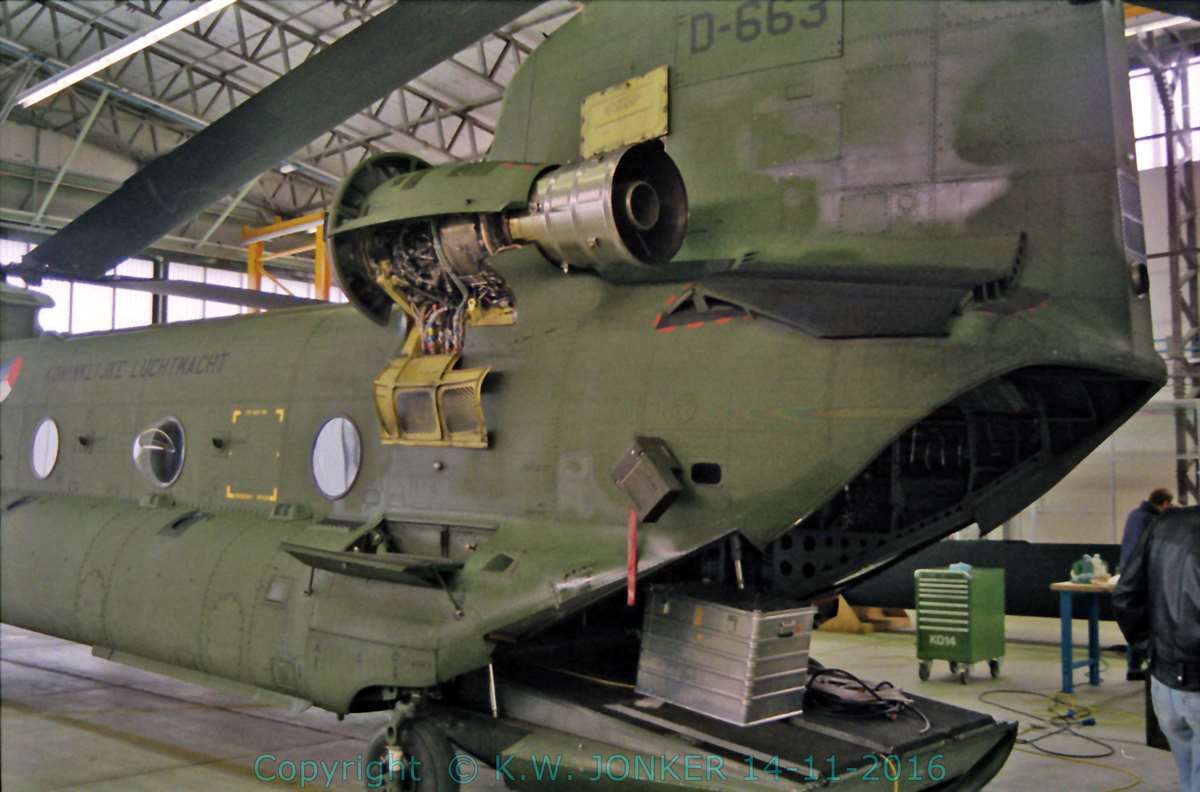 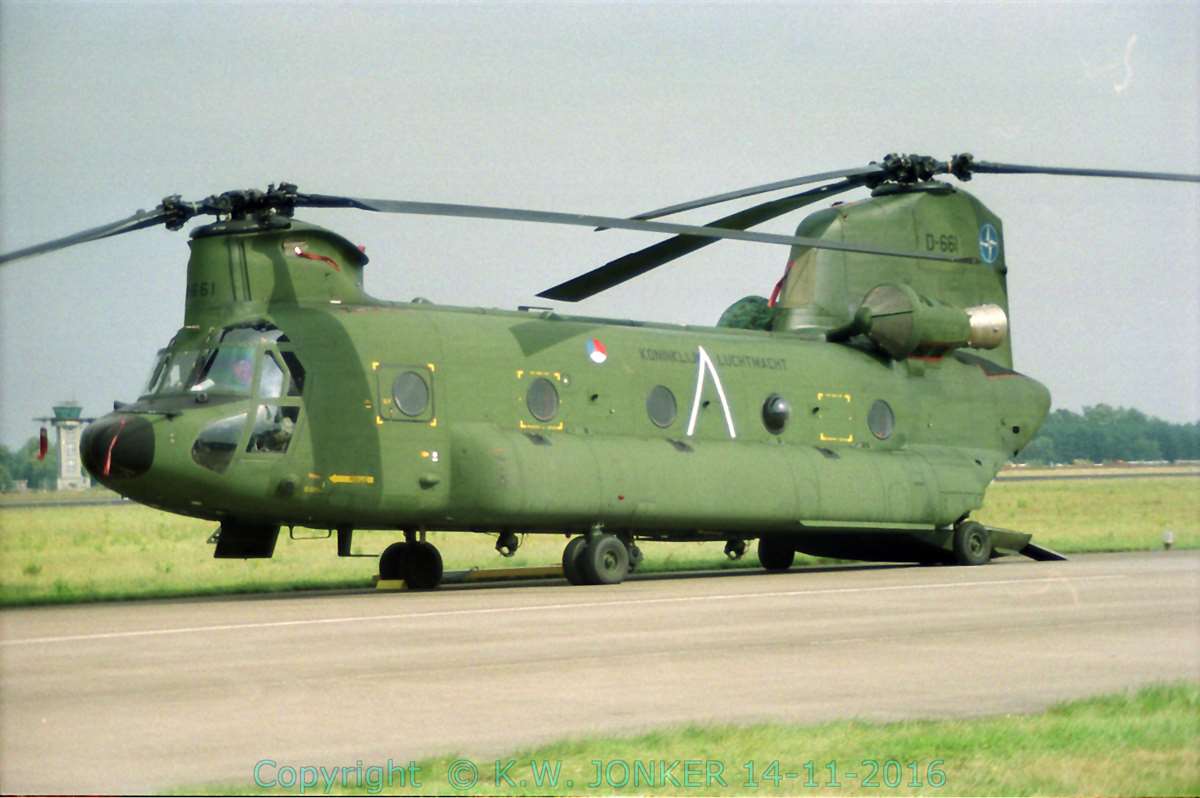 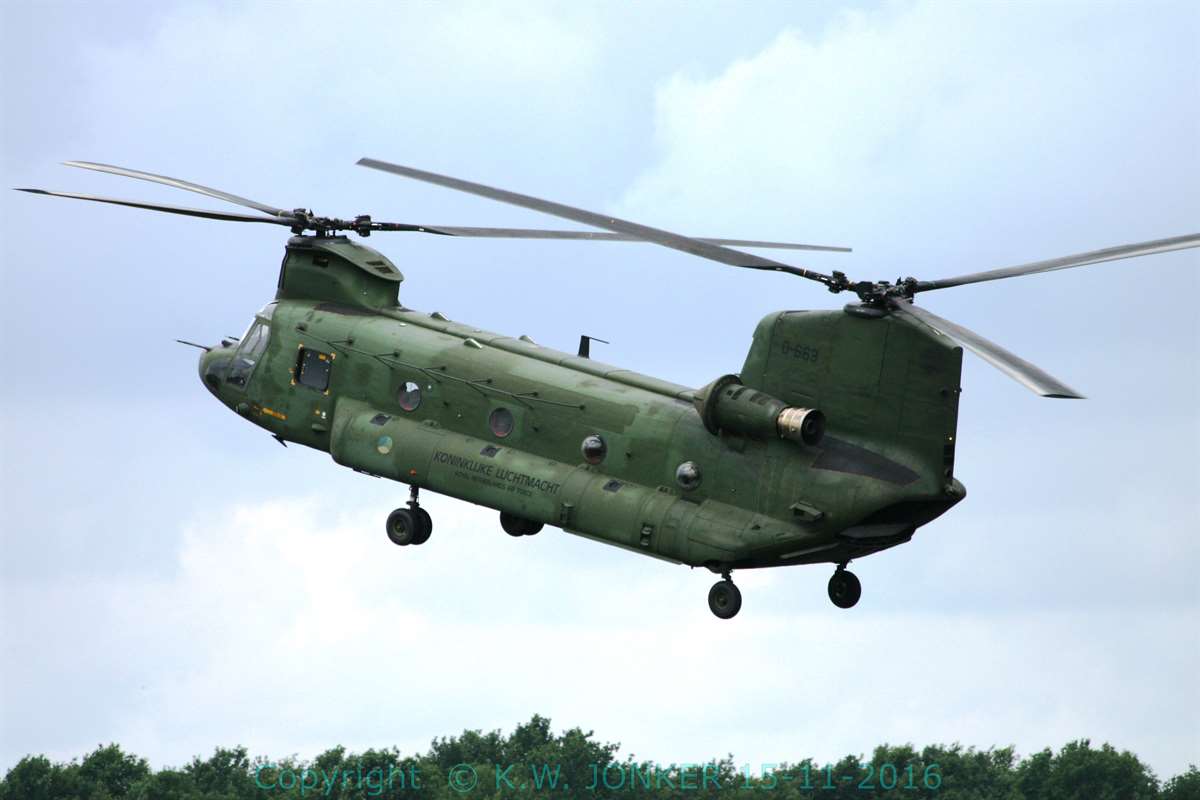 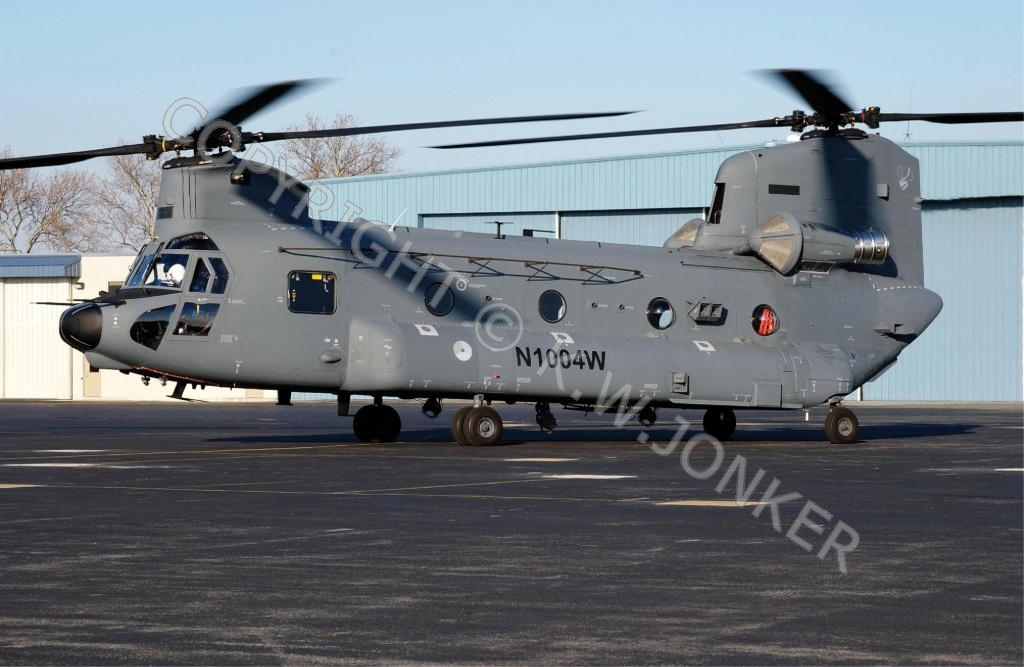 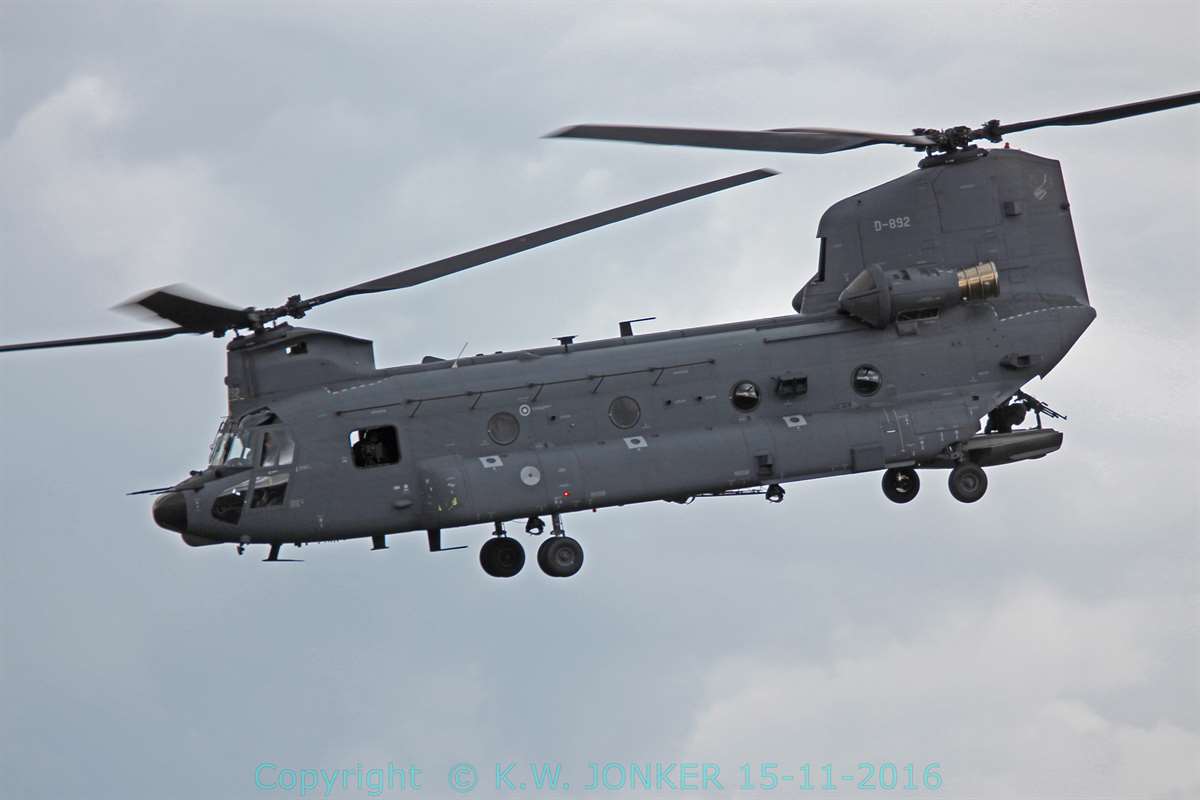 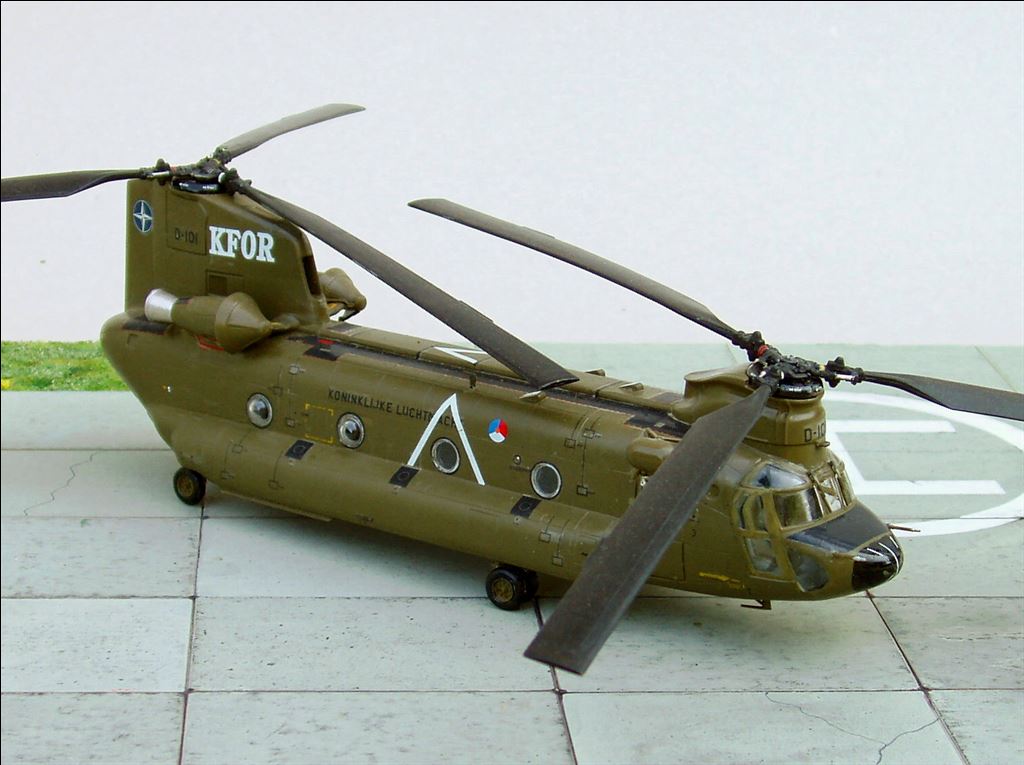 A model of a Boeing-Vertol CH-47D, built by Adri Kleijn. 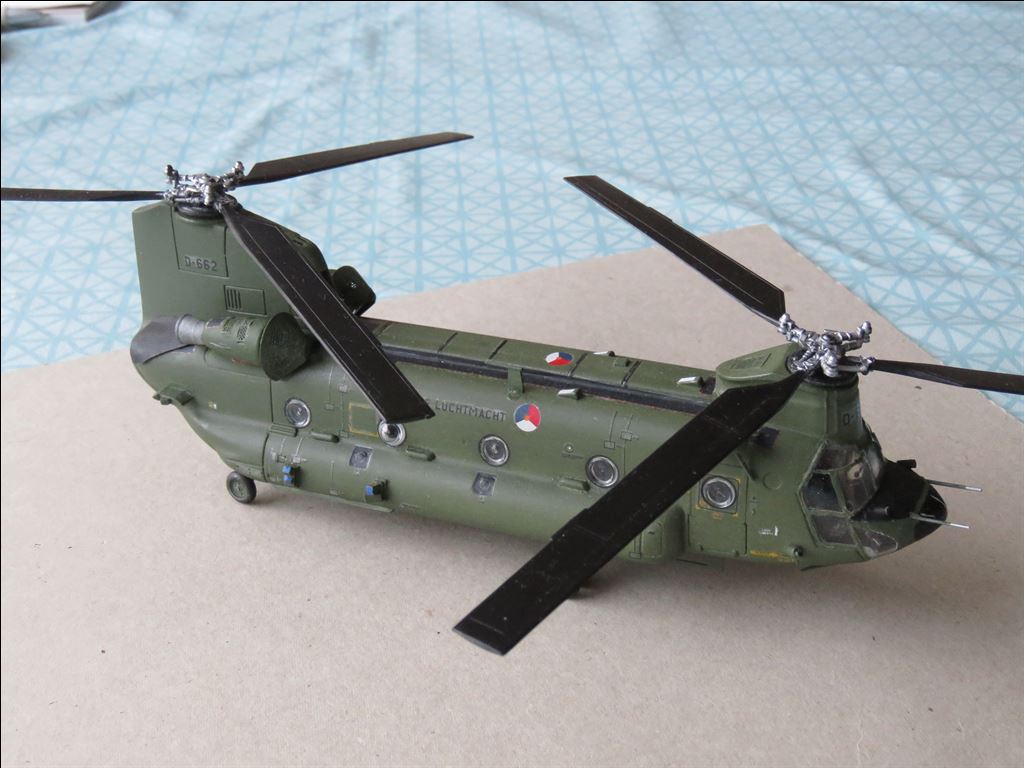 A model vof an early Boeing CH-47D. I used the Matchbox kit and modified the nose, using the nose of the Italeri kit. 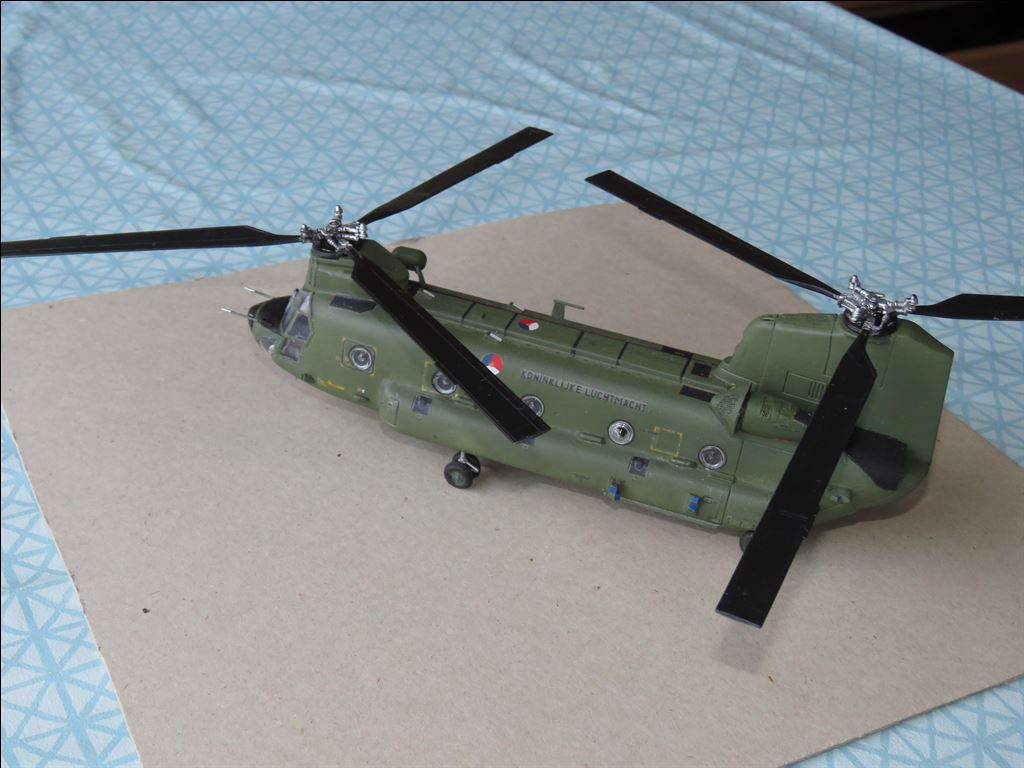 Further is added some antennas and protection plates near the exhaust. Decals used come from the Dutch Decal set 72050 ( a nice set!)
The kit was finished (mainly adding antennas, rotection plates, windows and some decalling plus topcoat) by Adri Kleijn. Thank you very much!! 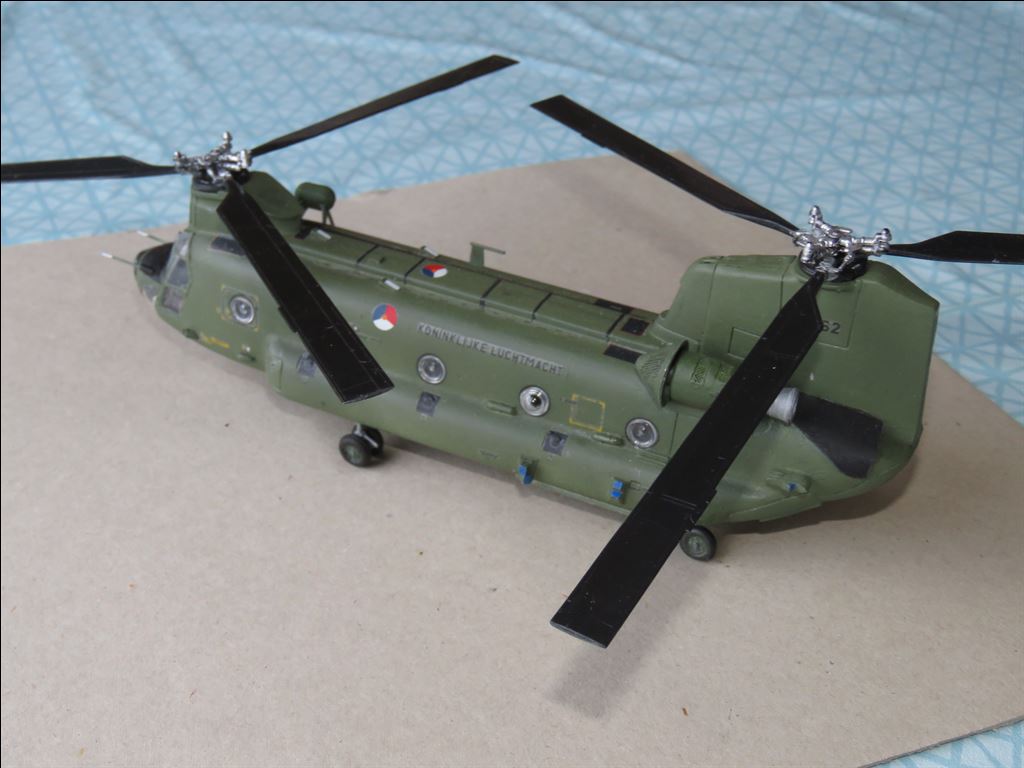 Delivery scheme of the first (revised) Chinooks.
Note the protection near the exhaust of the more powerful engines.

Delivery scheme odf the second series of Chinooks.
The protection plate has been omitted s the exhausts have ben repositioned and are pointing more upwards and outwards. Later retrofitted to the first series.
Further the antennas and markings have changed.

Delivery scheme of the CH-47F Chinook.