In 1938, Consolidated Aircraft received the request to produce B-17s. The chief engineer, David Davis, however, came with its own wing design with a 15% reduction in air resistance. A rough draft was made of a four-engine aircraft with this wing.
The USAAC ordered in March 1939 the construction of a prototype of the Consolidated Model 32, USAAC designation XB-24. The aircraft with two tailfins had a unique construction of the bomb bay, which consisted of two parts, they rolled up like garage doors. The crew went through the bomb bay inside the aircraft. Equipped with four Pratt & Whitney R-1830-33 Twin Wasp engines of 1100 hp each unit had a maximum speed of around 440 km/hr. Furthermore, it was the first heavy bomber of the USAAF with a nose wheel undercarriage.

Even before the first flight was made Consolidated received an order to built seven test aircraft, designated YB-24. France also placed an order, which later went to the RAF.

Mid 1939 the USAAF ordered 120 units of the B-24, of which 20 examples were handed over to the RAF as Liberator I, which used them, equipped with radar and four 20mm cannons used in the nose , for anti submarine warfare.
Because the performance was disappointing, the XB-24 was ordered with four turbo-charged engines, Pratt & Whitney R-1830-43 of 1200 hp each, which gave the aircrfat, now designated XB-24B a top speed of nearly 500 km/hr. The XB-24B was equipped with self-sealing fuel tanks, and a larger span.
The stability and maneuverability of the B-24, would be improved with one vertical tail fin in place of the standard double tail. The B-24ST and XB-24K were equipped with a single fin and demonstrated this fact. The B-24N was the first version with a single tail that would enter production, but the order was canceled because of the end of the war. Only the B-24 derivative PB4Y Privateer went into production.

The B-24C was the first version in which the war experiences of the British were processed, though just nine examples were ordered  which didn't enter operational service.

The first operationally deployable version was the B-24D, of which over 2700 were produced in a variety of sub-variants or production blocks.

In order to meet the demand for more firepower the B-24H was released with an Emerson A-15 nose turret and an improved tail and dorsal turret.

The B-24J appeared and was different from the B-24H especially the applied Convair A-6A nose turret, because the A-15 turret was not sufficiently available. Furthermore, the B-24J had an improved C-1 autopilot, new M-series bomb aim system, an improved fuel supply and an electronic control system of the turbo-superchargers.

The weight of the B-24 rose during development which had a negative impact on performance because the engines remained the same. A total of over 6600 examples of the B-24J were produced on all production lines.

XB-24:
Prototype; first flight on December 29, 1939.
YB-24:
Pre production version. Seven examples built. six of them delivered to RAF as LB-30; The seventh aircraft was delivered to USAAC as 40-702.
B-24:
first production version; Ordered on April 27, 1939. One modified YB-24: added were de-icing boots; leading edge slots were omitted.
B-24A/LB-30B:
First real production version with improved aerodynamics. Nine examples were delivered to USAAF Ferrying Command and twenty examples were delivered to RAF as LB-30B .
XB-24B:
one modified and improved XB-24 with four Pratt & Whitney R-1830-41 turbo-supercharged radial engines of 1200 hp each replacing the Pratt & Whitney R-1830-33 of 1000 hp. Top speed was about 60 km/hr higher. Because of the turbo-superchargers the cowlings were more oval in shape.
B-24C:
Negen examples of the production version of the XB-24B, equipped with a hydraulic Consolidated A-6 turret with two .50 machine guns; a Martin dorsal turret.
B-24D:
First version entering large scale production. Improved B-24C with four Pratt & Whitney R-1830-43 supercharged engines. Initially a ventral Bendix turret, because of problems later replace by a single .50 inch machine guns in a "tunnel". later also a Sperry turret was added.
The last series of the B-24D had two machine guns mounted under the nose.
2696 examples were built at several production lines.
B-24ST:
experimental version of B-24D with tail of a Douglas B-23 Dragon. This configuration proved to be more stable and more manageable.
XB-24K:
one modified B-24D, developed from B-24ST with tail of a Douglas C-54. Was further developed to PB4Y-2 and B-24N.
B-24E:
over 800 examples of a Ford bult version  of the B-24D with Pratt & Whitney R-1830-65 engines and no ventral turret. Mainly used for training purposes.
XB-24F:
One modified B-24D for testing of thermal de-icing.
B-24G:
25 examples of the North American built B-24S with a Sperry turret and three machine guns in the nose.
B-24H:
3100 examples with heavier frontal armament; an electrical operated Emerson A-15 turret; strengthened airframe; modified tail turret and an Martin A-3 dorsal turret. The position of the side gunners had windows added.
B-24J:
6678 examples of a further improved version: the A-15 turret was replaced by a hydraulic Consolidated A-6 turret. Further an improved aut pilot and bomb aim installation was added.
B-24L:
1667 examples of a lighter version of the B-24J, in which the turret Sperry ventral turret was replaced by a ring arrangement with two machine-guns, and the A-6B tail turret replaced by a M-6A turret.
B-24M:
2593 examples of this last, further improved version van B-24L with further weight savings; a light weight version of the A-6B tail turret; open positions for the side gunners; re introduction of the Sperry ventral turret and, later a wind screen with less bars.
XB-24N:
re-design of B-24J with a single tail and an Emerson 128 turret in the nose and fixed tail guns, One example built.
YB-24N:
seven examples of the pre-production version of the XB-24N
XB-24P:
one modified B-24D for testing a fire extinguisher.
XB-24Q:
one General Electric modified B-24L with radar operated tail turret (as used in the Boeing B-47 Stratojet.
XB-41:
one modified B-24D with extra armament. To be used as an escort aircraft. The performance was very disappointing.
C-87 Liberator Express:
First transport version suitable for twenty passengers.
C-87A:
VIP transport version with four R-1830-45 engines and and sleeping accommodation for sixteen passengers.
C-87B:
Armed transport version. Not produced.
PB4Y-1:
976 examples of the B-24D, B-24J, B-24L and B-24M for US Navy.
PB4Y-2 Privateer:
version with enlarged single tail and other modifications.
P5Y:
Never built patrol version with two engines


These aircraft were used at 321 squadron, RNlNAS and succeeded the old Catalina’s.

During 1942 the fresh crews educated at RNMFS, Jackson, requested more action than the rather passive patrols with the Catalina's. Admiral Helfrich agreed with this and tried to find a more offensive role for 321 squadron.
Because of the structure of the defence system this was not possible. 321 squadron was a maritime patrol unit, resorting under 222 General Reconnaissance Group, RAF India.

At the end of 1943 this structure was revised because of the changed situation and Air Command South East Asia was raised. The British would provide a unit with four engined bombers. They should receive about two thousand Liberators.

Because of the high demand for this bomber it took a long time to carry out the plans. In 1944 the Liberators were delivered to the British. After a lot of discussions in November 1944 at last permission was given to raise a Dutch Liberator unit.
Several crew were detached temporarily at No. 1673 Heavy Conversion Unit, Kolar and at 160 squadron RAF, Kankesanturai, Ceylon. Several surplus Catalina’s were returned to RAF. The first delivered (ex British) Liberators were in very poor condition. It took the technical crew a lot of work to get these aircraft in flying condition.

Twelve aircraft should delivered to the unit, but it took until May 1945 before seven new aircraft were sent by the British head quarters.
Now the training program could continue and in July six crew were completely trained. Squadron 321 was now assigned a new air base, at Cocos-islands. Its task was to prevent the Japanese navigation as much as possible.
During the night of 8 to July 9, 1945 the first three aircraft departed for the new base. Alas KH296/J crashed in sea just after take off, killing six of the crew. Fortunately five men could be saved. Some days later two other aircraft were flown to the Cosos Islands.

The task of squadron 321 changed. Because of the situation in the prison camps the Liberators were used for supply in September 1945 and food en medicines were dropped.

In September 1945 a memorable flight was made with “Z”. Squadron leader OVL1 A.J. de Bruyn was allowed to fly the liberated Gouverneur-Generaal of Dutch East Indies, Jonkheer Mr. A.W.L Tjarda van Stakenborgh Stachouwer and the commander of the army General H. ter Poorter to the Netherlands.
They started in New Delhi and flew via Karachi, Caïro, Lydda, Istres and Hartfor Bridge to Eindhoven. October 8, 1945 they started to fly back to Dutch East Indies, but they were forced to stop at Colombo, because of the tumultuous situation at Batavia, the capital of the Dutch East Indies.

Despite the need for transport aircraft, the crew were set aside. Just in January 1946 the message was spread that the Liberators had te be returned to the RAF.
Because air base Perak was unsuitable for the large Liberator and air base Merauke was crowded with aircraft parked there, the aircraft could leave China Bay just in April 1946 to air base Morokrambangan. Liberator Y was left behind, and Liberators “A”, “B”, “M”, “P” and “W” were flown to Morokrembangan and were parked there until the end of May 1946, when these aircraft were handed over to the RAF. 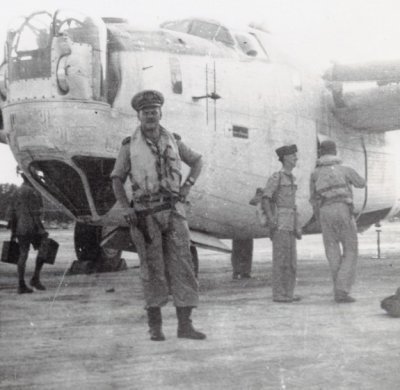 Detachement of VSQ 321 on the Cocos isles, 1945.
[Enclosed photo from BeeldBank NIMH. Click on photo for ordering information] 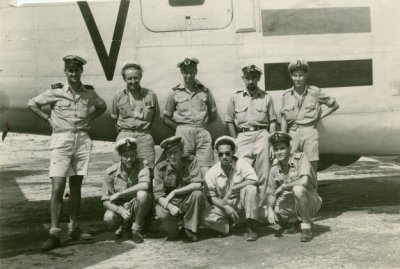 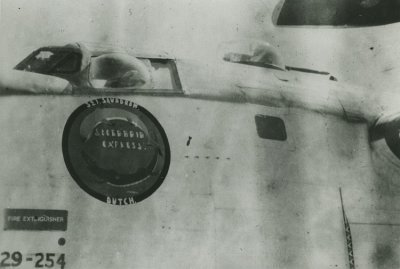 Marking on a `Consolidated B-24 Liberator 'Soerabaja Express', squadronn 321 RNlAS, based on Ceylon during 1942-1945
[Enclosed photo from BeeldBank NIMH. Click on photo for ordering information] 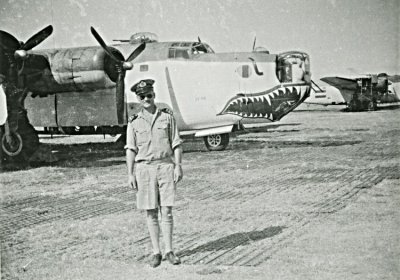 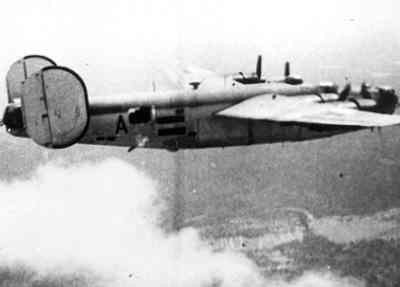 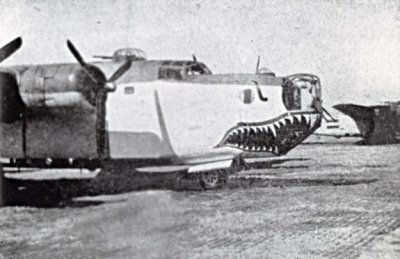 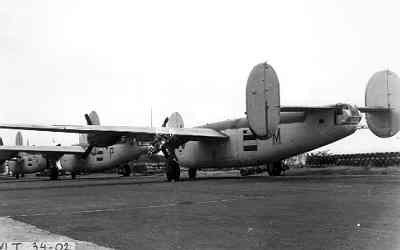 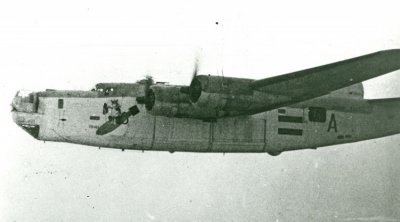 Consolidated B-24D Liberator MK. III.
Two examples of this type were used by the Dutch to convert to the Liberator. The aircraft kept (most problably) their RaF colur scheme and markings an received no Duthc marking.