The Curtiss Hawk 75 was developed in 1933/1934 as a private initiative of the Curtiss factory. The all-metal aircraft had a Wright XR 1670-5 radial engine of 900 horsepower.

The prototype was equipped with a .30 inch and .50 inch machine gun, at that time the standard armament of the USAAC.

Later that month there was a USAAC competition for the delivery of a new fighter.

However, the P-35 Seversky competitor crashed on the flight to Wright Air Force Base, Ohio, and had to be rebuilt.

Curtiss had therefore time to improve the aircraft and exchanged the engine for a Wright XR 1820-30 of 910 horsepower and gave the renewed machine the designation Curtiss 75D, while the first prototype was designated as Curtiss 75B.

These performed very well, so in 1937 an order for 210 examples, designated as P-36A followed. Because of a variety of childhood diseases such as blistering of the aircraft skin at the wheel well, problems with the exhaust and weaknesses in the airframe, the aircraft was not used much operational, so it was considered  to be outdated when the problems were solved and became the type was transferred to training units.

France was already interested in the type before the P-36A entered in production. But because the Curtiss 75 costs almost twice as much as the French Bloch MB150 and Morane MS406, after a period and mainly because of the political tensions a first order for 100 Curtiss 75 A-1 or H75-SC1 with Pratt & Whitney R-SC -1830-G and French equipment. France received over 300 aircraft.

The Curtiss Hawks were ordered in September 1939 because of the threat of war. From May 1940, the aircraft were rapidly delivered to the Dutch East Indies.
A follow-up order of 24 examples was not honoured by the U.S. government for a lack of large motors due to the increased threat and act of war.

During February 1942 the remaining Hawks were withdrawn from operational use, because of the unreliable engines.

When the Netherlands East Indies capitulated no Hawk was left. 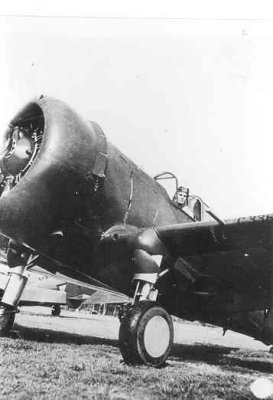 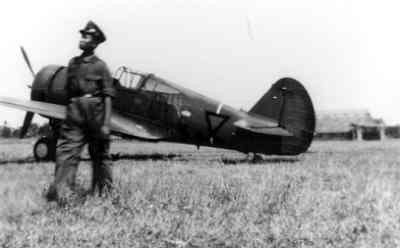 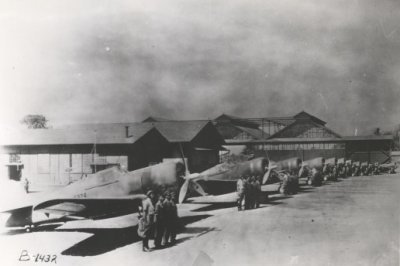 Air base Andir near Bandoeng (West-Java) with  line up of Curtiss Hawks during the 30s.
[Enclosed photo from BeeldBank NIMH. Click on photo for ordering information]

Delivery scheme of the Curtiss Hawk 75-A7 RNEIAF.

Camouflage scheme of the Curtiss Hawk 75-A7 RNEIAF.