The US Navy requested the development of one twin engined aircraft in order to replace the teams of two single engined Warner and Strike aircraft, like the Avenger and Guardian. Grumman released Model G89 in in 1949 a twin engined ASW aircraft designed based up the specifications of the US Navy. In June 1950, after the G89 has been evaluated, Grumman was ordered to built two prototypes, with the designation XS2F-1. The first aircraft, bu.no. 129137 made its maiden flight early December 1952; the second prototype, BuNo 129138, in February 1953.
Extensive tests by the US Navy resulted in an initial order for fifteen aircraft, designation S2F-1.From 1962 the US NAVY changed their type designation and the S-2F-1 was now designated as S-2A.

S2F-1:
The S-2 was equipped with an AN/APS 38 search radar in a retractable, somewhat streamlined radome. [The retracted radome extended about 15 cm out of the fuselage; when it was lowered it extended about 62 cm.] Also a retractable MAD boom was, its extended length was 2,74 m. The first aircraft were also equipped with a bipolar APA-69 ECM direction finder on the cockpit. This was soon replaced with an APA-69 in a radome. Initially a searchlight of 70 million candle was mounted in the right wing, later this was replaced with one of 85 million candle. The bomb bay could contain torpedoes, bombs or depth bombs.
Under each wing three HVAR rockets or bombs could be hung. Aft of the nacelle eight SSQ-2 sonobuoys or a couple of larger SSQ-1 sonobuoys could be carried. Also fifteen SUS (Signal-Underwater-Sound)devices could be carried. These devices gave a small explosion under water, so the echoes could be analysed. Later the back of the nacelle was more streamlined.
Totally 755 aircraft were built, 130 examples were exported under MDAP conditions. Canada built another 99 examples of the S2F-1
US-2A:
An utility version, used to replace the C-45. All ASW equipment was removed, The back of the nacelles was closed. This version was also used for target towing.
S2F-1T:
This was a version for multi engine training. Also all ASW equipment was removed. later this version was designated as TS-2A. It was possible to carry practice bombs and torpedoes.
US-2B:
This was also a modified S-2F-1. It differed from the US-2A in that it could carry five passengers. The former bomb bay could contain extra fuel tanks.
S2F-1S:
An interim version, later designated as S-2B, was in fact a modernized S-2A. Modification was mainly the electronics, and installation of the JEZEBEL and JULIE acoustic systems.
S2F-1S1:
This was a modernized S2F-1 too, later designated as S-2F. Especial the ASW equipment was modernized and an improved JULIE-system was added.
S2F-2:
a later version which had an enlarged bomb bay, strengthened under wing suspension points and an enlarged stabilizer with about 12 cm.
Sixty of this type were built. Many were modified to US-2C. A small number were modified for photo reconnaissance duties.
S2F-3 (S-2D):
this was the third Tracker-variant, built by Grumman. Hundred of this version were delivered. The APA-69 ECM radome was removed; the original bomb bay was applied; totally 32 sonobouys could be carried. The engines were of an improved version and the wingspan was enlarged with 91 cm. Wing tips were rounded and contained ECM equipment.
S2S-3S:
this type was the last production version. An extra radome was added, a retractable blade antenna; internally the ASA-31 radar was replaced with the ASN-13 system, the auto-pilot was replaced with a more modern one and the fuel capacity was enlarged.

CS2F-1:
was delivered to the Canadian navy in February 1957. Totally 99 aircraft in two versions were built.The CS2F-1 differed from the S2F in the antennas and the lack of the APA-69 ECM radome on the canopy. most aircraft had a small antenna on the same location.
CS2F-2:
An improved version. The improvements mainly regarded the ASW sensor, the MAD-system and a modernized radar.
Externally the CS2F-2 differed from the CS2F-1 in the antennas.
CS2F-3:
In the period 1964 and 1967 a MLU was started. An ASN-501 tactical computer navigation system; an APN-03 doppler radar and improved JULIE/JEZEBEL-sensors were built in. The improved aircraft, also modified S2F-1 and S2F-2 aircraft, were designated as CS2F-3. 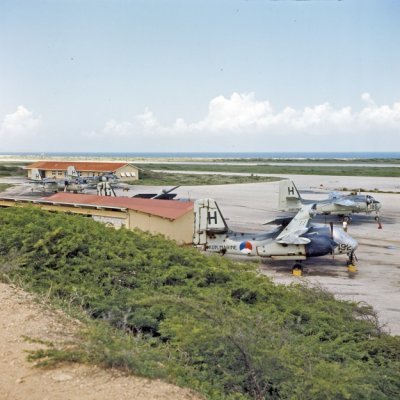 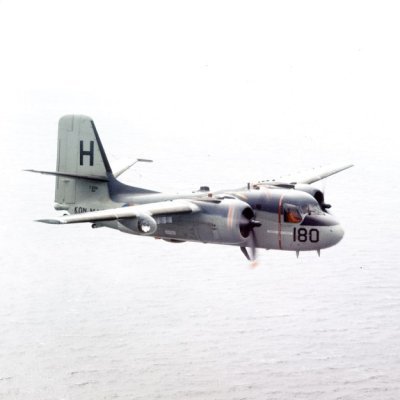 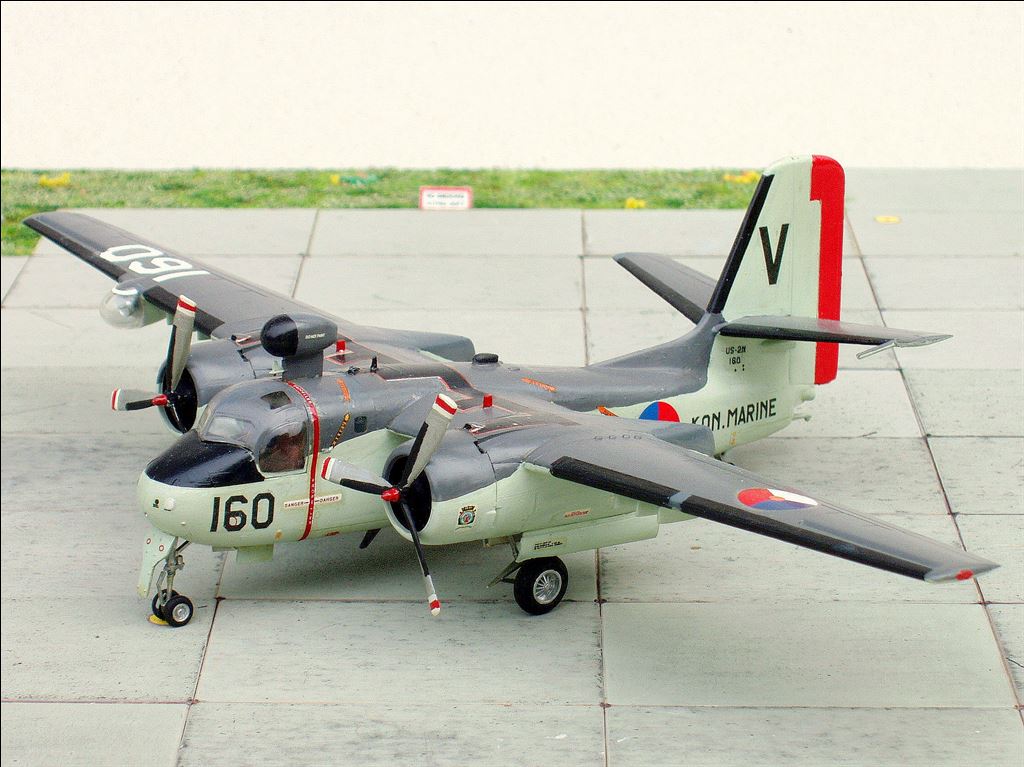 A model of a Grumman US-2N Tracker, built by Adri Kleijn. 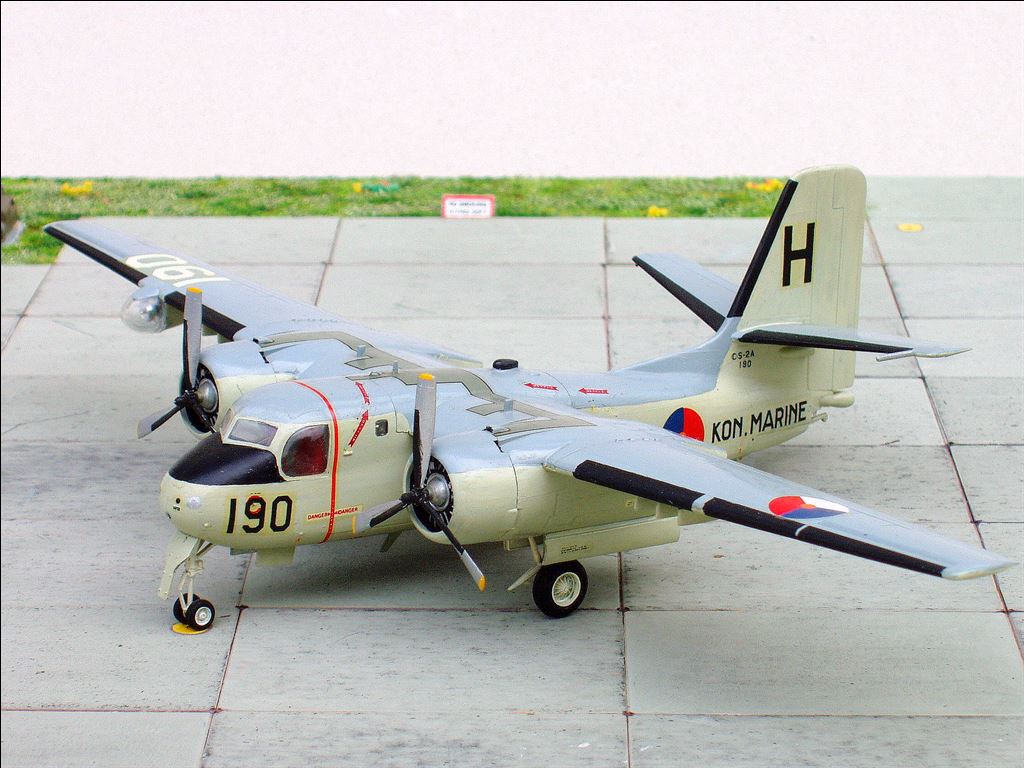 A model of a Canadair (Grumman) CS-2A Tracker, buitl by Adri Kleijn.

At the (Dutch) site Vlaggeschipsmaldeel5.nl one can find many photos about the Dutch Tracker, also an extensive photo session of Tracker 160.

At Http://hedgehoghollow.com/buzz/Colour_Guide/rcnair_clr.html is referred to FS36099 (ca H-123 and X-376) on the upper surfaces and FS16314 (X-143) on the lower surfaces of the Canadian Trackers. When compared with photos and colours at Http://www.ipmsstockholm.org/colorcharts/stuff_eng_colorcharts_fs.htm , FS ~6270 might be a better match than FS ~6314.

After an overhaul several Canadian Trackers were sprayed in the same colour scheme as the US Trackers. The Anthony Fokker-school had a CS2F-1 184/H, in this colour scheme. Nowadays this Tracker is on display at air field De Kooy, Den Helder.

The spinners were mostly painted black, but sometimes the squadron colours were applied.squadron 320, orange; squadron 4 blue and squadron 2 in red. The interior of the CS-2F’s was dark green; US-2 were more yellowish. Instrument panels in black. Seat were orange.