The Koolhoven FK-43 was a small four seat airplane, which was designed for the American multimillionaire Van Lear Black. Koolhoven. It was based on the FK-41.
In 1930 Koolhoven received the assignment and started the construction of the aircraft. In August, however, Van Lear Black fell overboard from his yacht and drowned.

Because the French firm Baxter Aviation was interested to build the device under license, the prototype was completed and made its first flight early 1931.
In 1932 the aircraft was transferred to France to serve as a production model for Socieéte Anonyme Francais d'Aviation (SAF) as Baxter was now called.
However, SAFA went bankrupt that same year and so there was never a FK-43 built in France.

Koolhoven had already managed to interest the KLM and one example was built.
This was equipped with dual controls and also had a different undercarriage, a tail wheel and a bigger fin and other nose  compared with the prototype.
In 1933 an order for another three aircraft was placed, which were delivered at the end of that year. They were used as air taxis. Later Koolhoven obtained another order for three aircraft which were delivered in early 1935

In 1938, two more aircraft, PH-ASN and PH-ASO were delivered to replace depreciation after accidents.

Further, a example was built in 1932 for De Levers Soap Company and in 1936 one aircraft for C. Misset in Doetinchem.
This unit PH-MCD (c / n 4310) was equipped with flaps and a fully floating wing.


During the mobilization three KLM aircraft were claimed and used as liaison and training aircraft. 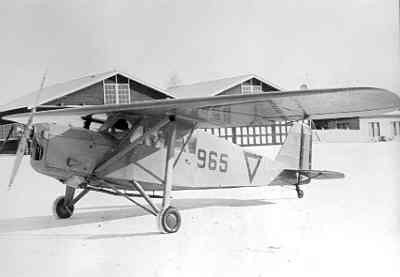 In September 1939, the PH-CMD was sought and received registration 960.