At the beginning of the Korean war in 1950, it was found that the used transport aircraft no longer met the expectations.
In February 1951, the USAF issued a General Operating Requirement (GOR) for a new transport aircraft and sent it to American aircraft manufacturers such as Boeing, Douglas, Fairchild, Lockheed, Martin, North American and Northrop.
The aircraft must have a capacity of 92 passengers, 72 soldiers or 64 paratrooper. The loading space had to be about 12m long, 2.7m high and 3m wide.
In addition, it had to be fitted with a large tailgate on the rear of the hull.
Of the nine requested manufacturers, only Boeing, Lockheed, Chase, Douglas and Airlifts Inc. responded with a total of ten designs.
In th end the designs of Douglas and Lockheed remained.
Lockheed came with a design that looked a bit like the twin-engined Chase XCG-20 Avitruc, which was derived from a 1947 freight glider.
The Lockheed loading cap, whiich Lockheed designated as Lockheed L-206, was so designed it was possible to drop cargo from the air.
The aircraft had a flying range of about 2070 km, could operate from short and unhealthy runways and could also take off on three engines.
Lockheed won the contract for the construction of two Lockheed Model 82 prototypes, or YC-130 as the USAF indicated the type in early July 1951.
On August 23, 1954, the second prototype, 53-3397 made the first flight.
The device was equipped with four turboprops.

Lockheed C-130A Hercules (Lockheed Model 182-44-03):
The delivery of the first production version, the C-130A, started in December 1956. This aircraft was equipped with four Allison T56-A-9 turboprops with Aeroproducts three-leaf propellers. Initially it was still wearing the blunt nose as on the prototypes, later they were fitted with a nose cone with a weather radar.
It soon became apparent that the device had one disadvantage, namely the limited range. This was solved by using external wing tanks.
A number of C-130As were adapted to provide skis. These devices were designated Lockheed C-130D Hercules.
Australia received twelve examples, making it the first user outside the US. The Australian C-130As had three-leaf Aeroproduct propellers with a diameter of 15 feet.
A total of 231 pieces were built.


Lockheed C-130B Hercules (Lockheed model 282)
This type appeared in 1959. With this type, the range was increased by the addition of extra tanks into the wings. Furthermore, the electrical system was changed to an AC power system. The three-leaf propellers were replaced by four-leaf Hamilton Standard propellers.
Furthermore, the ailerons were powered more strongly. The engines were also improved.

Thirteen pieces were later adapted for electronic exploration. These were designated by the USAF as C-130B-II. These aircraft were recognized by the larger wing tanks, which were actually disguised SIGINT (Singals Intelligence) antennas.
In addition, there was another blade antenna mounted on the back of the fuselage and, moreover, additional wire antennas between the vertical tail and the trunk back.
In October / November 1960, Canada obtained four C-130Bs as a C-130 Mk. I.
Lockheed C-130C Hercules
This was a planned STOL version with two additional YT56-A-6 jet versions of the Allison T-56.
This system was tested with the NC-130B (58-0712, c/n 3507). The project was discontinued and the device was transferred to the NASA JSC with Serial Number N929NA in 1961 for use as a pilot plane for border control.
Lockheed C-130E Hercules (Lockheed Model 382)
The C-130E is in fact a version of the C -130B with a larger range by the use of two external wing tanks and more powerful Allison T56-A-7A engines.
In addition, structural improvements and improved avionics were implemented.
The C-130E was destined for the USAF's MAC and TAC, which received the first examples in April 1962.
During the lifecycle of the devices, further adjustments have been made to extend the service life and improve usability, such as wing modification, SCNS (Self-Contained Navigation System) installation for better navigation and communication on especially lower Heigthn. Furthermore, the devices are equipped with a VOR / ILS (VHF OmniRange / Instrument Landing System) receivers and a modernized automatic pilot.

Lockheed C-130F Hercules.
The C-130F tanker was commissioned for the US Marine Corps, which designated it as GV-1. These tankers were fitted with an internal stainless steel fuel tank of 13626 l of contents transported in the cargo space.
Later, these devices were referred to as KC-130. A type adapted for Polar conditions was used as LC-130F
In addition, two hose-and-drogue tankpods were fitted under the wings, allowing two aircraft to refuel at the same time in the air at a tank speed of 19 l / min.
Due to the greater weight, further structural reinforcements were applied.
With KC-130F 149798, 1963 was tested with start and land on a fly-combat ship. The aircraft, which was lent by the Marine Air Corps to the US Naval Air Test Center, makes 29 touch-and-go landings, 21 landings (without hook) and 21 starts (without rocket or catapult assistance) each time with a different weight.
The tests were successful in itself, but the risks were thought to be too big to actually implemented.
Lockheed C-130G Hercules
A transport version of the Lockheed C-130E with structural reinforcements. Four examples were built for the US Navy between 1963 and 1964
Lockheed C-130H Hercules (Lockheed Model 382/C)
The C-130H was further enhanced and equipped with f our enhanced Allison T56-A-15 turboprops, including redesigned wings and improved avionics.
The latest series of C-130H received a wing mid section with improved lifespan. This was subsequently used on all aircraft already delivered.
The first deliveries of this type started in 1964 and the last ones were delivered in 1996.
In 1978, a version with improved avionics was introduced, designated by the USAF as C-130H2. The first version was from then on referred to as C-130H1.
Between 1992 and 1996, a further further improved variant was produced, designated by the USAF as C-130H3.
Improvements include ring laser gyros for the INUs, GPS receivers, a partial glass cockpit (with ADI and HSI instruments), an APN-241 radar (with color display), instrument lighting compatible with night vision equipment and an integrated radar and rocket Warning system. The electrical system was also upgraded with, among other things, Generator Control Units (GCU) and Bus Switching Units (BSU) to provide a stable power supply to the sensitive electronic components.
The Lockheed C-130H-30, originally referred to as C-130H (S) has a 15-foot extension.
In addition, a number of TC-130Es were upgraded while maintaining the original engines; These were designated C-130H-7.
Via the AMP (Avionics Modernization Program), the C-130E and C-130H devices are still in use and are equipped with digital cockpit instruments and flight instruments. Further, outdated Sperry weather radar is replaced by the Northrop Grumman AN / APN-241 radar As used in the C-130J.


Lockheed C-130J Hercules II
This latest version is equipped with more powerful Roll-Royce turboprops with six-bladed propellers. This gives the aircraft a significantly improved performance. Furthermore, the cockpit is modernized and equipped with HUDs and the avionics are further renewed.
Over time, various software updates and enhancements have been released for the device.
The Block 5.3 included, among other things, improved Navigation features, better displays, noise reduction and later improved radar approach and automatic formation flight.

Lockheed C-130K Hercules
An export version of the C-130H built for the RAF. This is referred to as Hercules C.1.
Later versions are the C.1K with possible refueling in the air; The Hercules C.1P with the ability to function as a tanker. The Hercules W.2 is a weather plane.
The Hercules C.3 is an extended version similar to the C-130H-30. Six of these devices have been upgraded to C.3A with self-defense systems such as AN / AAR-47 MWS, RWR, AN / ALE-40 chaff / flare dispensers and AN / AAQ-24 (V) Nemesis DIRCM.
Lockheed C-130R Hercules
The C-130R is a version for the US Navy and the US Marine Corps, both with fixed external fuel tanks under the wing and four Allison T-56-A-16 engines.
Lockheed C-130T Hercules
In fact, tan upgraded C-130R with upgraded avionics and night vision equipment.

In November 2004 two ex US Navy EC-130Qs were purchased. This EC-130Qs were stored since 1993 at DMI Aviation. These aircraft, used for electronic warfarewere completely overhauled and brought on C-130H standard. Furthermore the cockpit equipment was modernized and brought to the same level as the two C-130H-30 aircraft of the Netherlands Air Force. 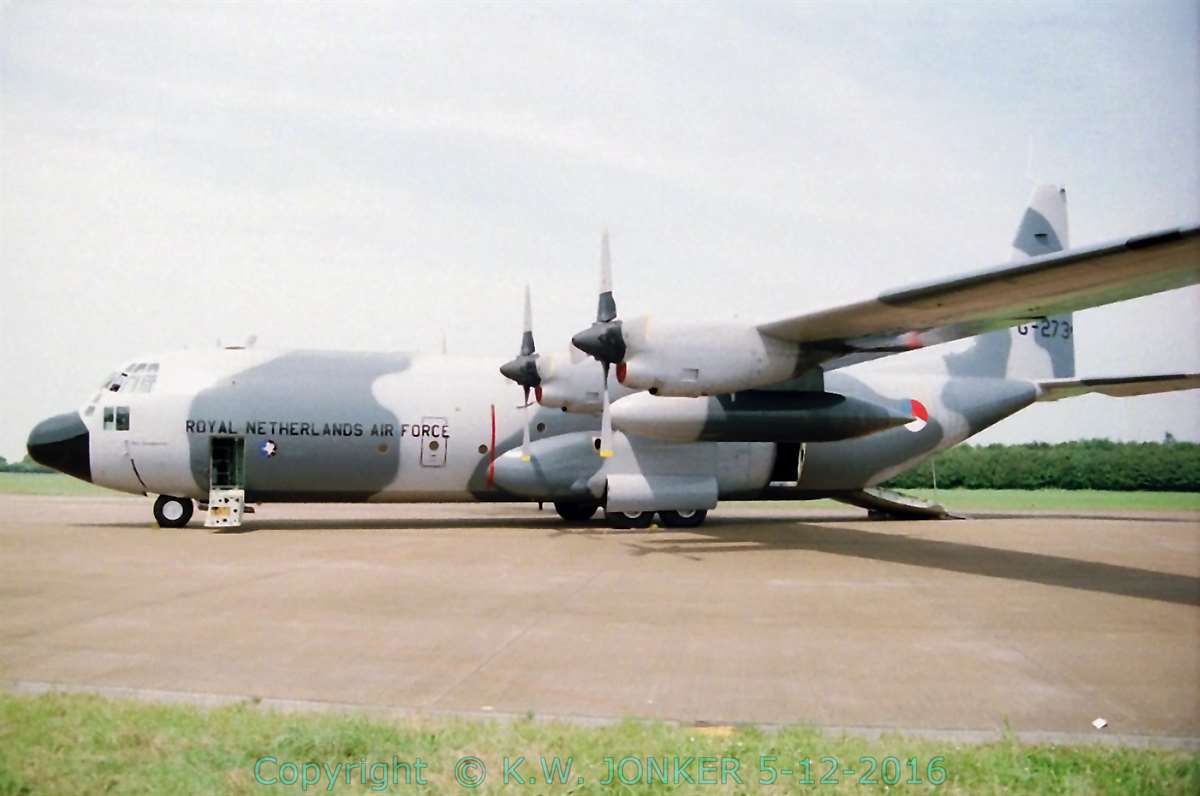 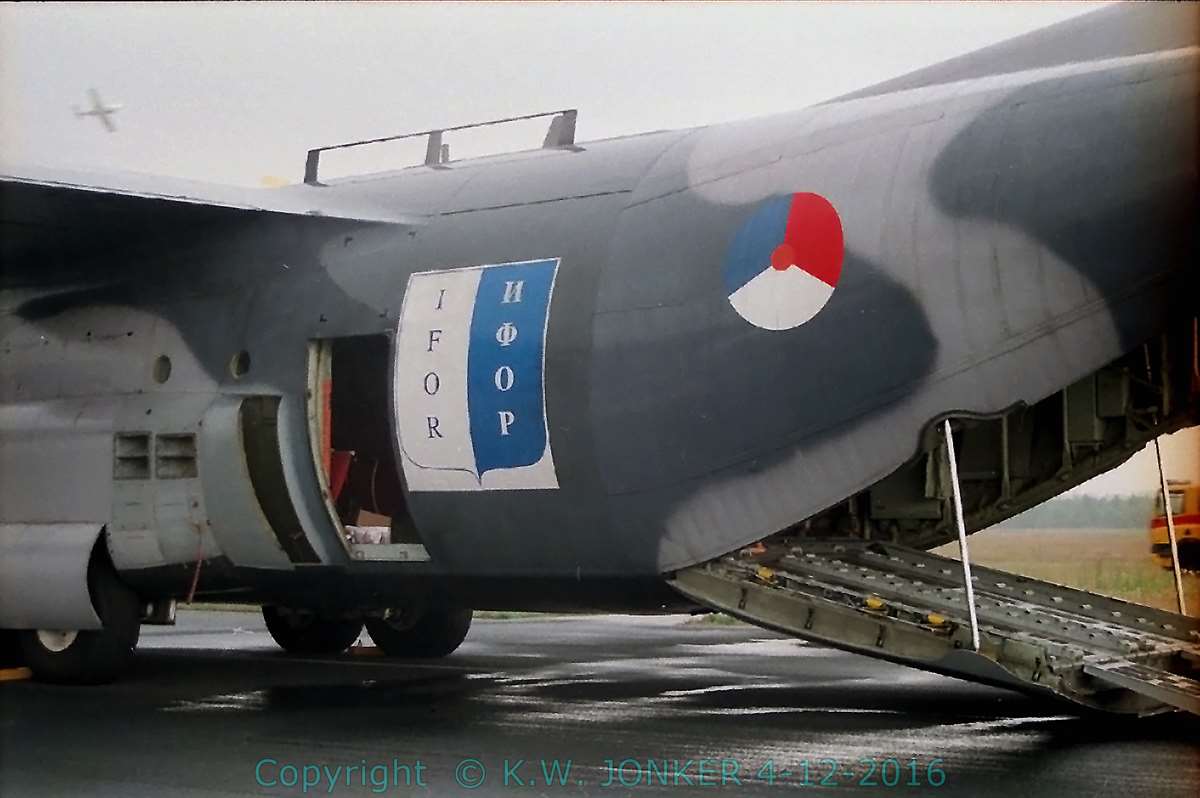 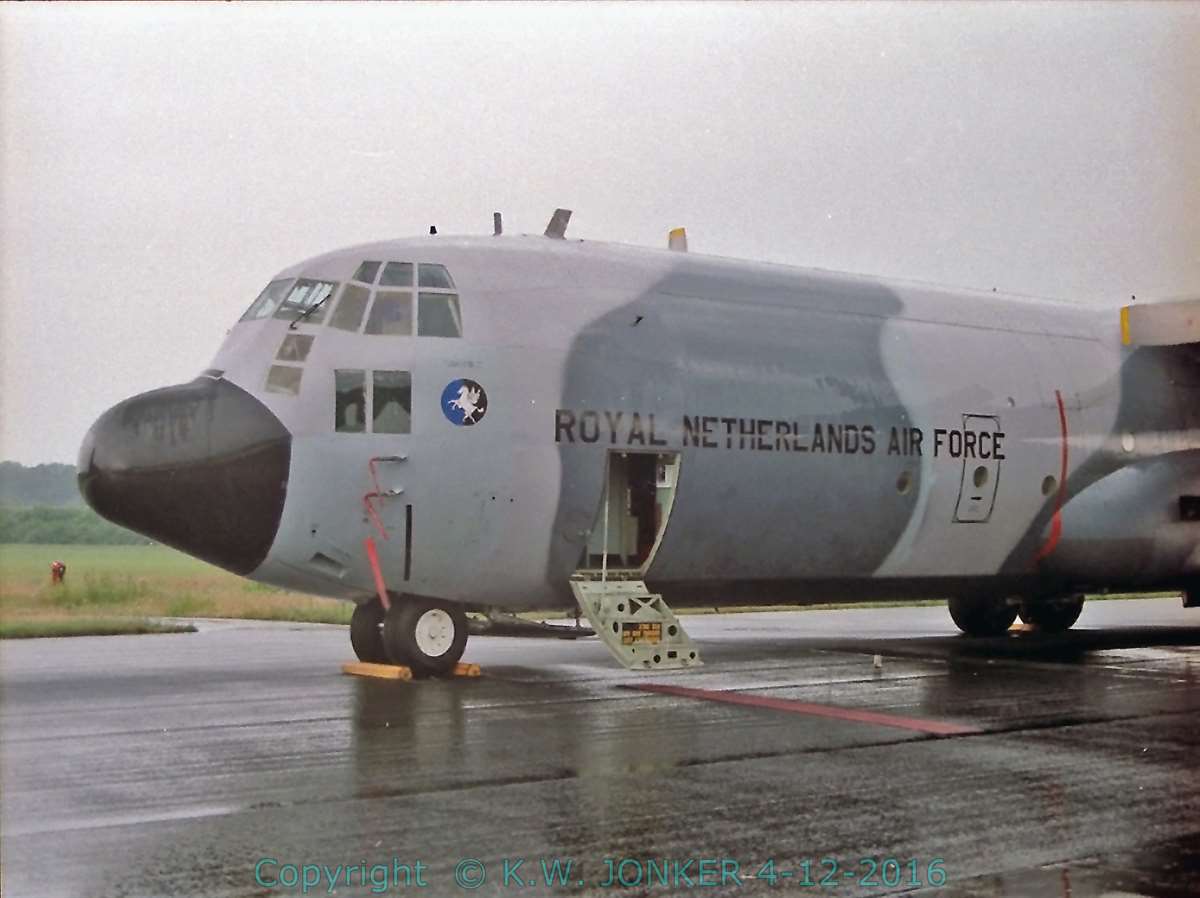 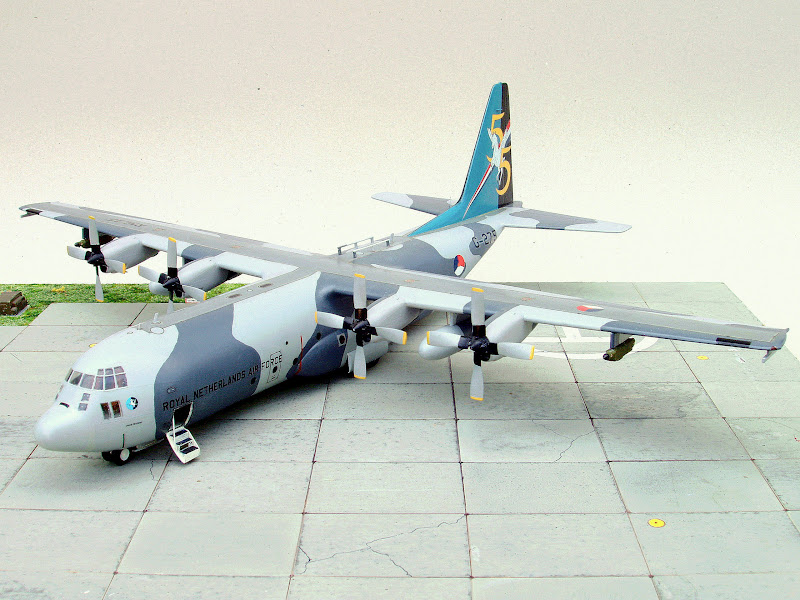 A model of a Lockheed C-130H-30 in 55th anniversary scheme, built by Adri Kleijn. 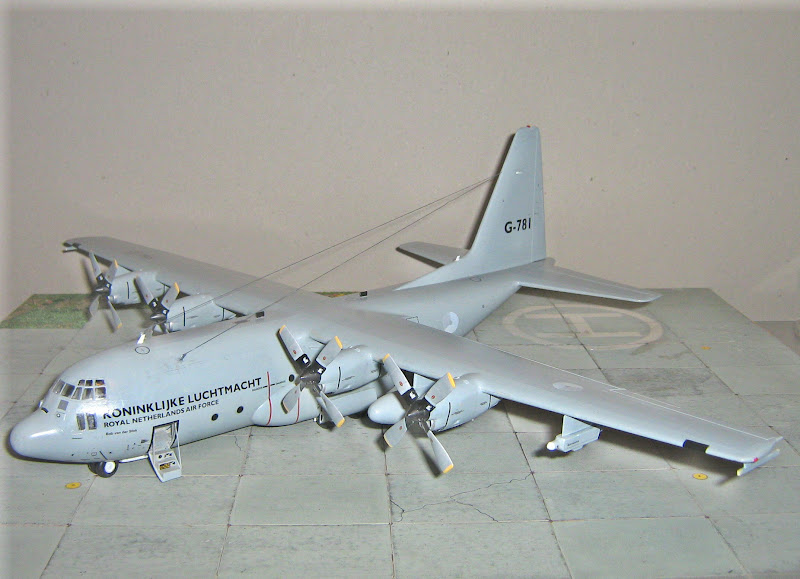 An model of a Lockheed C-130H, built by Adri Kleijn.

Lockheed C-130H-30 Hercules with grey nose and coating ont the undersides of the fuselage.

Lockheed C-130H-30 Hercules in current overall grey scheme with toned down nationality markings and squadron marking on the tail (not always applied).