Lockheed T-33 was developed from the Lockheed P-80 Shooting Star.
This aircraft made its maiden flight as early as 1944 and there were more than 1700 Shooting Stars were built.

Due to the large number of accidents at the beginning of the career of the P-80, the USAF decided to develop a trainer version, the TP-80C, which made its first flight in March 1948.
This prototype had originally also two additional tip tanks at the wing-tips, but because an internal fuel tank was removed because of the second seat, the flight range was very small. It was therefore decided to replace the two tip tanks with two fixed tanks of 230 gallons each.

In 1949, the type designation was changed to Lockheed T-33A, because of the large number of differences from the P-80.
Eventually more than 6500 aircraft built, including a version for the U.S. Navy, marked Lockheed TV-2, covering more than 950 pieces.

Furthermore, Kawasaki has 190 units built under license in Canada by Canadair and a further 656 examples with a Rolls Royce Nene of 2313 kg of thrust.


The Dutch Air Force received from different resources the T-33: from Belgium, eight aircraft for a period of several years were borrowed; eleven examples were taken from the USAF, and another five T-33s were taken from the U.S., but were been scrapped for spare parts and the bulk, 44 pieces were transferred under MDAP (Mutual Defence Assistance Program).
One of the RT-33A's, the M-103 came from the Turkish Air Force.

Initially the T-33A was used primarily as a training aircraft at 313 Squadron at Volkel and later they were used for the Transition training at Woensdrecht and Twenthe.

In September 1953 the 306 squadron at Volkel received its first aircraft, the F-84g Thunderjet. This new squadron was assigned reconnaissance, both visually and with photos.

November 1953 tests were taken with a K.20 camera in the left tip tank of an F-84E. These tests were successful, so in 1954 the F-84G was replaced by the F-84E with customized T-33 tip tanks.
In September 1954 306 squadron was stationed for a about two months at the German air base Bückeburg. At that time it had also become clear that the Thunderjet became obsolete.
306 squadron would be equipped with a real photo reconnaissance aircraft, the Republic RF-84F Thunderflash.
To prepare for this new aircraft,  in August 1955 the squadron received two Lockheed RT-1933 photo reconnaissance.
These were coded TP-19 and TP-20, as already some the Thunderflashes coded TP-1 to TP-18, were received.

The RT-33A had four cameras in the nose, three K18 and a K22 camera, which were a big improvement over the single K20 camera of the Thunderjet.

Basically the aviator had first a number of flight hours on the RT-33A to make before deciding to switch to the Thunder Flash.

After two years the squadron was fully switched to the RF-84F Thunderflash and the RT-33's were redundant.  Meanwhile, a third RT-33A was added to the inventory of the squadron.
The Thunderflashes were mainly used for operational photographs and the RT-33A mainly for external photo tasks, for example, pictures of ice or the delta works.

At the end of 1957, when 306 squadron was transferred to Deelen airbase, it was also decided that the squadron would perform only operational photography. It was at the end of 1958 when a separate photo section was raised for executing other photography tasks , the Base Photo Flight Deelen.

This unit consisted of a number of Piper Cubs, Harvards and three RT-33As.
Because the RT-33s were no longer assigned to an operational squadron, they receiver again their M-registrations on the nose.
The photo flight was under command of CTL. As at CTL all aircraft were camouflaged so the aircraft of th photo flight were also  camouflaged. In 1968, the Photo flight was abolished.  The cameras of RT33 were much earlier, namely in 1963 removed  and mainly used as trainers at TVO at air base Woensdrecht.
During the sixties, the camouflage was removed and the RT-33s were sprayed overall aluminium dope .

TP-19 (M-101) had made an emergency landing on January 24, 1959  on the Hoge Veluwe. The aircraft was easy to repair, but is scrapped because of the  lack of spare at that time. 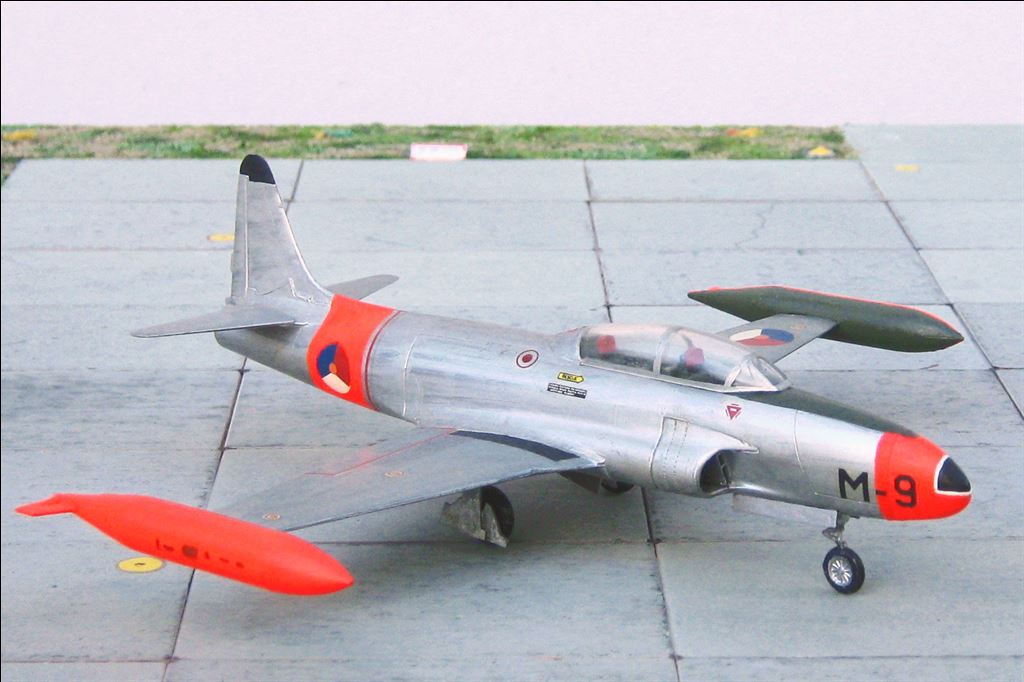 A model of a Lockheed T-33A, built by Adri Kleijn. 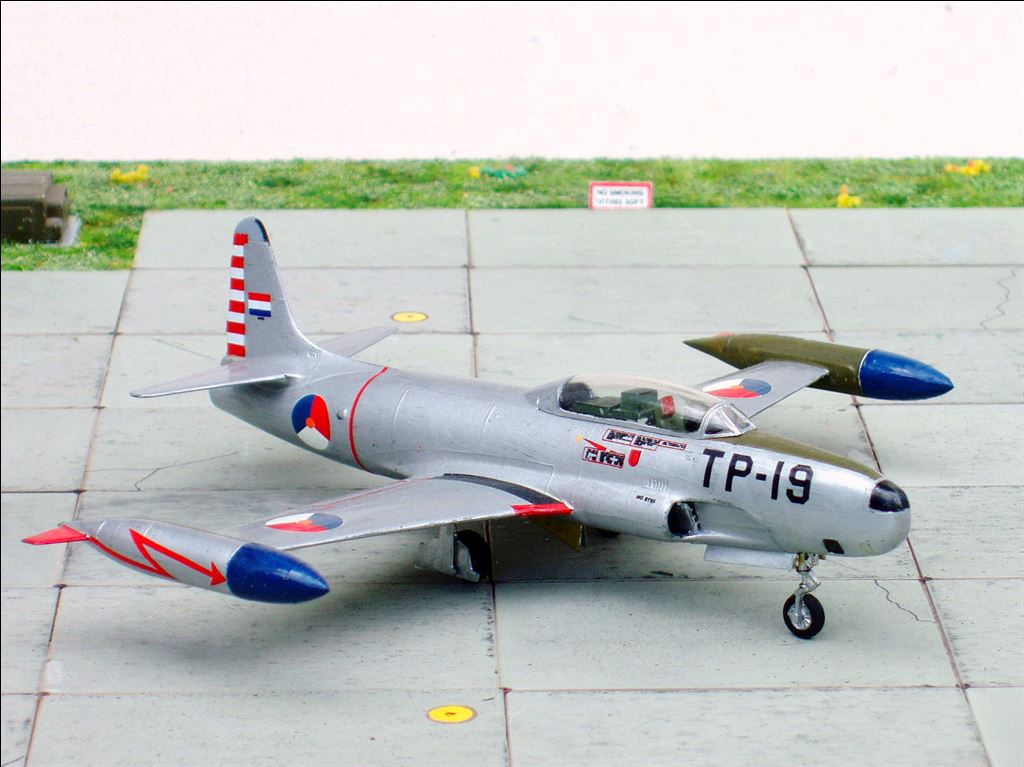 A model of a Lockheed RT-33A, built by Adri Kleijn.

A model of a Lockheed T-33A, built by Adri Kleijn. 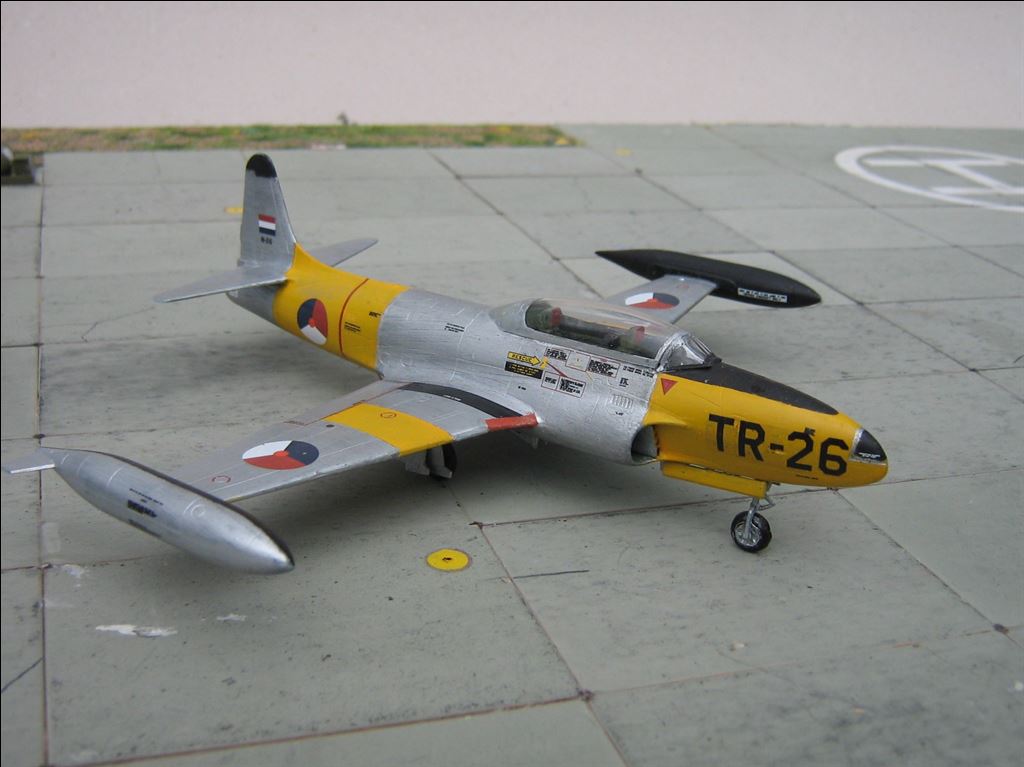 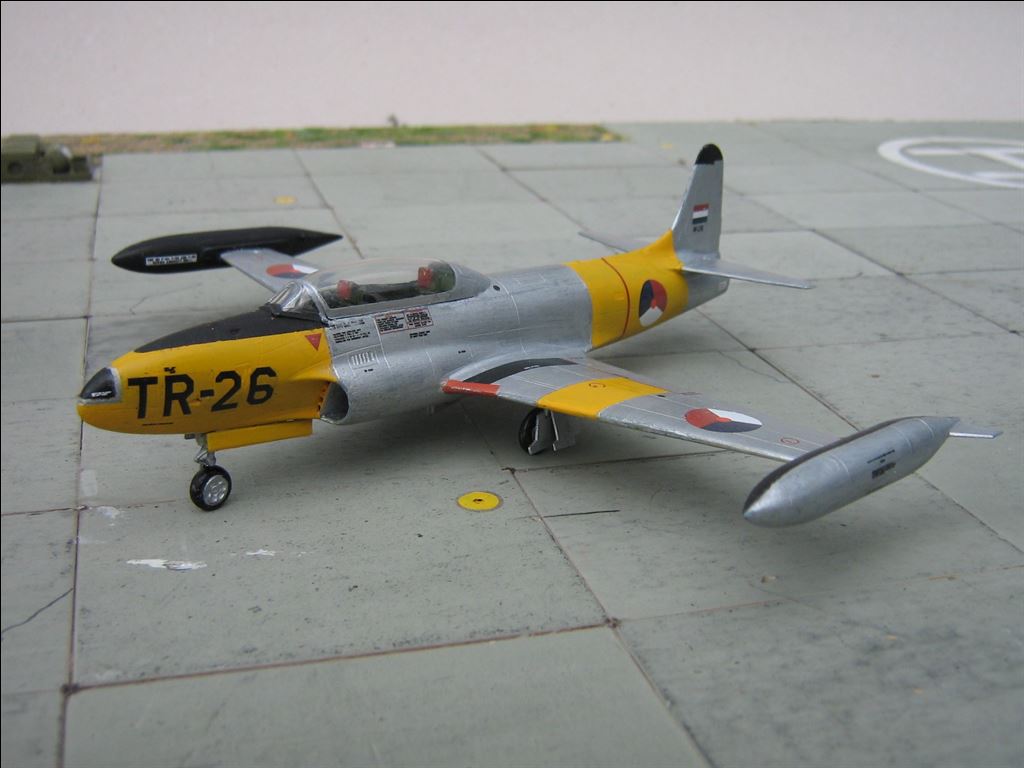 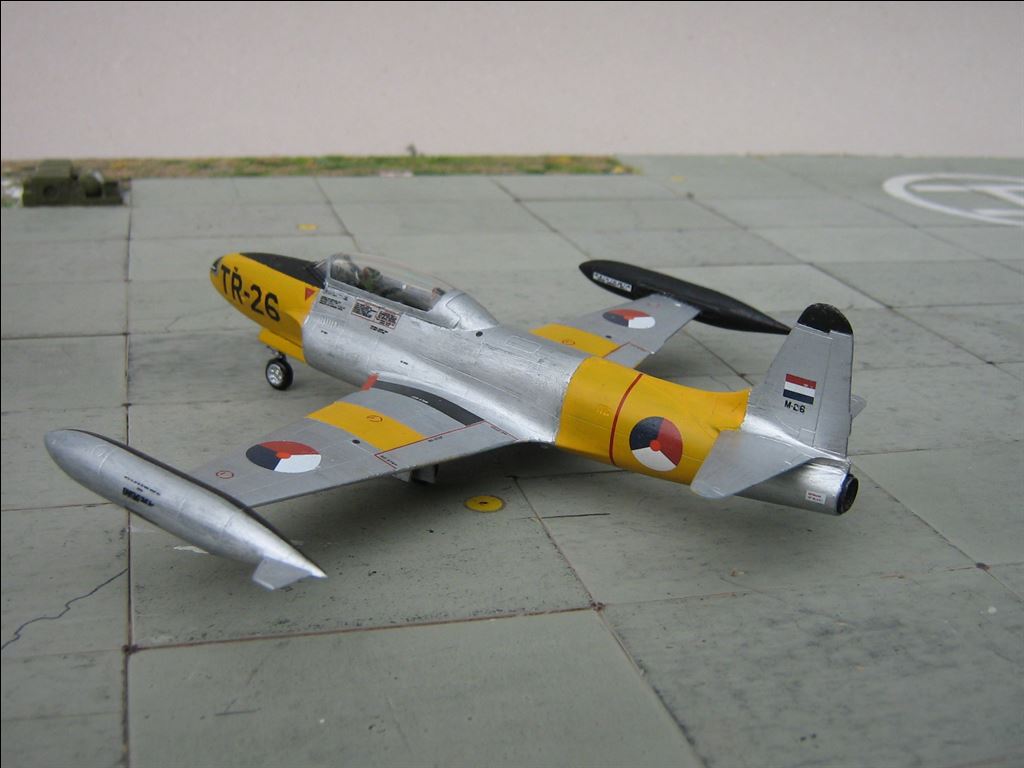 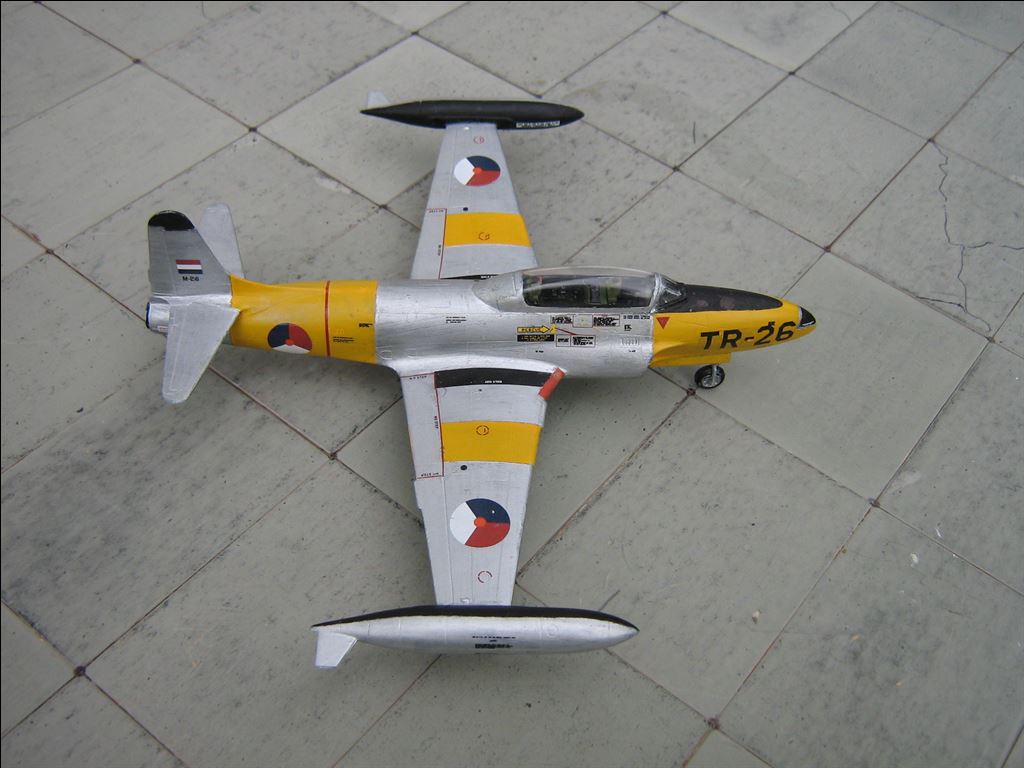 Two models of a Lockheed RT-33, built by Peter Banis. 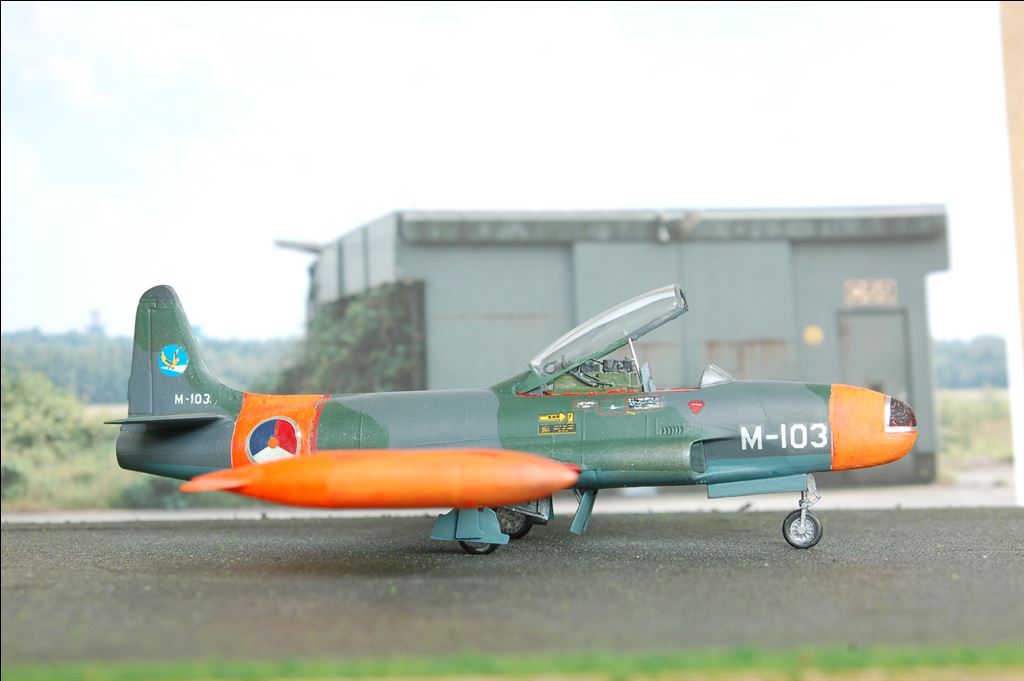 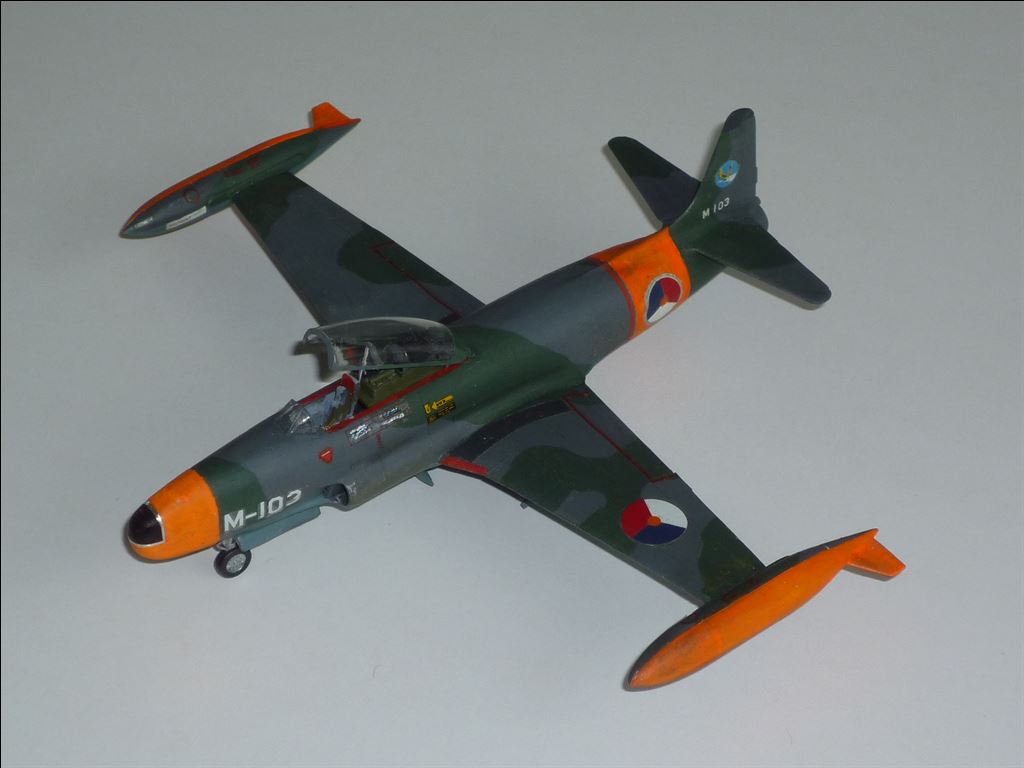 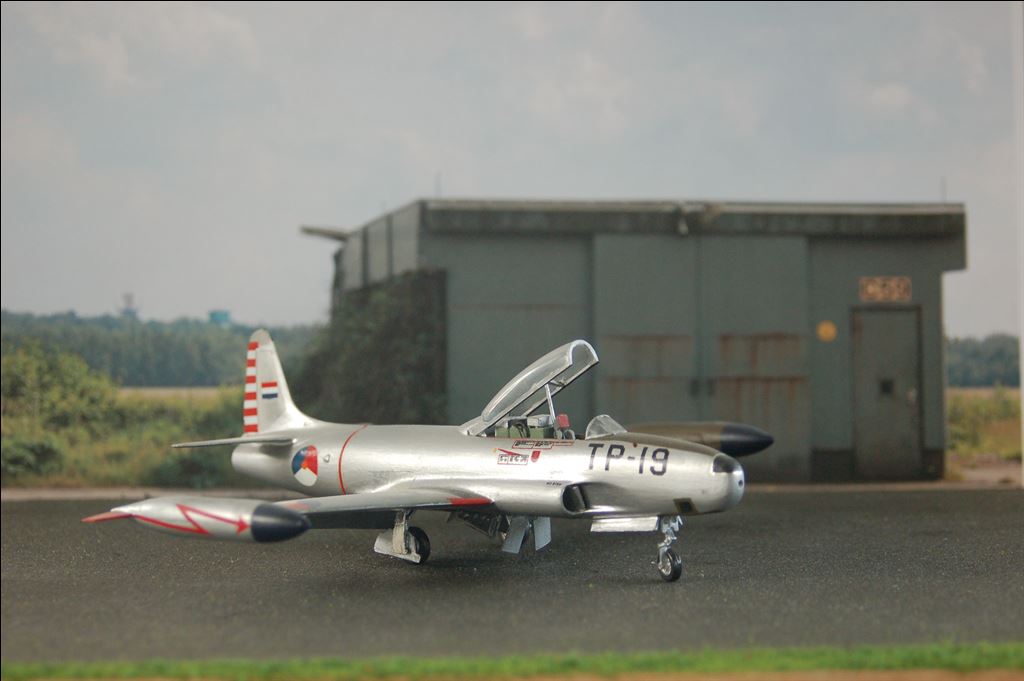 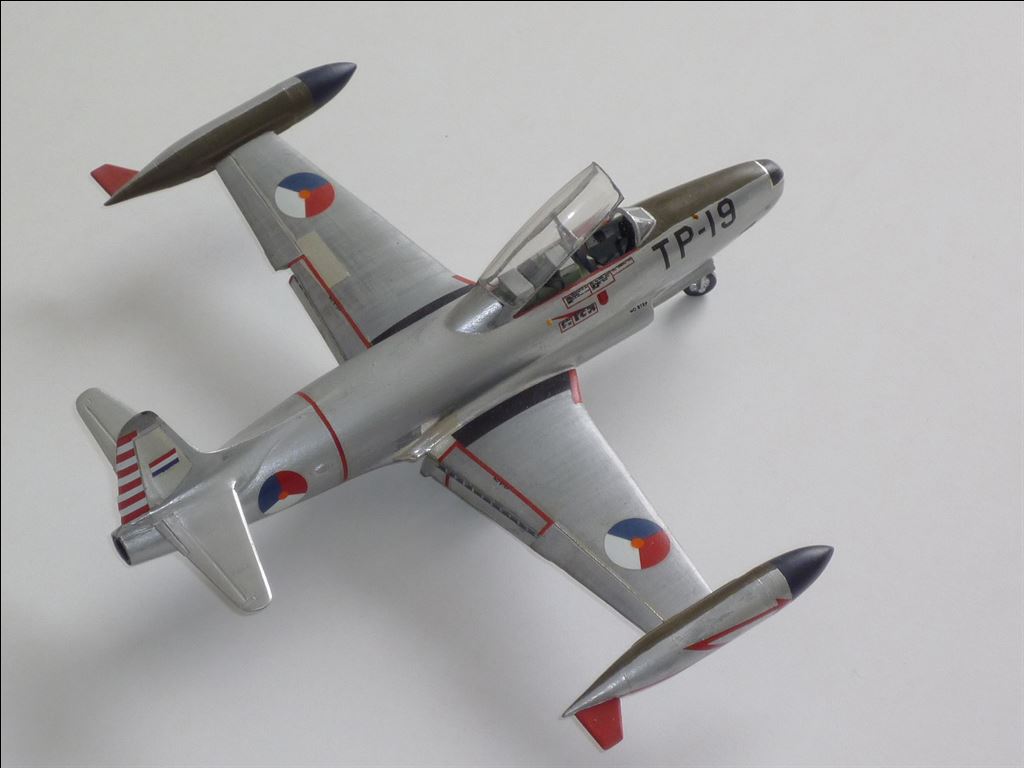 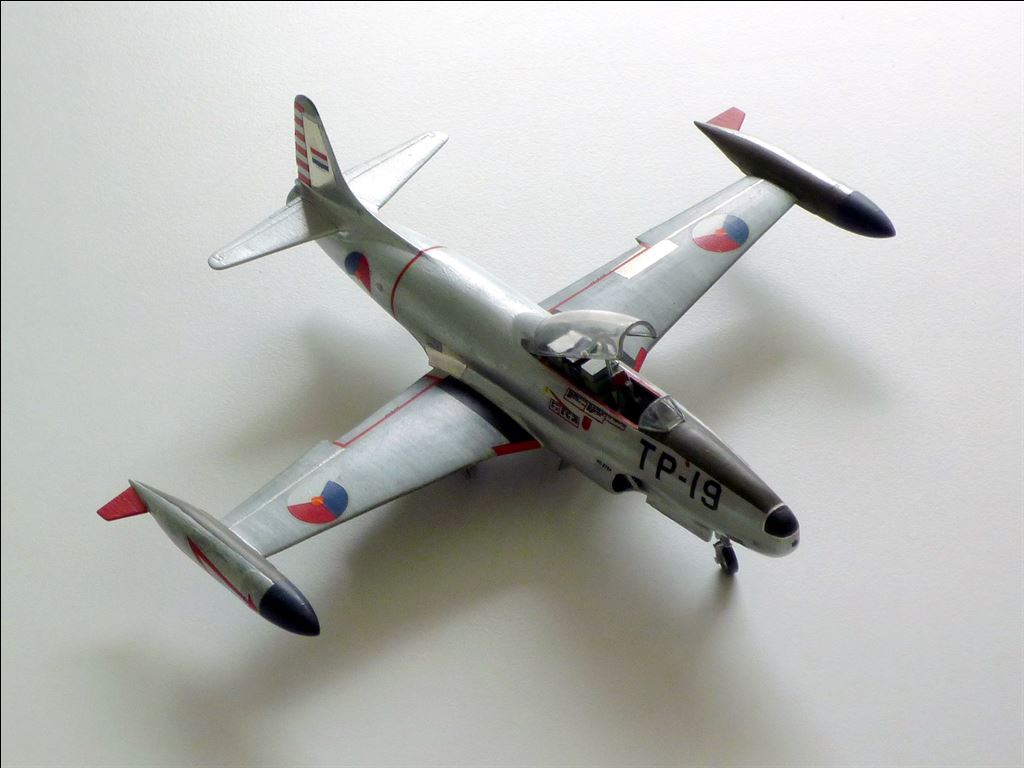 Camouflage scheme Lockheed RT-33A; The pattern of this scheme is unknown.

The pattern and colours shown here are derived from the pattern used for the Republic F-84F Thunderstreak. This pattern is most probably used in the RT-33.
More information about this scheme is welcome!

Special thanks to mr H. Groeneveld and mr. P. Sturm for providing me with lots of information about the markings of the Lockheed T.33