A larger version of the Bo103 was initially designated as Bo104, but this was soon followed by the Bo105.

The prototype of the Bo105 was equipped with two Allison T-63 turbine engines and a conventional rotor system. However, this helicopter experienced such resonance that it was destroyed.
The second prototype first flew in February 1967 and had a four-bladed rotor with solid fiberglass reinforced blades, which were later also applied to the production version.
The third prototype was equipped with two MAN turbine engines of 375 horsepower and first flew on December 20, 1967.

In mid-October 1970 received the Bo105 its type-certification of the German aviation authorities.
In April 1972 was also the FAA (Federal Aviation Administration) certification is obtained, so the type could also be exported to the USA.

The Bo105C was developed in 1972 and chosen by the German Ministry of Defence as a light observation helicopter. In 1977 100 examples were purchased while 112 examples of a special anti-tank version, designated as Bo105 PAH-1, equipped with Euro Missile HOT missiles, were purchased for the German army.

The Bo105CB with two powerful 250-C20B turbine engines Alison, was developed in 1976.
This type was extended by approximately 25 cm in response to American demand and released as Bo105CBS. [in the United States known as B0105 Twin jet]
A version of the Bo105CBS the B0-105LS, equipped with more powerful Allison 250-C28C had a higher take-off weight and appeared in 1984.

Production ended in 2001 after more than 1400 examples had been built.

The aircraft were delivered between 1976 and 1979 and assigned to the Group Light aircraft (GPLV). 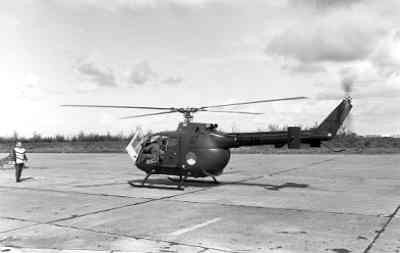 Bo-105 serial ready for take-off.
[Enclosed photo from BeeldBank NIMH. Click on photo for ordering information].
This photo is taken shortly after delivery because of the white interiro (of the door) 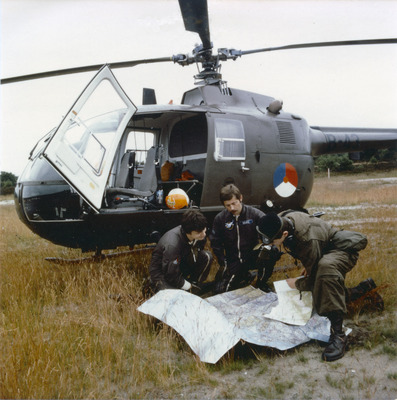 A Bo-105C during a army manoevre.
[Enclosed photo from BeeldBank NIMH. Click on photo for ordering information] 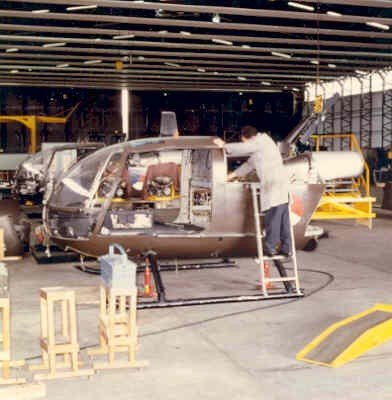 A Bo-105C under maintenance.
[Enclosed photo from BeeldBank NIMH. Click on photo for ordering information] 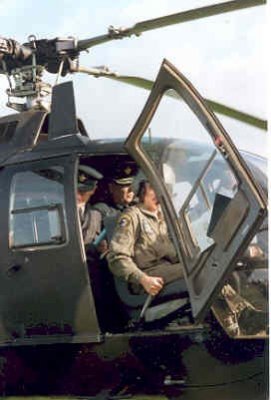 Detail of a Bo-105.
[Enclosed photo from BeeldBank NIMH. Click on photo for ordering information]

Initially, they were divided among the three GPLV squadrons (which already had the Alouette III in their inventory), but this proved logistically a problem and they were all transferred to 299 Squadron at the Deelen Airbase. 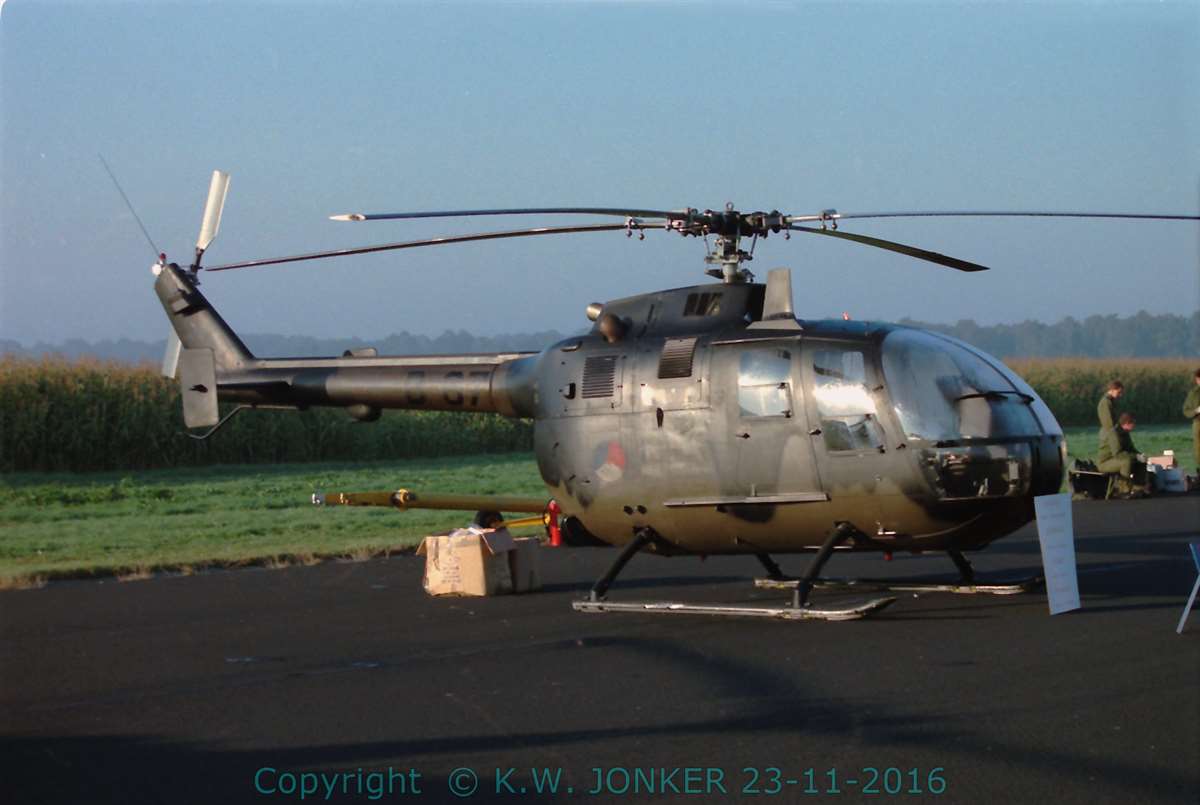 Bolkow B-105CB B-37 photgraphed during an Open Day Dutch Air Force, June 1986 at air base Eindhoven. 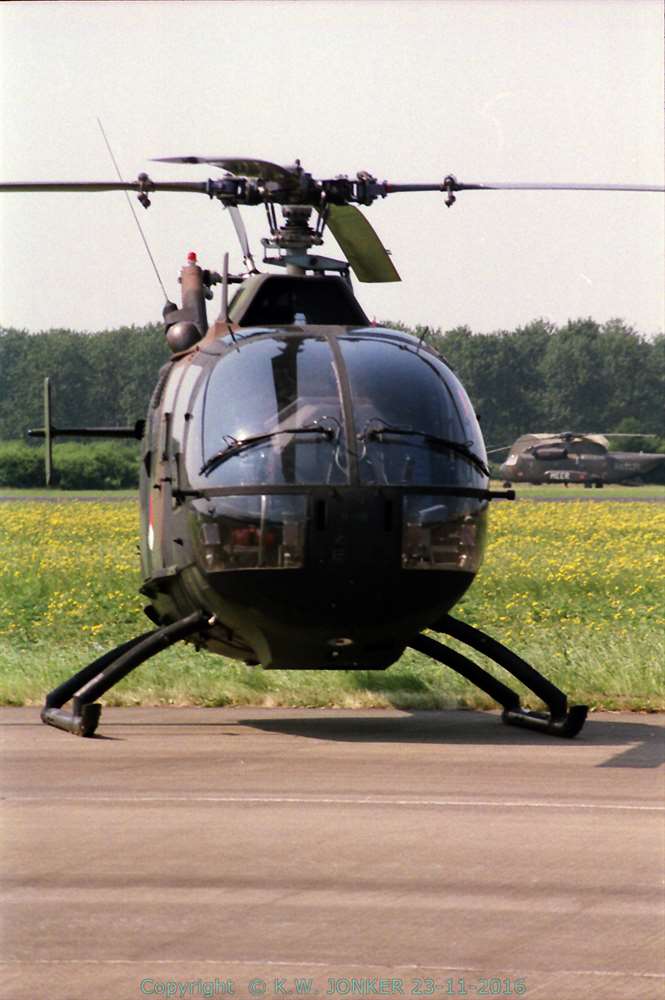 Bolkow B-105CB B-48,photographed at the static show during the Open Day Dutch Air Force, July 1986 at air base Volkel.

The Bo-105CB was used as an observation helicopter for the Dutch army and was (later) also equipped with night vision equipment. Also, passenger, liaison and medical transport belonged to the tasks.

During their operational period at the Dutch defence the Bo-105C were modernized several times. Between 1987 and 1989 the Bo-105s were thoroughly modified and equipped with night vision devices (night vision goggles) and also a Dopplers navigation system, so they could by used for operations during the night.
Also the cockpitlights were improved, a TACAN navigation set, UHF/VHF radio equipment and "HeliPilot"stilization system was added. 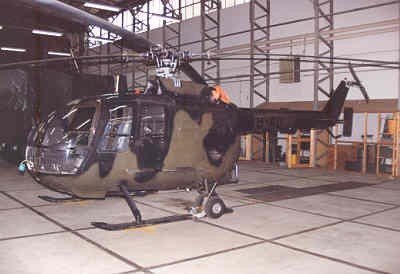 Bo-105CB B-40 in a hangaar.
[Enclosed photo from BeeldBank NIMH. Click on photo for ordering information] 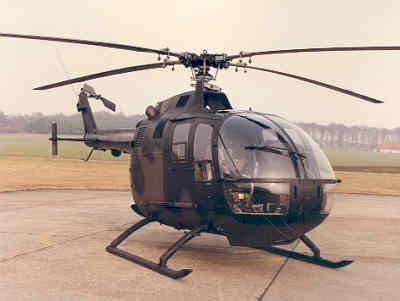 Bo-105CB B-80.
[Enclosed photo from BeeldBank NIMH. Click on photo for ordering information]

299 squadron flew very often with the Bo-105C duing Open Days Dutch Air Force. Usually it was a standard aircraft, but sometimes the Bo-105 had a special paint scheme applied.

Because of 75 years RNlAF a Bo-105C had a red, white and blue flag on the vertical tail appplied en flew a display at the Open Day at Air Base Deelen. 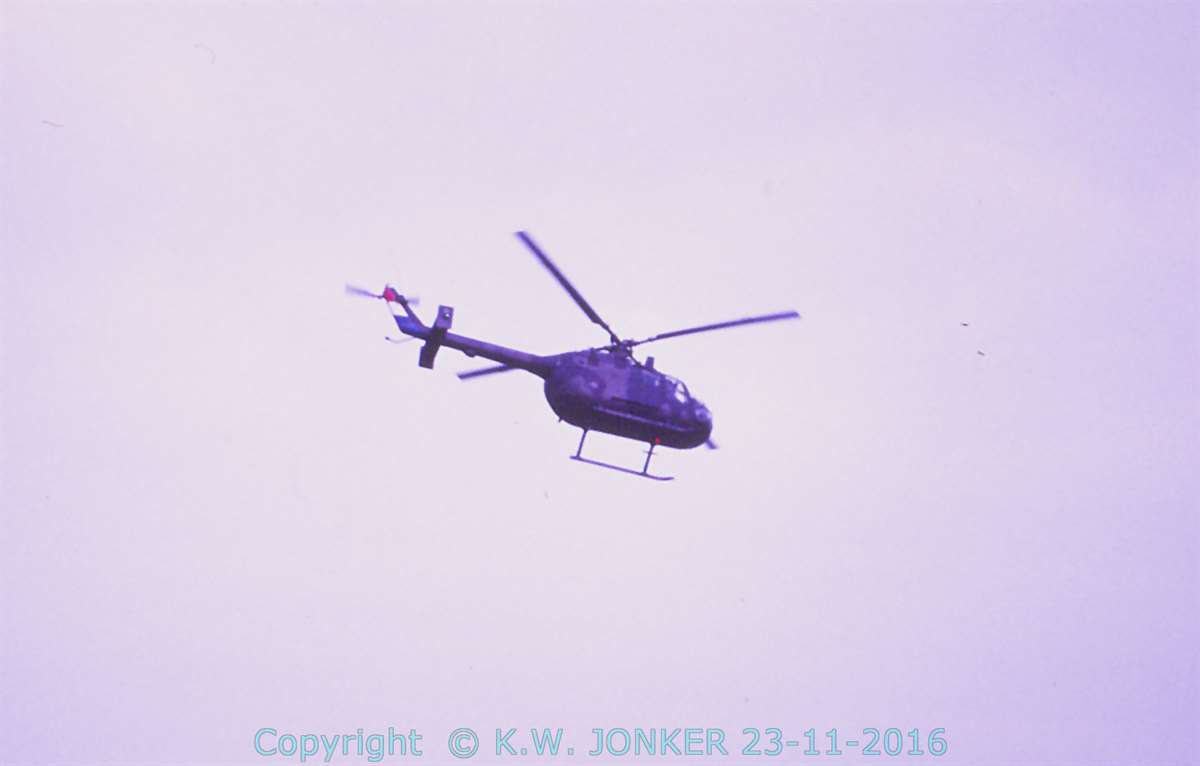 In 1990 two aircraft flew displays, they had an attractive schema appplied, white an blue scheme. 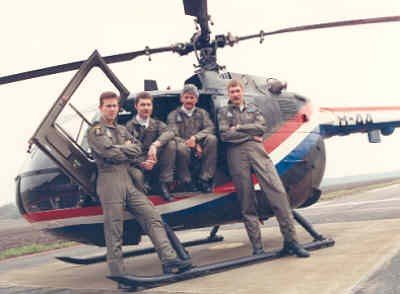 The Bo-105 display team in front of Bo-105CB B-44.
[Enclosed photo from BeeldBank NIMH. Click on photo for ordering information] 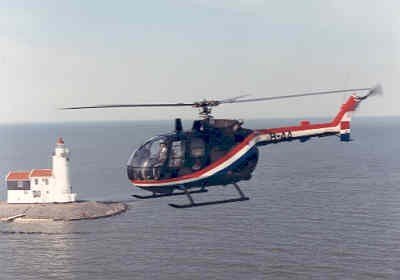 At the Open Day Duthc Air Force at Air Base Volkel a very nice Bo-105CB , B-77 was show. the fuselage was overall aluminum dope with a grasshopper cartoon, while the tail was red, white an blue.
This was because of 25 years Dutch Military service of the Bo-105CB.
The aircraft kept this paint scheme en was soon withdrawn from use en used for instructional purposes at air base Gilze Rijen. 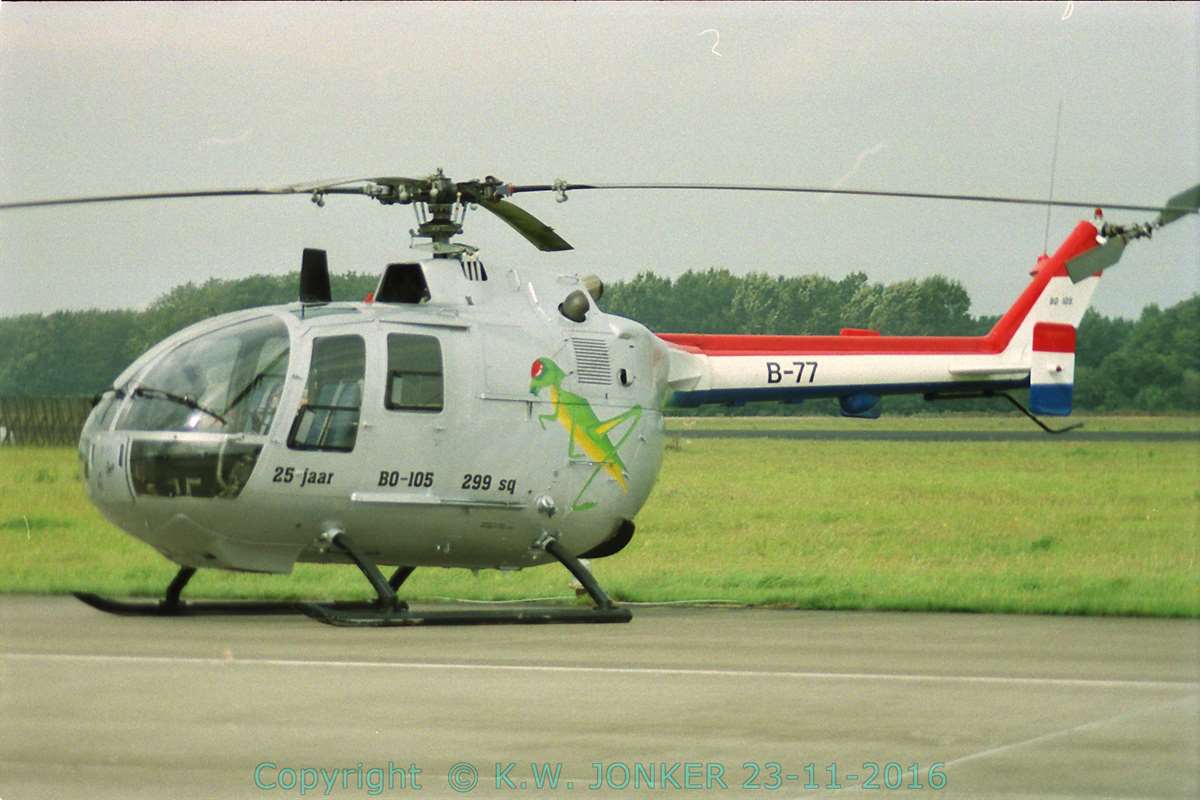 Bolkow B-105CB B-77 photographed at the static show during the Open Day Dutch Air Force, September, 2000 at air base Volkel.

Prior to being send to their new operational area, the aircraft were equipped with Global Positioning System (GPS) and bulletproof kevlar armour and later also with a flare system. These modified Bo-105s were designated by the RNlAF as Bo-105Cb-4

Early 1994, four aircraft were seconded in the Balkans as support of the Dutchbat I: the Dutch UN soldiers in Lucavac and into the safe havens of Srebrenica and Zepa. 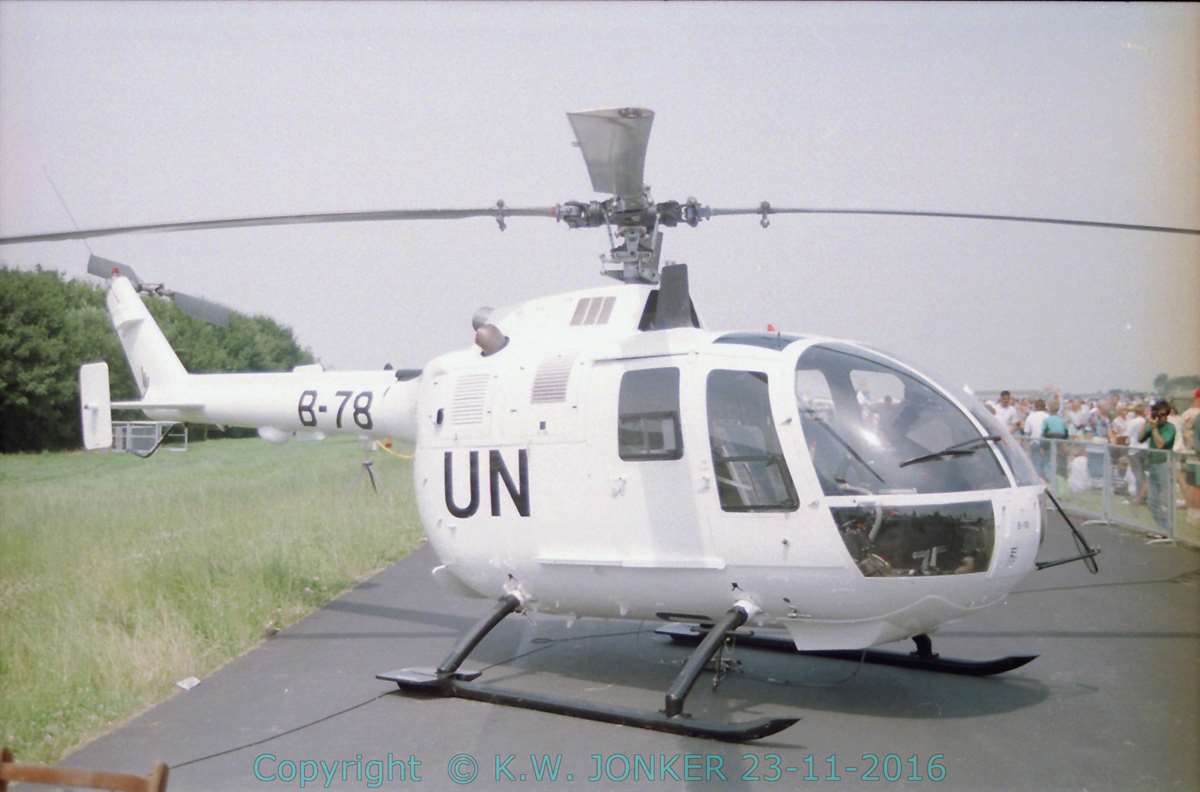 Bolkow B-105CB-4 B-78 photographed at the static show during the Open Days Duthc Air Force, July 1994 at airbase Leeuwarden. 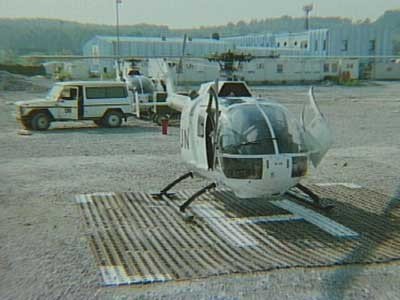 UNPROFOR units with a Bo-105CB in Bosnië-Herzegowina.
[Enclosed photo from BeeldBank NIMH. Click on photo for ordering information] 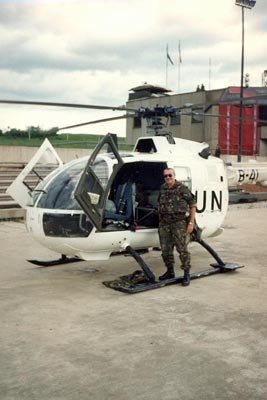 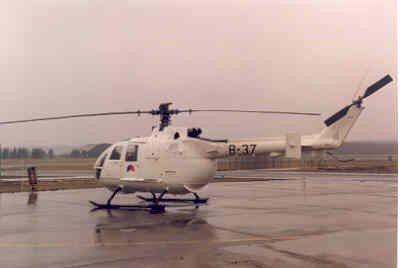 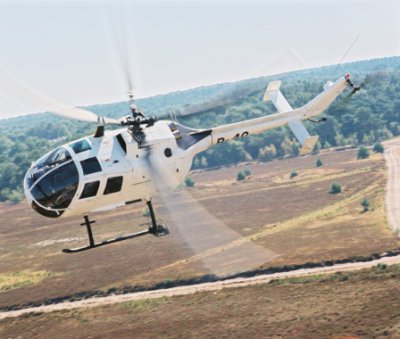 December 1995 the Dayton Agreements were signed and meant an end tot the hostilities in Bosnia-Herzegowina.
To achieve the peace proces, the UN raised an implentation force: IFOR, which was after about a year replaces with the smaller SFOR (Stabilization Force) 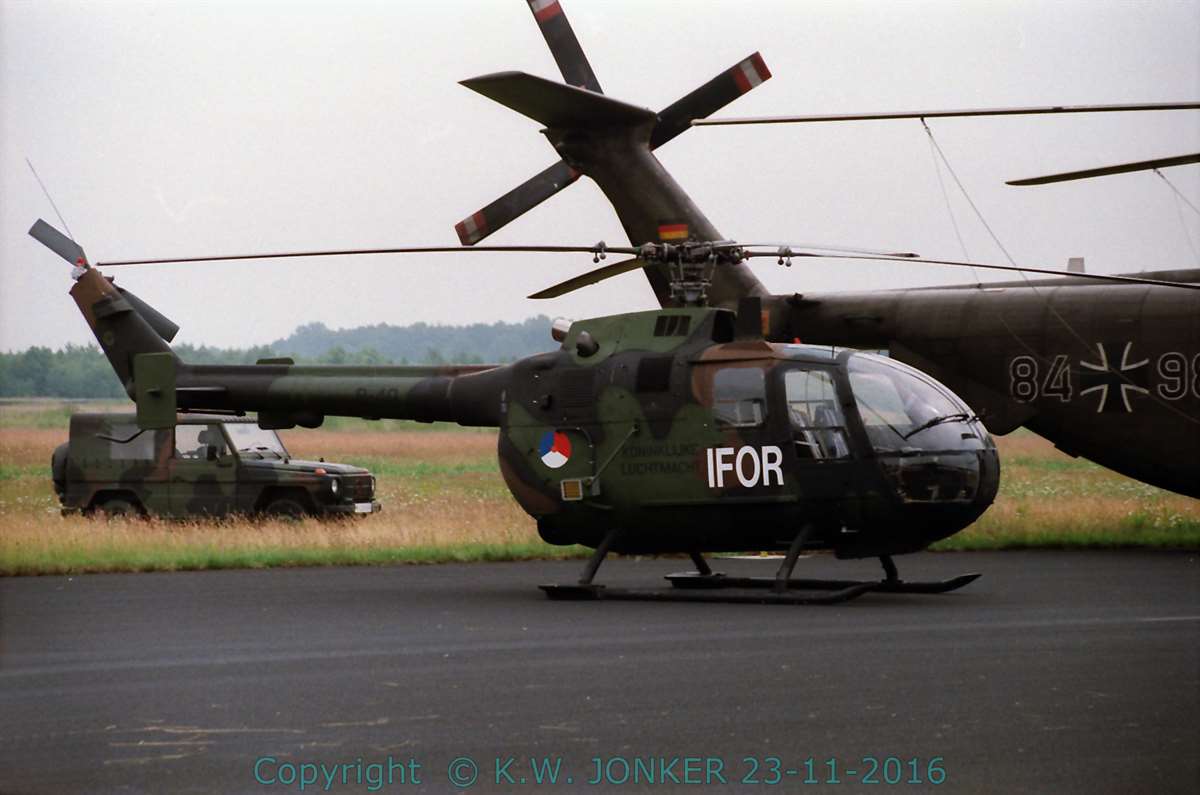 Bolkow B-105CB B-49?, with IFOR markings, photographed at the static show during the Open Day Dutch Air Force, July 1996 at air base Twenthe. 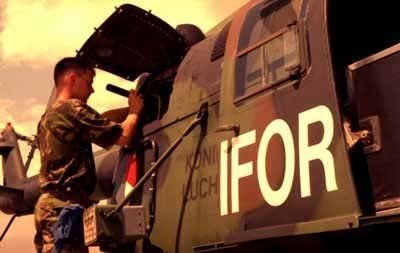 A Bölkow Bo105CB helicopter of the RNlAF is being prepared for a job serving the IFOR Implementation Force in the former Yugoslavia.
[Enclosed photo from BeeldBank NIMH. Click on photo for ordering information]

In 1999, four aircraft were sent out again. This time they were sent to Farke in Albania in addition to the already present  Chinooks of 298 squadron, which were there as part of the UN mission KFOR, the international force in Kosovo.
In November 1999 they were transferred to a new home base at the site Toplicane.

This base was built and used along with the German Bundeswehr. 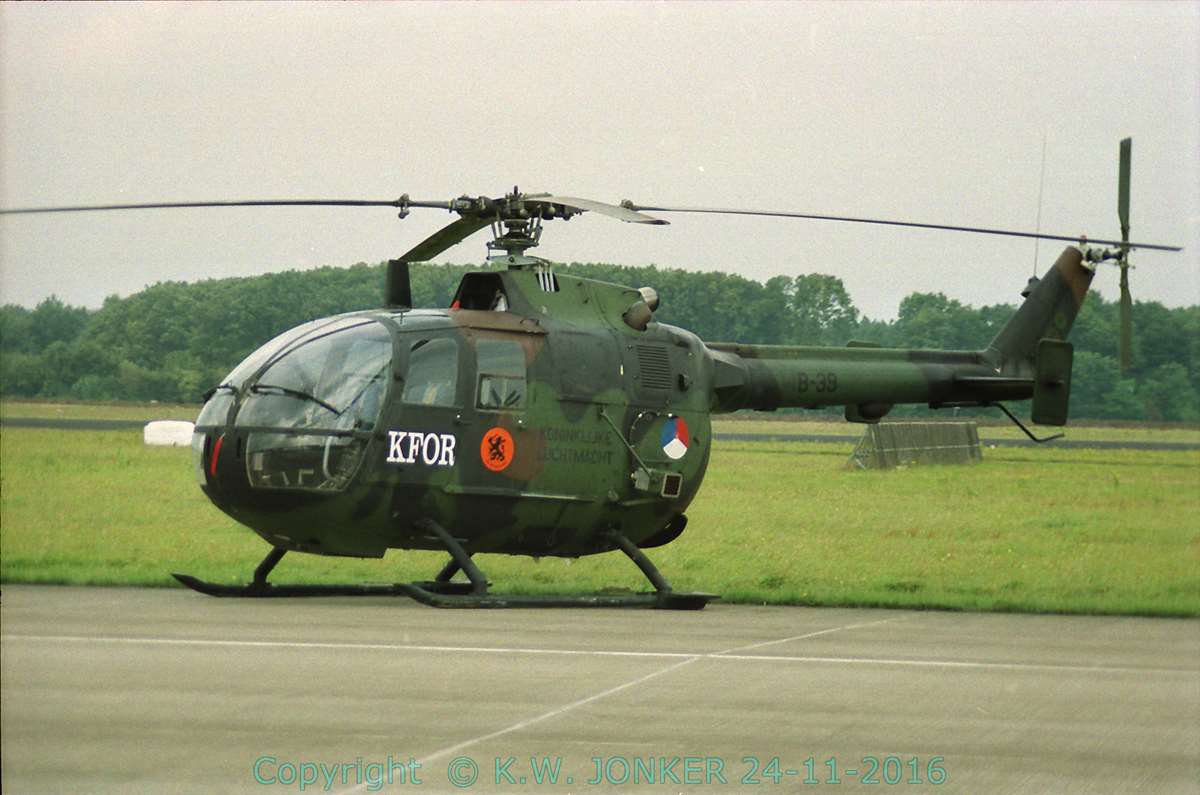 Bolkow B-105CB B-39, with KFOR markings, photographed at the static show during the Open Day Dutch Air Force, September 2000 at air base Volkel. 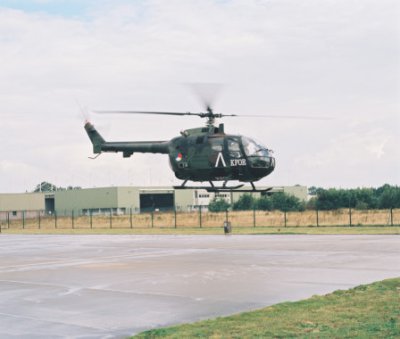 On December 3, 1999 near the border of Kosovo and Albania one of the BO's, serial B-37 flew against a number of high voltage cables while performing a mission.

In the course of 1999 the Bo105CB was withdrawn from use and replaced by the Eurocopter Cougar.
The last aircraft were taken out of service in late 2003. 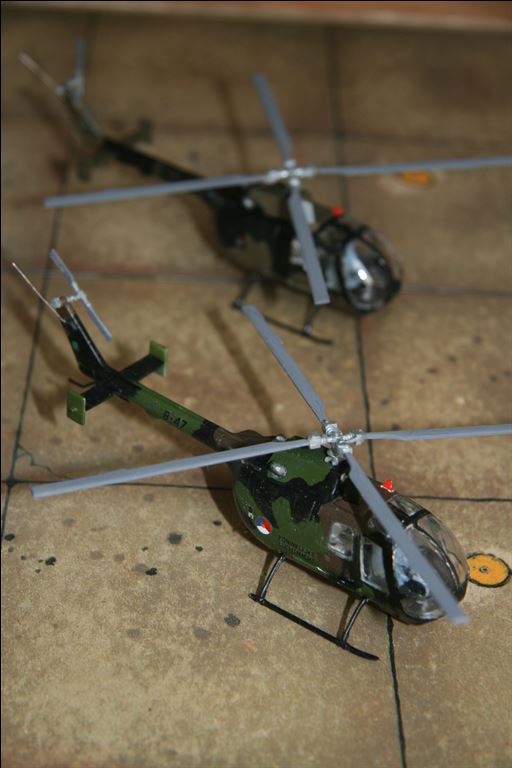 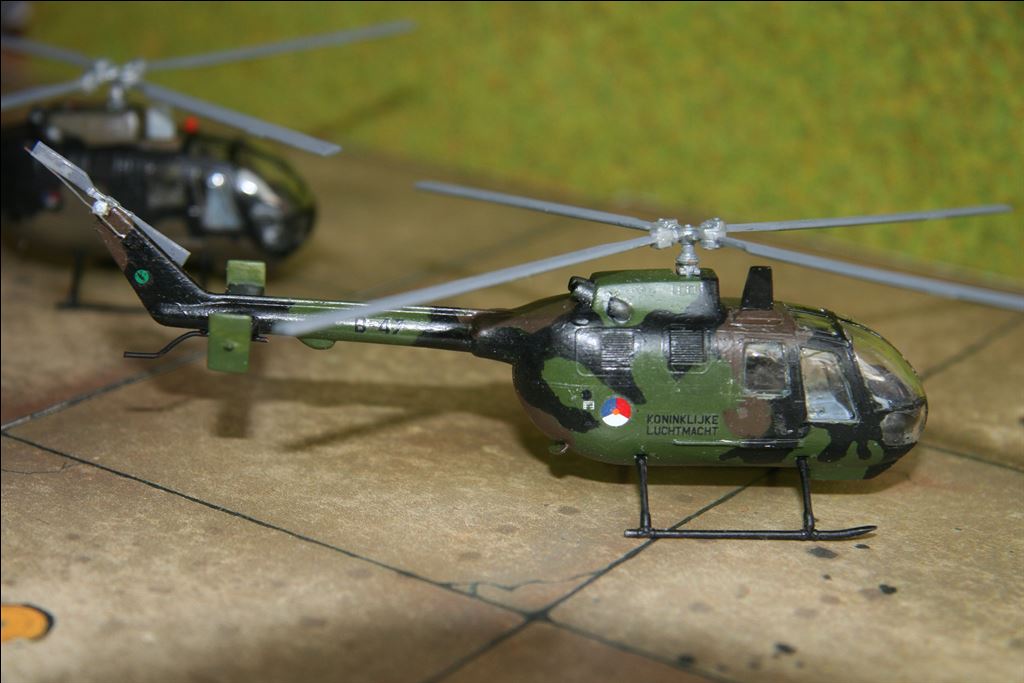 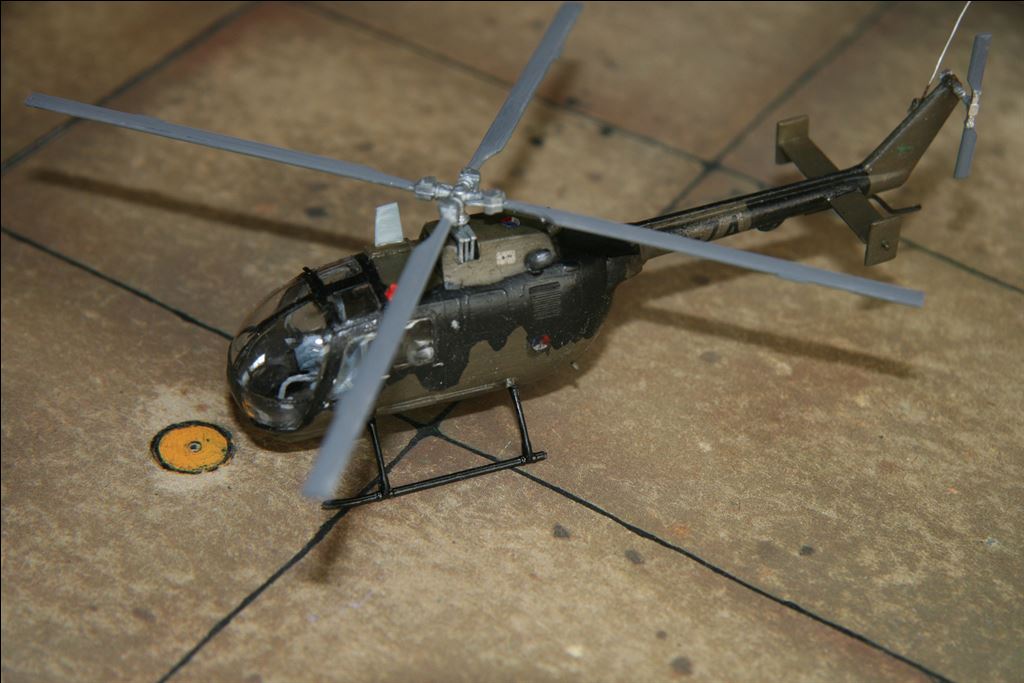 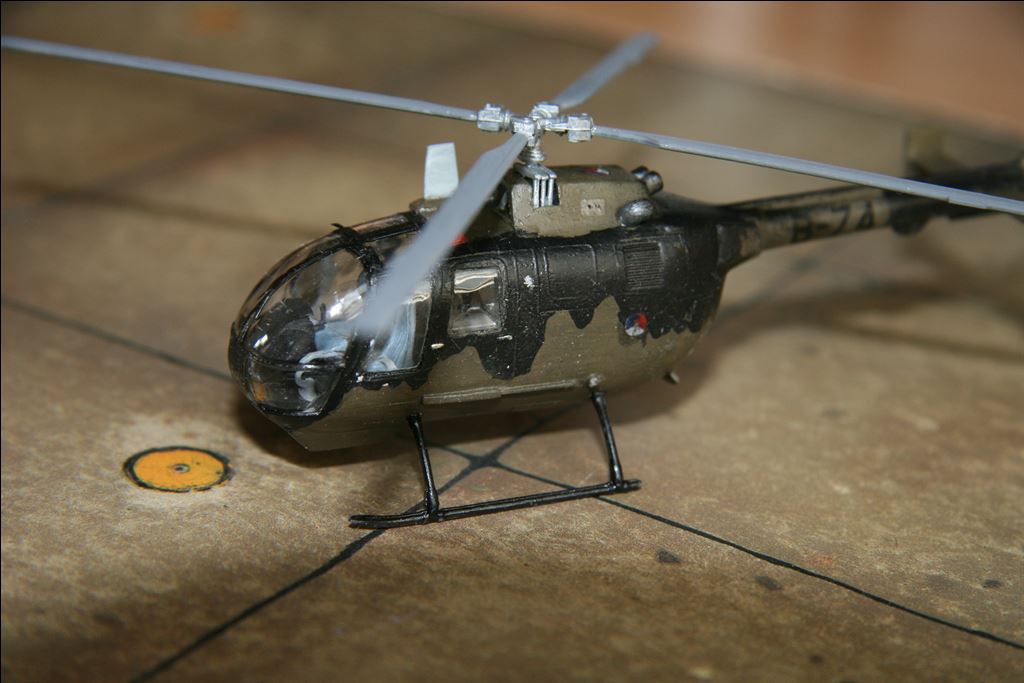 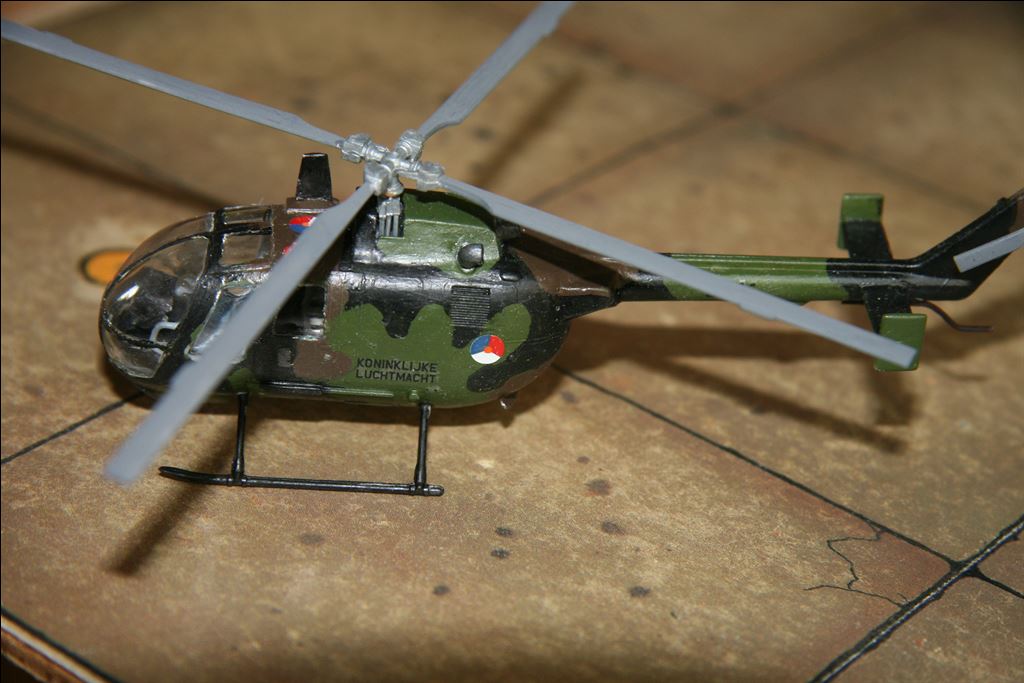 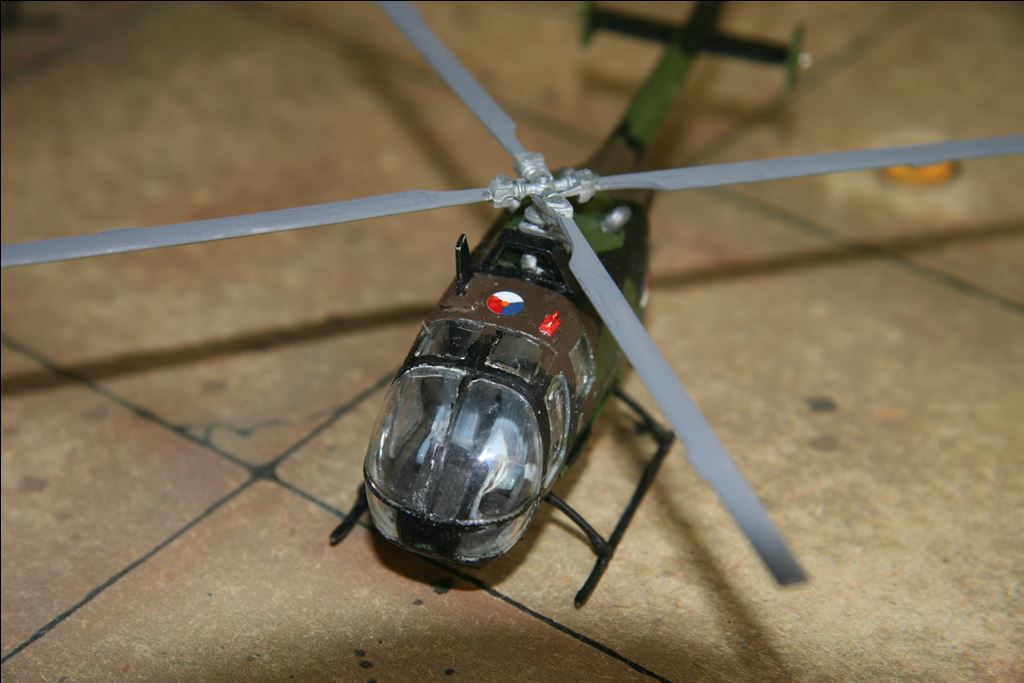 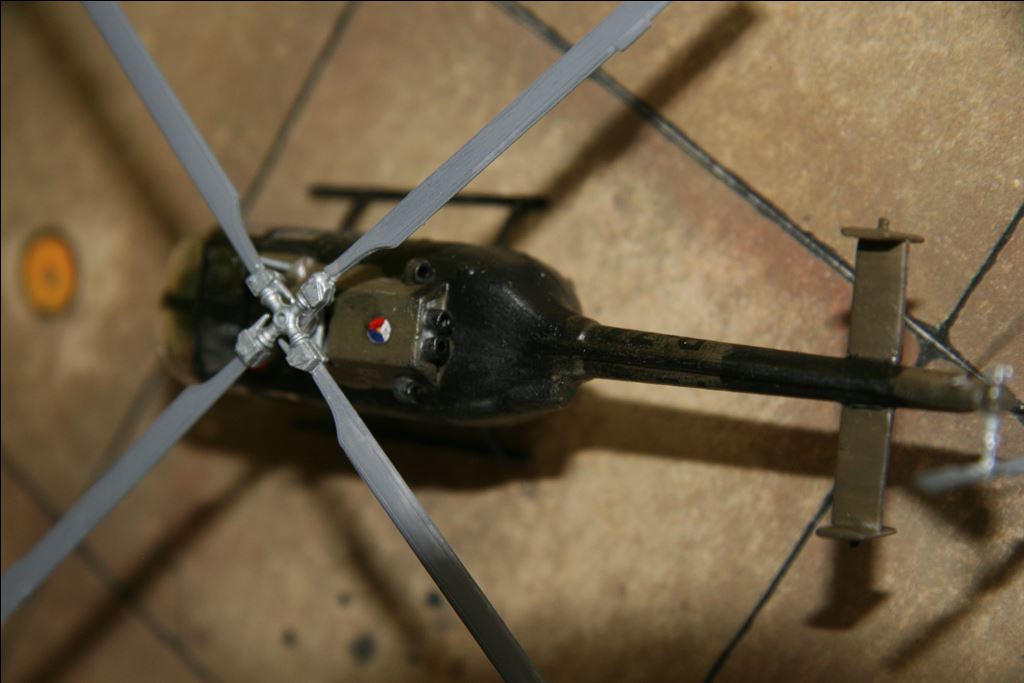 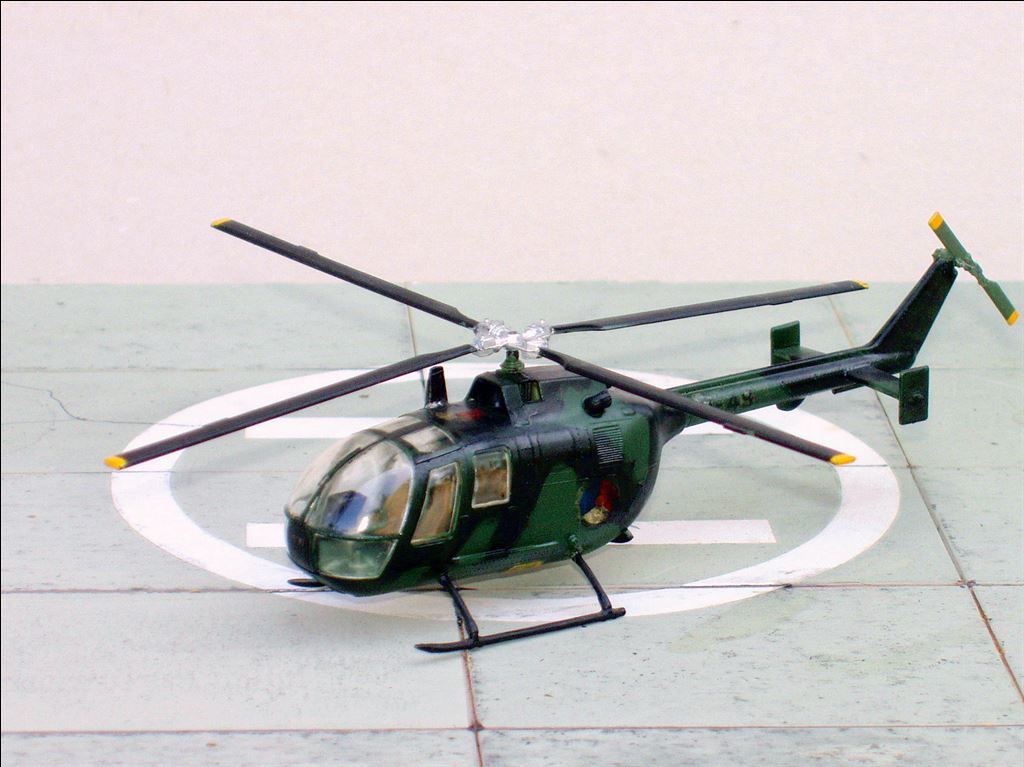 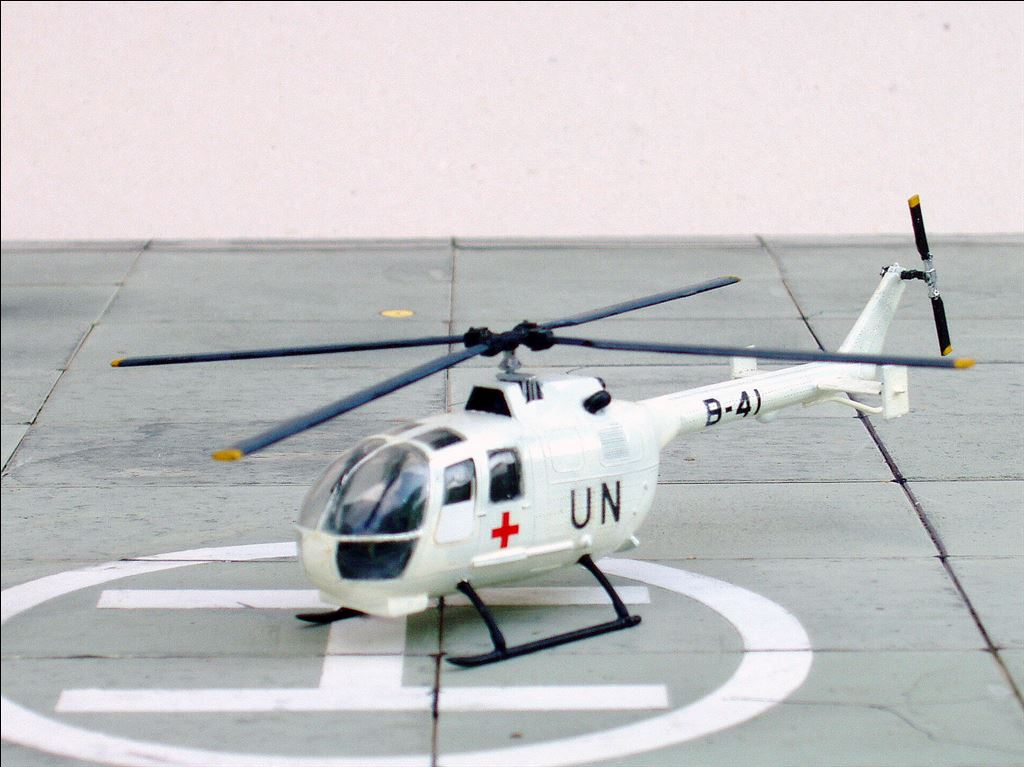 A model of a MBB B-105CB in white UN paint scheme, built by Adri Kleijn.

MBB Bo105C in the delivery scheme.