The McDonnell Douglas DC-10, the first design after the merge of McDonnell and Douglas in 1967, is the successor to the Douglas DC-8. In intended to transport more passengers over longer distances than the DC-8.

It incorporated a wider hull with an increased capacity and because of the use of more powerful engines, the aircraft was equipped with three instead of four engines thus reducing maintenance costs.
In 1968, American Airlines placed the first orders for twenty-five aircraft, soon followed by an order from United Airlines for thirty aircraft plus an option for another thirty aircraft.

The first flight was conducted with a DC-10-10 on August 29, 1970. This first aircraft type had a usual two-class layout for passengers, with a range of about 6100 km.

There was also a DC-10-10CF variant available (which could be used for both passenger and freight transport) and a DC-10-15 variant which was equipped with more powerful engines to be used in areas with high temperatures and / or great heights.
The subsequent DC-10-30 and DC-10-40 versions were intended for international flights and had a considerably extended flight range (10.010 km) as well as a third landing gear because of the heavier take-off weight.

A version with an even larger flight range, the DC-10-50, was designed but never built.
The production of the DC-10 stopped in 1989, with 386 aircraft delivered for airlines and 60 aircraft for the US Air Force.

The DC-10 was succeeded by the McDonnell Douglas MD-11, which mainly has a larger capacity.

Although the last commercial flight of the DC-10 took place in February 2014, cargo versions are in use. Despite the popularity of the type, only a few have been preserved in museums and other examples are kept in storage. Some DC-10s are also used for specific purposes, such as the Orbis International Flying Eye Hospital, which has a compartment where eye operations can be performed.

Doubts arose in the Vietnam War about the effective use of the Boeing KC-135 Stratotanker for the USAF. A tanker aircraft with larger capacity than the KC-135 was needed, because both aircraft in Southeast Asia and domestic aircraft had to be supplied with fuel. In 1972 two DC-10s and a Boeing 747 flew to Edwards Air Force Base, with the aim of simulating refueling in the air and thus determining the suitability of the aircraft.

During the Yom Kippur war in 1973, USAF operation Nickel Grass began to provide Israel with arms and supplies. The need for fuel supply in the air became noticeable because the C-5 Galaxy had to fly with less cargo due to the lack of landing rights in Europe. In order to eliminate this restriction in flight freedom, four aircraft were evaluated in 1975: the Lockheed C-5, the Boeing 747, the McDonnell Douglas DC-10, and the Lockheed L-1011. The only serious contenders were Boeing and McDonnell Douglas and on December 19, 1977 the McDonnell Douglas DC-10 was chosen. The main reason was the ability of the DC-10 to take off from shorter runways. After a first order of twelve aircraft, this number was later expanded to sixty.

These so-called KC-10 Extenders flew for the first time on 12 July 1980, but it was not until October of the same year that the first fuel supply was carried out in the air. The design of the KC-10 is based on the DC-10-30CF. Unnecessary features for passenger transport were removed, and the aircraft was equipped with advanced freight transport facilities and military equipment.

The most important adjustments were the addition of a fuel hose (Advanced Aerial Refueling Boom) and additional fuel tanks in the cargo compartments below decks. The extra tanks increased the fuel capacity to 161.488 kg, reaching nearly double the KC-135. The KC-10 has both a fuel hose in the middle under the fuselage and a flexible dry-and-hose system.

The control center for refueling is located at the back of the unit, with a large window for keeping an eye on the refueling. The boom operator controls the process by means of a digital fly-by wire system. Unlike the KC-135, the KC-10's and-drogue system is capable of refueling both US Navy, Marine Corps, and most allied aircraft in the same mission.

Other adjustments included the removal of most side windows and lower cargo doors.

In addition to its function as a tanker plane, the KC-10 can carry up to 66.225 kg of freight (or 77.110 kg when the aircraft is specifically equipped for cargo). The KC-10 has a cargo door on the side for loading and unloading cargo. An external lift system is required for in and out.


KDC-10 employed by the KLu

Both Dutch KDC-10's are used for refuelling and transport. They are stationed at Eindhoven Airport, at 334 Squadron. Of the 5500 flight hours in the first three years, the aircraft were used for half of the time as tankers. In addition to the commitment to the air force and NATO allies, the KDC-10s are also used for peace missions and humanitarian aid operations. In the first three years 32% of flight hours were spent on this.

The two Dutch KDC-10 tankers flew from the 6th of November 1996 on average three times a week to the Adriatic Sea to fuel IFOR aircraft in the air. The IFOR, a peacekeeping force led by NATO, was to monitor compliance with the cease-fire and to respect the border between the Serbian and Muslim-Croatian powers by both parties.

NATO decided in December 2000, following the normalization of air traffic over Bosnia-Herzegovina, to reduce the strength of the BKAC from 41 to 22 aircraft. Belgium and the Netherlands halved their contribution of fighter aircraft, which reduced the deployment of the KDC-10. However, NATO could call on a KDC-10 and an F-60 for the transport of wounded.

On Monday, January 3, 2005, a C-130 Hercules left for Estonia to pick up an emergency hospital and a medical team from the Red Cross. The next day this emergency hospital was transferred to a KDC-10, which flies to Indonesia with twenty tons of relief supplies.

The KDC-10 first flew to Medan where the emergency hospital and the medical team were unloaded. After this the aircraft flew to Batan to unload the twenty tons of relief goods. The KDC-10 subsequently loaded 25 tons of relief supplies in Karachi (Pakistan). These goods were finally delivered in Colombo (Sri Lanka). The plane returned to Eindhoven Air Base the same week.

On Thursday morning, January 14, 2010, a KDC-10 departed from Eindhoven Air Base to Haiti. On board was a rescue team that would help track down people buried under the rubble in an area hit by the earthquake.

In the past, the KDC-10 has been used, among other things, for the transport of relief goods and medicines in the Sumatra, Pakistan and Iran, which were hit by natural disasters. The transport plane also evacuated Dutch people from Lebanon in 2006 when a conflict broke out there.

The aircraft were deployed during the Kosovo crisis to evacuate refugees, to the Caribbean and America to offer assistance after hurricanes Luis, Georges and Mitch, and to various countries in Africa and Asia to provide development assistance. In 1998, the aircraft were used to evacuate Dutch from Indonesia during the fall of Suharto. Dutch KDC-10s operated from Manas Air Base in Kyrgyzstan to support Allies during Operation Enduring Freedom . 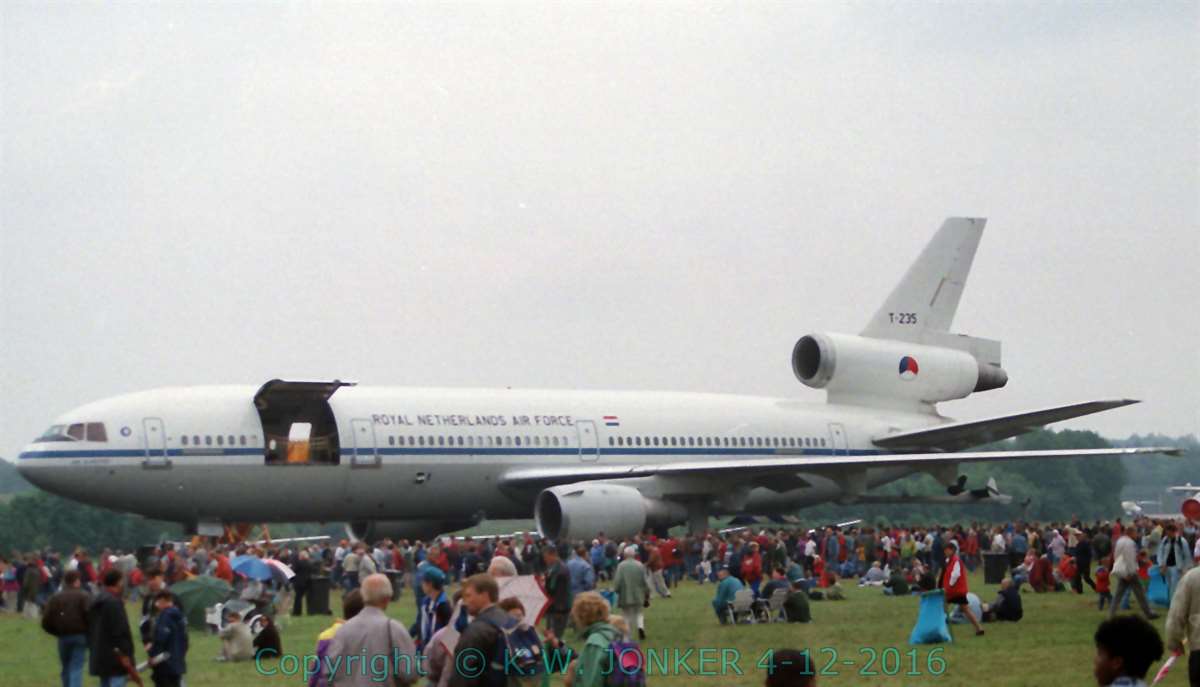 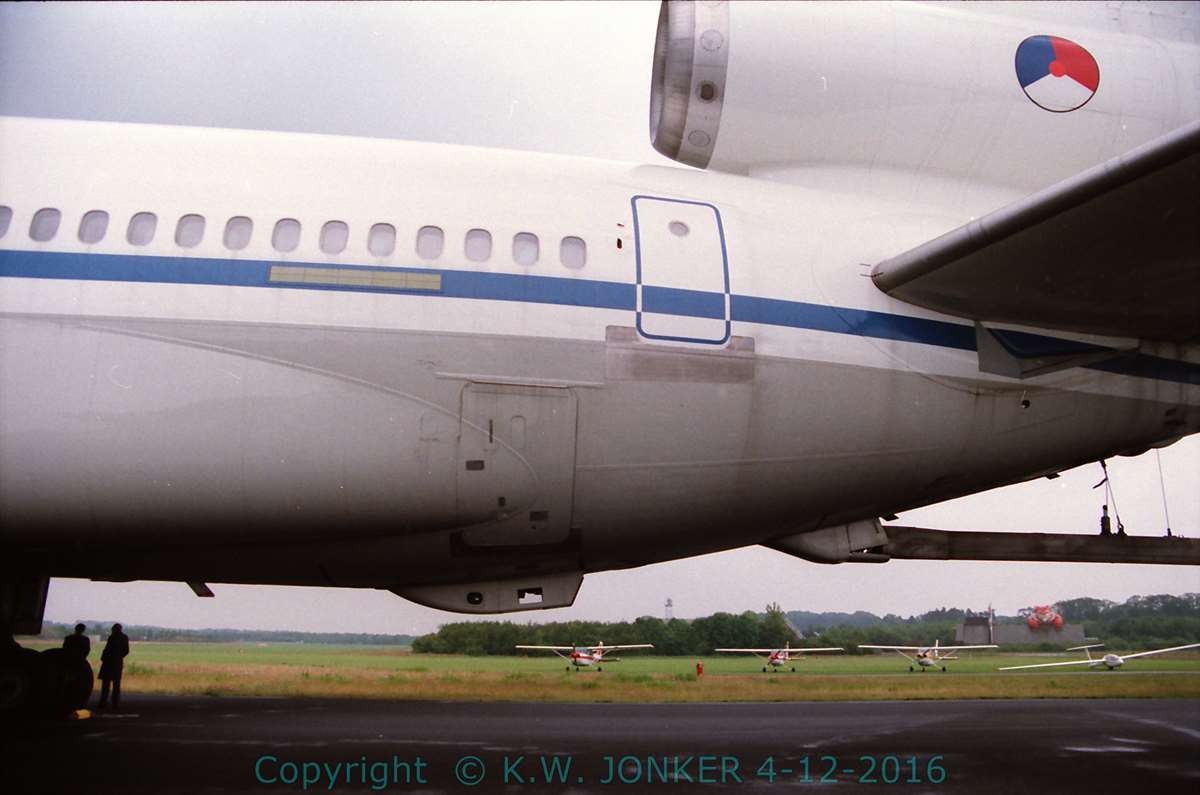 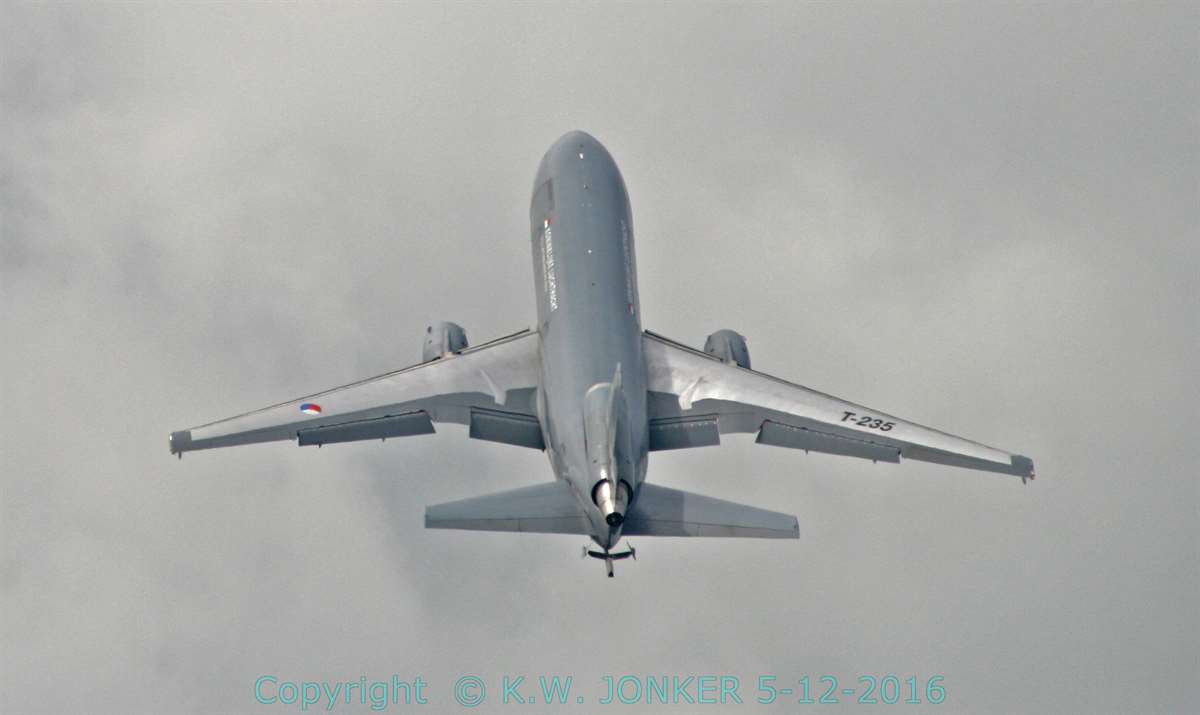 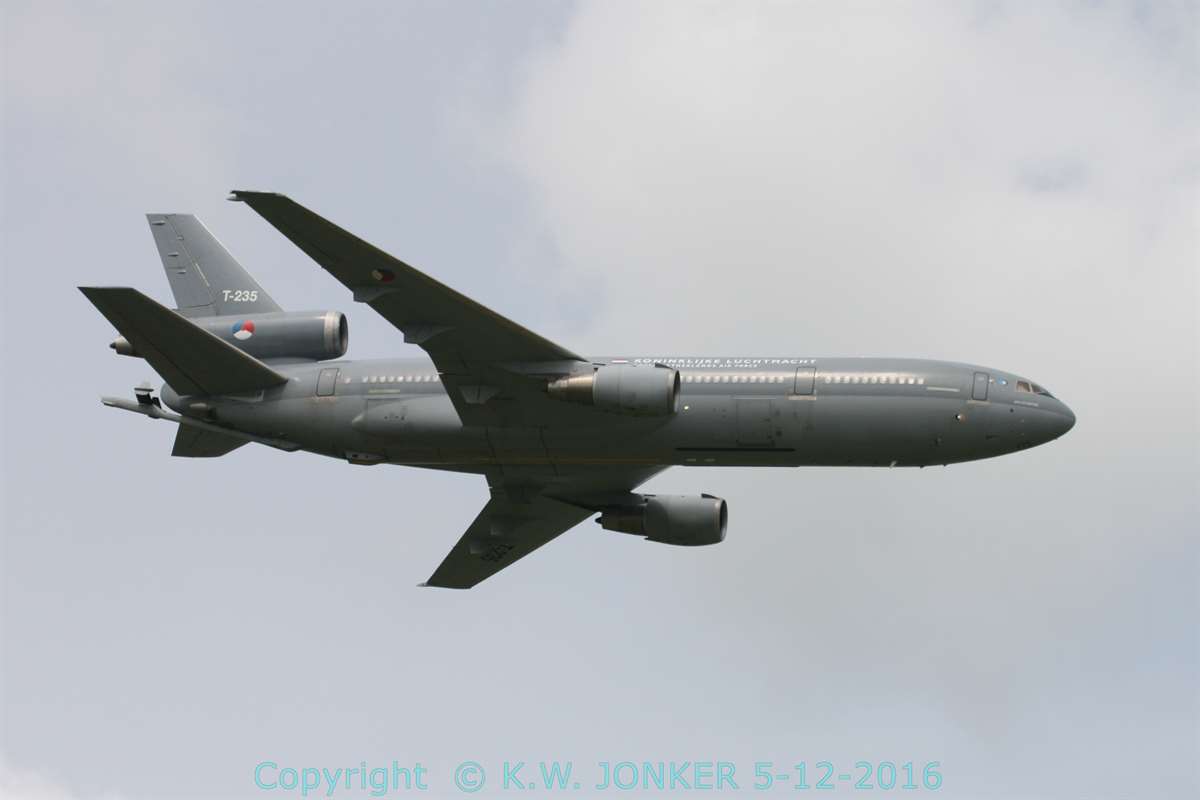 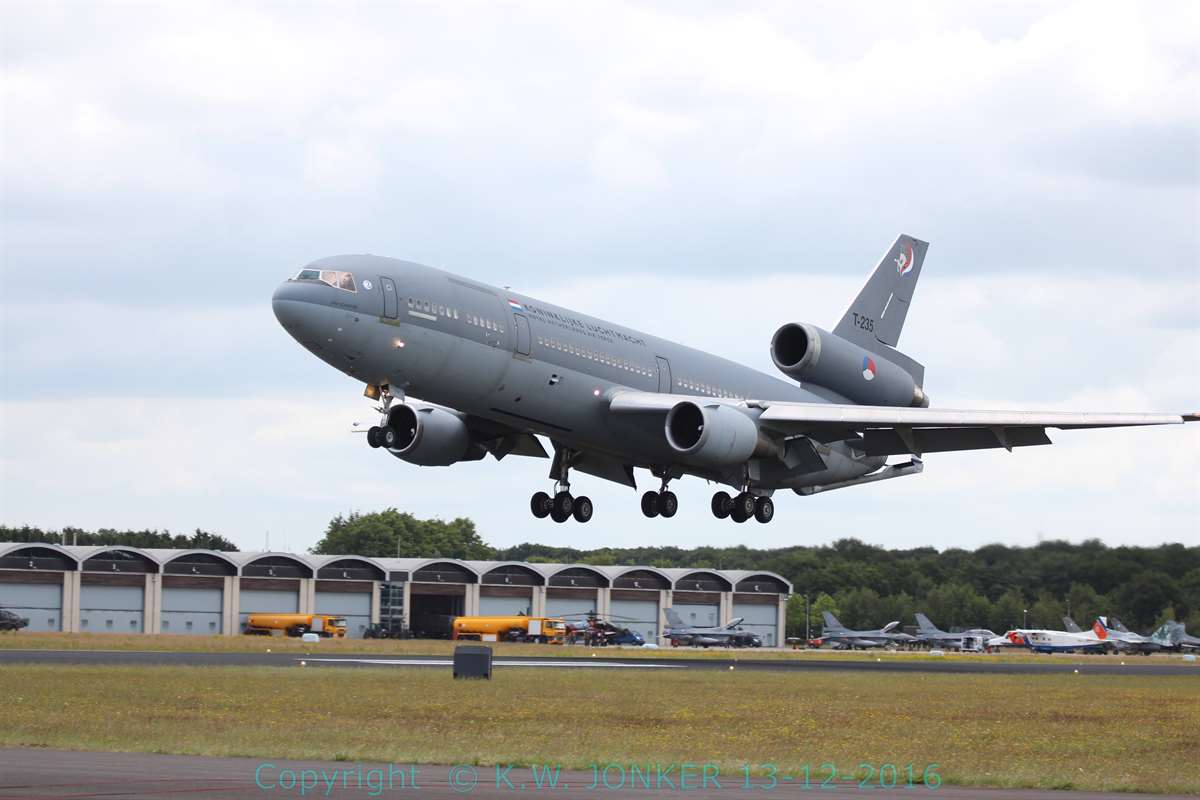 McDonnell-Douglas (K)DC-10, T-235, photographed in June 2014 at the Open Day Dutch Air Force at airbase Gilze-Rijen. Note the 70 Years 334 Squadron marking on the tail. Also the earlier white markings are replaced by black ones. 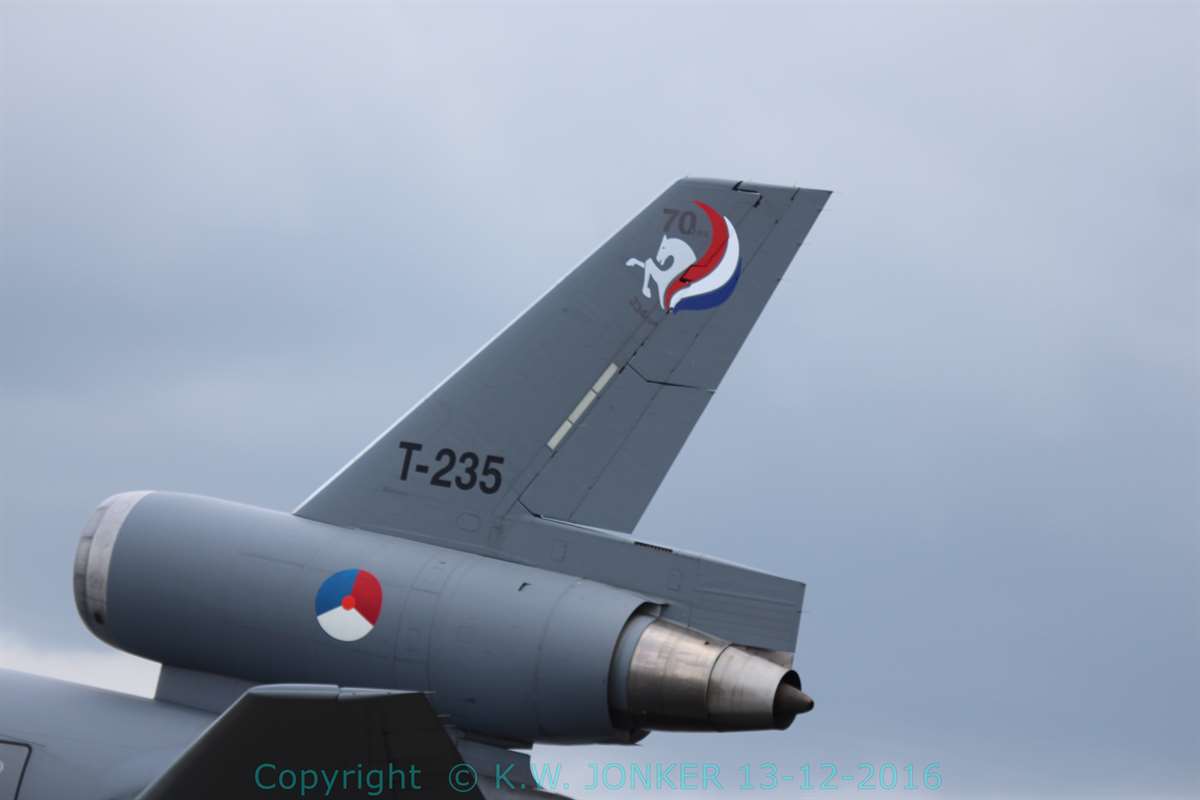 Last flight of the DC-10 cargo transporter, T-255. Left for England to be scrapped.

Hasegawa released several years ago a kit of a KDC-10-30 in 1/200 scale. This release contained an ordinary DC-10 kit plus additional decals for an RNlAF aircraft plus resin tanker parts. 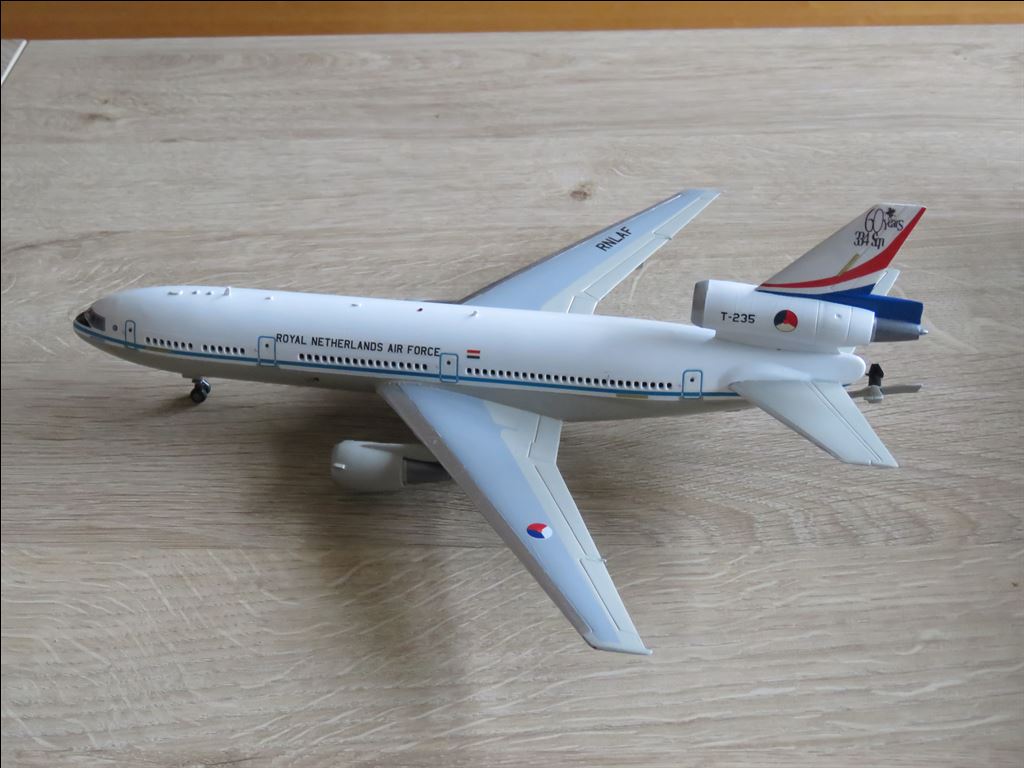 McDonnell-Douglas KDC-10: The Hasegawa model in scale 1/200;
Partly built by me spring 2017 and completed, that is especially fitting antennas, chassis and decals and painting by L. Charmant, for which my heartfelt thanks.. 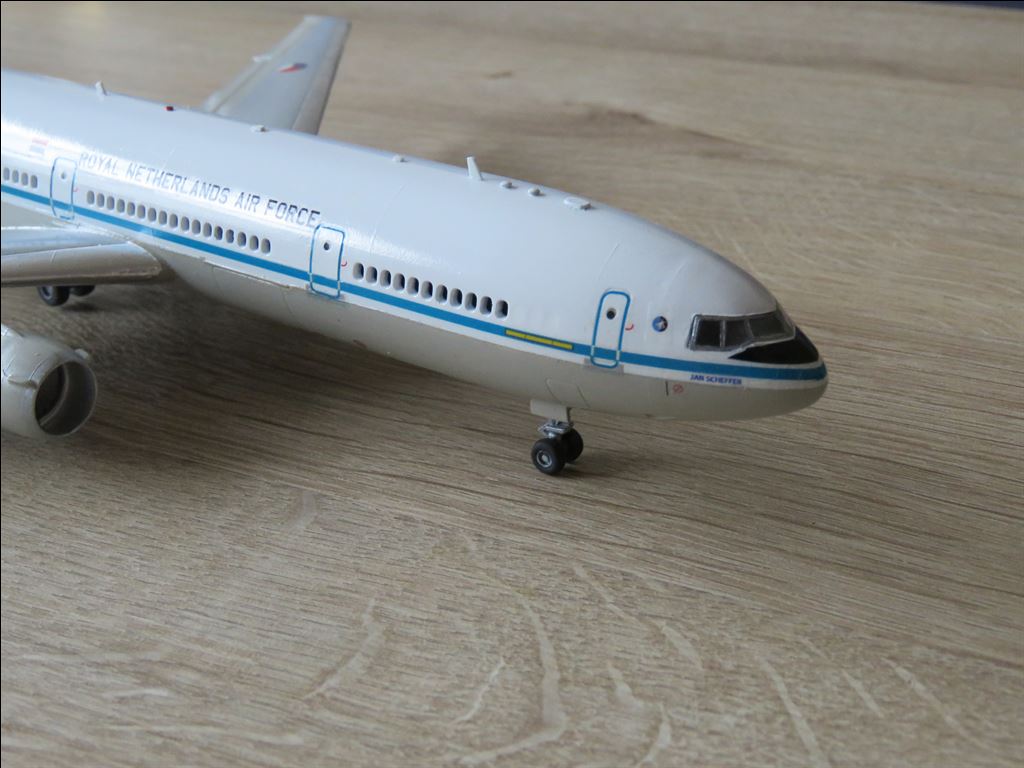 McDonnell-Douglas KDC-10: The nose with the homemade decals with the name, squadron emblem applied. 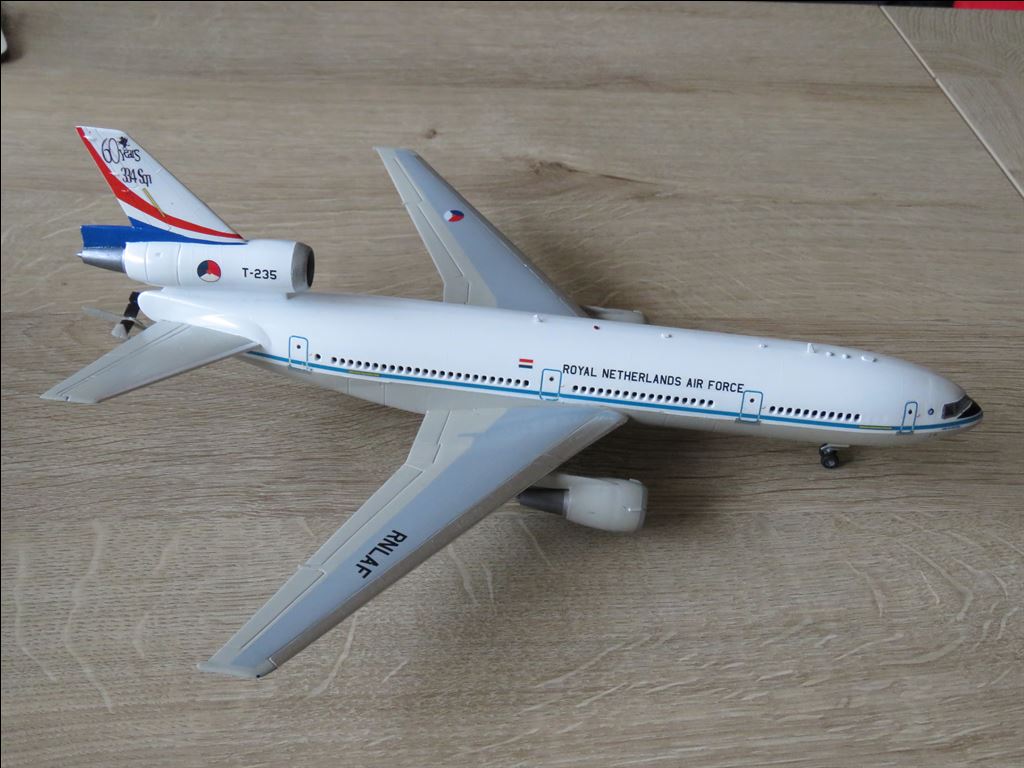 McDonnell-Douglas KDC-10: Side view. The model was finished as  T-235 with the anniversary markings with 60 Years 334 squadron. The decals are homemade. It turned out that the decals for the registrations in the kit were not correct (wrong font), but just right for this jubilee version. 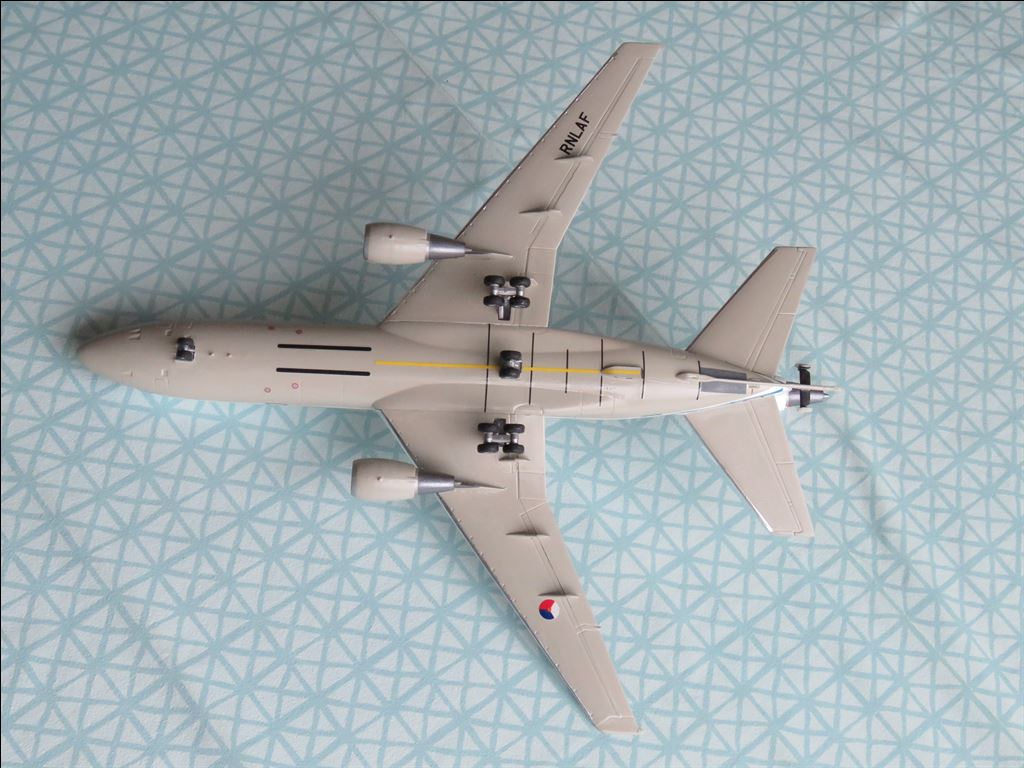 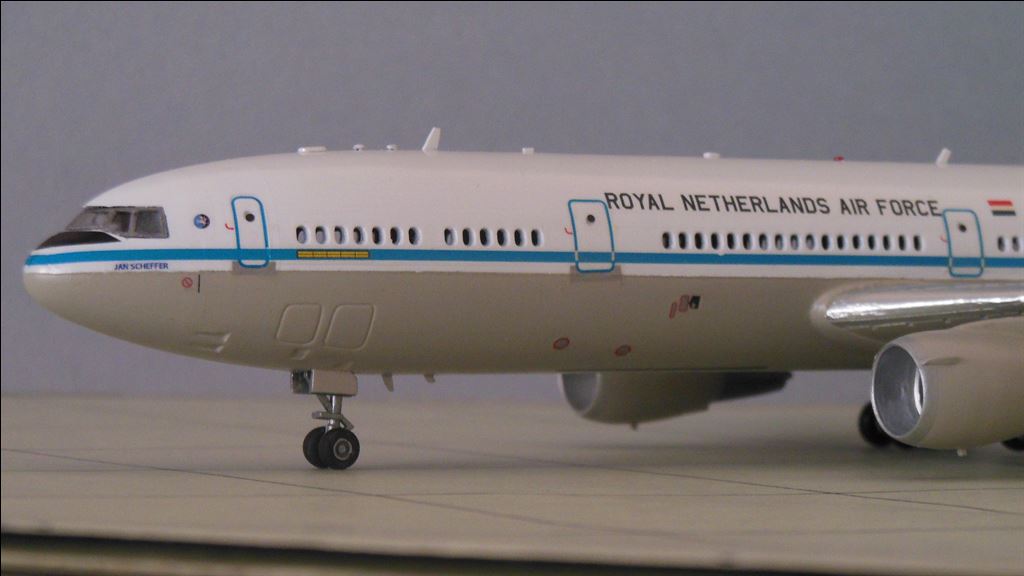 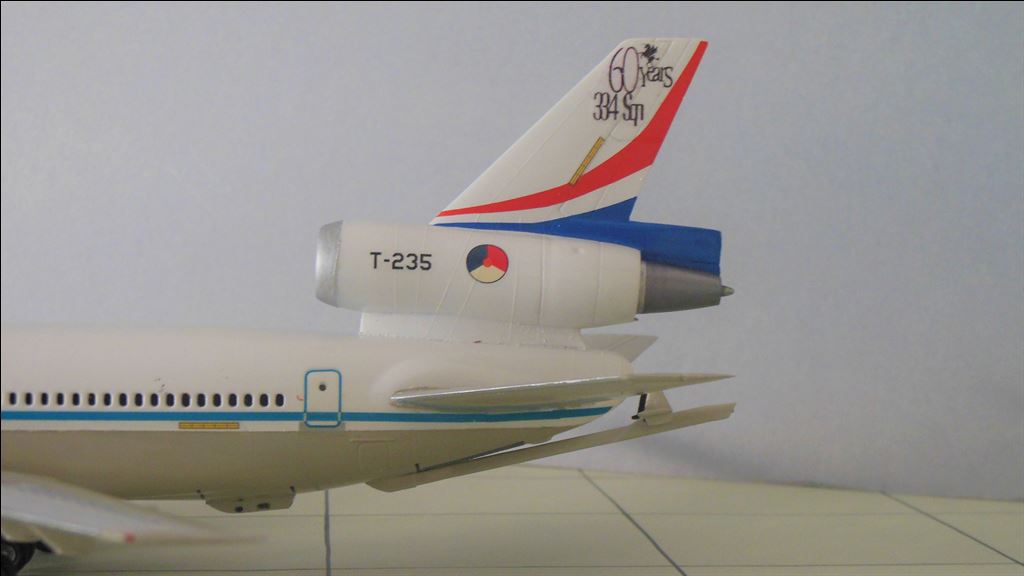 The delivery scheme of the McDonnell-Douglas KDC-10-30.

The second, overall grey scheme with white markings on the  McDonnell-Douglas KDC-10-30.

The second, overall grey scheme with the later applied black markings on the McDonnell-Douglas KDC-10-30.

The overall grey delivery scheme with black markings of the McDonnell-Douglas DC-10-30.

Special thanks to mr S. Scheffers, RNlAF for supplying me with the information about the (K)DC-10-30. Furthermore, my thanks go to Léon Charmant who provided the article about the development.