The American Republic factories started to develop the F-84F Thunderstreak at the end of 1949. See also the article about the Thunderstreak.

The third prototype YF-84F had the air intakes placed at the wing root in order to use a new radar system. The result was a loss of thrust, thus causing a lower performance, so the project was cancelled.
The outdated RF-80 needed to be replaced, so this prototype was used a a prototype for the photo reconnaissance version of the Thunderstreak.
The first preproduction model YRF-84F, 51-1828, was finished in February 1952. It differed from the original prototype in the enlarged air intakes. The nose was enlarged for the camera's and four machine guns were added in the wing root. A total of six cameras could be taken.

A large amount of different cameras was available, for several heights and also for day and night.
A maximum of fifteen different types could be used, to know: six forward looking cameras, one ‘TriMetrogen’ camera, eight ‘oblique’ and vertical cameras. These were of the type Fairchild K-17C, K-22 A, KA-2, T-11, K-38, each could be equipped with lenses varying form 6 to 36 inch. The Fairchild K-37 night camera to be used with flash-flares had a 12 inch lens. New at that time was the computerized Tri-Metrogen system, which modified the camera setting depending of speed, height and brightness.
At that time all photos were black-white, radar photography or infra-red was not used yet.
The nose had several hatches, so vertical and also oblique photos could be made. These hatches could be operated hydraulically; also a recording system for the pilot was available. The pilot had also a periscope to take a vertical look by himself.

Flight tests made it necessary to add four aerodynamic fences on top of the wings. In June initial order for 41 aircraft was signed. Delivery started in March 1954 to the 363 Tactical Reconnaissance Wing. Time became urgent for Republic, because McDonnell made progress with the RF-101 Voodoo. The Thunderflash was equipped with the Wright J65-W3, also used from 1955 in the Thunderstreak. From production block 20 the more powerful Wright J65-7 was used. For extra power at take off four JATO rockets could be used.

The last and 716th Thunderflash was delivered in December 1957.

Twenty five Thunderflashes were modified to RF-84K for the FICON project. Also two RF-84Fs were modified and equipped with claws at the wing tips because of the Tom-Tom project.
Probably the Americans had this idea because of the Russian Zvjeno-program, launched in August 1941 and resulting in the destroy of a bridge by twelve Polikarpov I-16’s, which had be launched by six Tupolev ANT-6-bombers.
A German test pilot, ir Hohman, was in charge of project MX-1081. AB-29A Superfortress and two F-84B Thunderjets were hooked to each other with the wing-tips. Earlier test with a Dakota and two Cilver QP-47’s had positive results, though the hooking of the aircraft was very dangerous. During a test flight on April 24, 1956 one of the F-84’s started bouncing and made a roll towards the B-29, thus causing a crash of all three aircraft and killing all of the crew. Project MX-1018 was cancelled immediately.
Another project, ‘Tom Tom’, was started in the meantime. The wing-tips of a Convair RB-36F were equipped with extendible arms. An modified RF-84 could hook on to these arms with one of its wing-tips. The only modified Flash, no 53-1849, almost crashed when it started to bounce also, broke free from the bomber and rolled, luckily to the opposite direction of the bomber. The Convair test pilot Ericson managed to make a safe landing at air base Carswell.
One month later, at the end of 1953, ‘Tom Tom’ was officially cancelled.

Progress went on with the Fighter Conveyor-method (FICON). One F-84 could be taken under the belly of a B-36. McDonnell had developed in 1947 the XF-85 Goblin, a small fighter with fold-able wings, which fitted in the bomb bay of the Convair B-36. The manoeuvrability of the Goblin was very poor, so this project was cancelled.
Convair was ordered to modify a RB-36F to carry a F-84E which was a larger aircraft than the Goblin. With some kind of ladder the F-84 could be released. When the aircraft returned the pilot used a hook on the nose to couple the aircraft to the bomber. The first test was done in January 1952.
Initially the FICON project was meant for the protection of the bomber, later the carried aircraft was used as bomber, so the rather vulnerable B-36 would fly across the target, especially with reconnaissance missions. The test were made with the original prototype of the Thunderflash, the YRF-84F. The rather high mounted stabilizer was moved to a lower position to stay free from the bomb bay.
The Thunderflash pilot could stay in the more comfortable B-36 and climb in the cockpit when necessary. The US Air Force had Twenty-five Thunderflashes modified which were grouped with 91st Strategic Reconnaissance Squadron under the designation GRF-84F, later changed to RF-84K. The ten Convair GRB-36D’s were delivered in February and March 1955 delivered to 91st Strategic Reconnaissance Wing. The test flights suffered many problems, so the system wasn't used operational.

A total of five Tactical Reconnaissance Wings of the USAF used the RF-84F, such as the 10th and 66th Tactical Reconnaissance Wings of the USAFE.The first aircraft arrived August 1955 at Sembach, West-Germany. The American used the arrival of the aircraft also for publicity, on a open day for the press, the journalist could choose a target, the photos of the target were delivered within three hours.
In 1958 the Thunderflashes were replaced with the McDonnell RF-101C and in 1960 all USAF Thunderflashes were withdrawn from use and handed over to the Air National Guard and several NATO members.

The Netherlands replaced the Thunderflash the RF-104G Starfighter and two RF-84Fs were handed over to Greece in 1963. The last Greek Thunderflash was withdrawn from use at the end of the eighties. Friday July 28, 1988, after a journey of five days one of the former Dutch RF-84s, ex P-5, landed at airbase Volkel. This aircraft is now on display at the Militaire Luchtvaartmuseum at Soesterberg.

In service with RNLAF: 306 squadron

The Thunderflash entered Dutch service in 1955. At the beginning of 1995 the conversion the new type started  and personnel was trained at Sembach. Also several aviators and technicians went to the USA for a conversion course.

306 squadron received three Lockheed RT-33 for training purposes. Alas one of these aircraft crashed, so only two of them entered operational use by 306 squadron.

In 1955 the Thunderflashes arrived together with Thunderstreaks and F-86K Sabres with US Corregidor and US Tripoli, in 1955 at Rotterdam.
The first two RF-84F’s were officially handed over to 306 squadron on April 22, 1956. In the period 1956-1959 the remaining aircraft were added.

At the beginning of 1958 306 squadron could join Royal Flush. Together with another, English, 2nd ATAF-member the squadron became the champion of the Royal Flush in 1959.

The Dutch Flashes were all of production blocks 10 till block 31. Initially no brake chute was applied to the aircraft. The chute was later added after a modification in 1958 and 1959.
March 22, 1963 the first six Thunderflashes were handed over to the Turkish air force. April 23, 1963 two aircraft went to Greece. 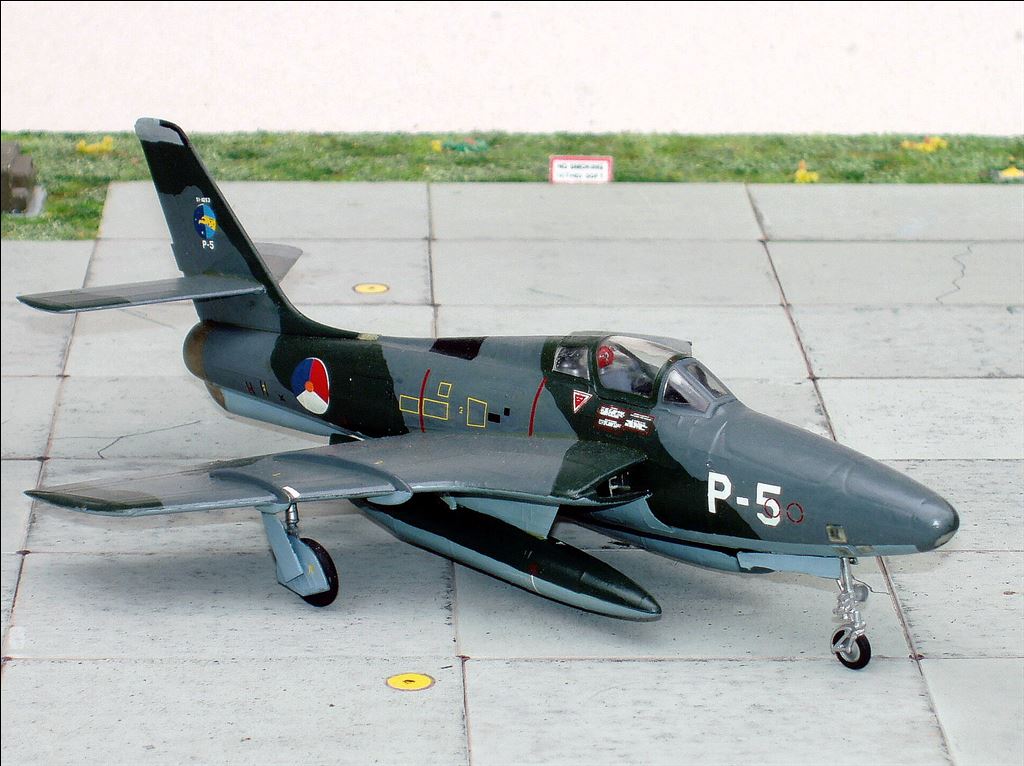 A model of a Republic RF-84F Thunderflash, the Italeri kit, built by Adri Kleijn.