During my summer holiday I often take a small crate with some modelling stuff with me. Summer 201 I decided to start building the old Heller Focke Wulf Fw 56 Stösser: a nice and rather simple kit. 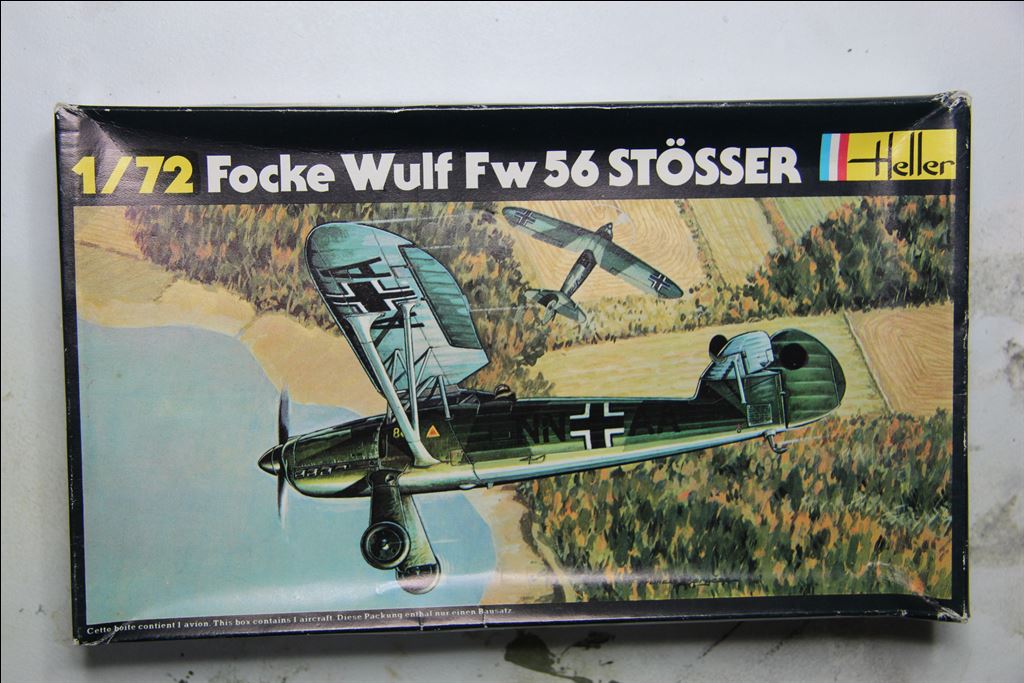 The Heller kit of the Focke-Wulf FW-56 Stösser. 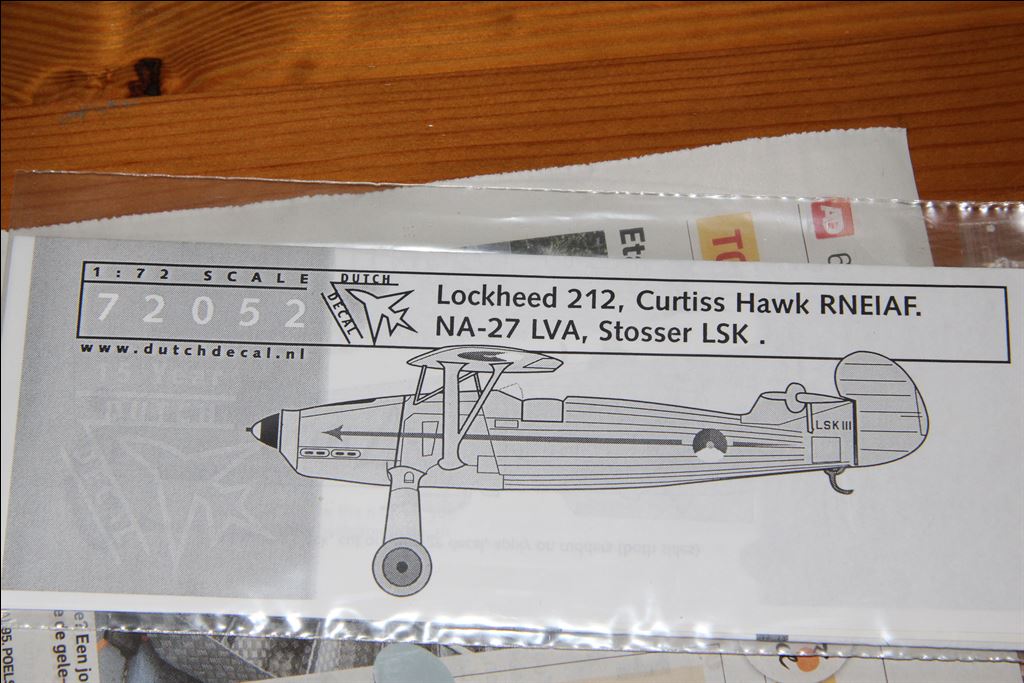 The kit itself is a nice, bu somewhat Spartan kit. The interior is quite basic. So I started to search on the internet for information about this aircraft and soon I found this web-page which contains a very useful building report of the same kit. I used the information on the page for the interior an the engine of my model.

At first i added some detail to the cockpit section such as bars of the frame of the fuselage an some pieces of plastic to represent some instrument panels. 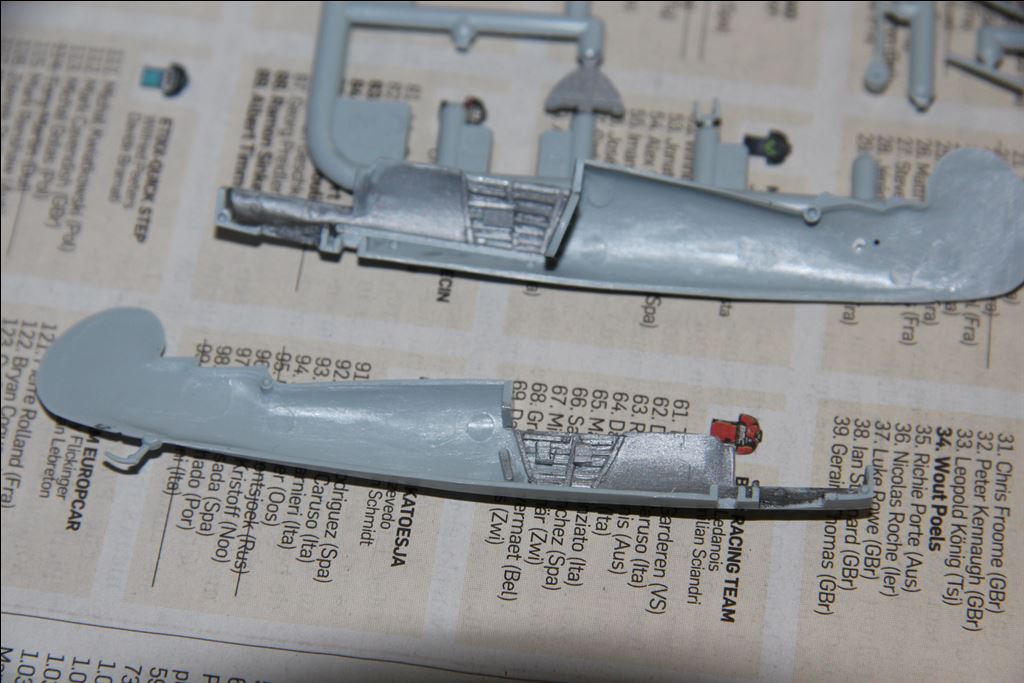 I painted these with Humbrol 56. Also the seat, stick and both pedals I modified. The stick was rather thick and I replaced it with e piece of electric wire. The pedal I made out of some pieces of plastic. Further i added seat belts. i used cigarette paper which I paint in the colour needed, for these seat belts I used grey, the buckles I painted with Humbrol 11. 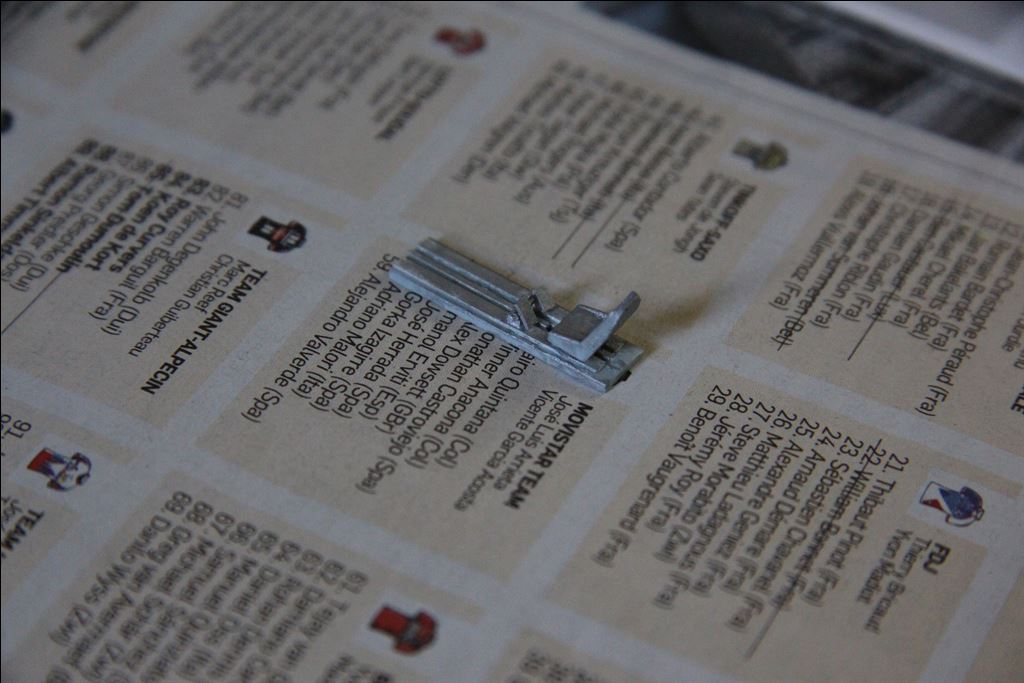 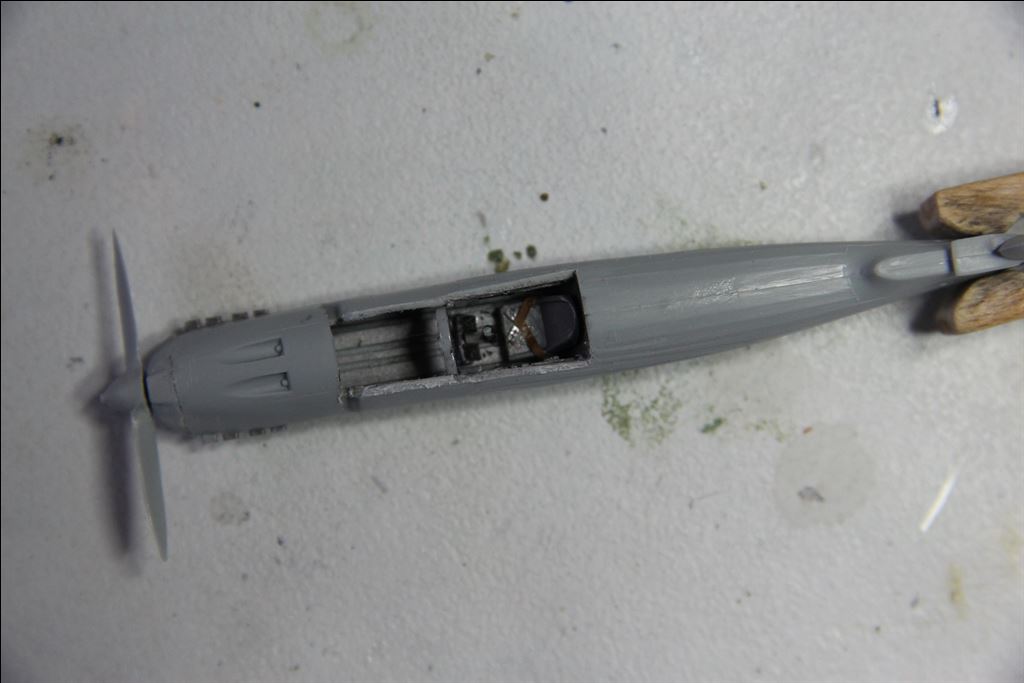 The instrument panel of thee kit has some tiny lines representing the instruments. I painted the panel overall black, Humbrol 33.  The panel lines I tried to 'dry brush' with some aluminium paint. Alas the result was not as good as I hoped for.

There is no engine present in the kit. The web page mentioned above shows a nicely scratch built engine. I tried to imitate this with some thick plastic rod and a piece of plastic. Further I also opened  the air intakes. 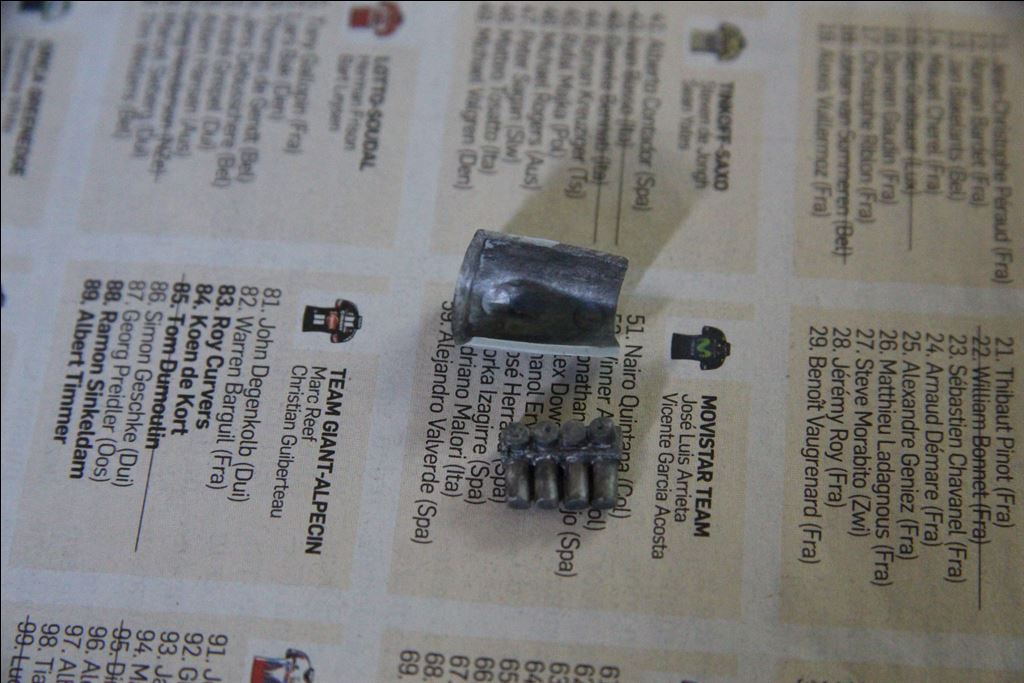 Some measuring was needed to get the engine fit into the engine compartment.

The exhausts are a bit of a puzzle, on one side some tiny parts have to be glued but I could figure out how these parts must be positioned.

The single main wing consist of one piece. It is supported by four spars which have to be mounted to the fuselage.

It was a challenge for me to attach the few wires. The manual, actually a kind of "exploded view" showing all parts, is not quite clear at this point. I decided to glue the bars first to the wing and then drill the holes for the bracing wires. The fuselage of the kit features some (rather large) holes for the bracing wires. In fact you have to apply the wire before gluing both fuselage halves together.

The mains spars are supported by two smaller bars leading to the wing. Just were these bars are connected tot the main spars, the wirings is attached.

The fuselage with the wirings. 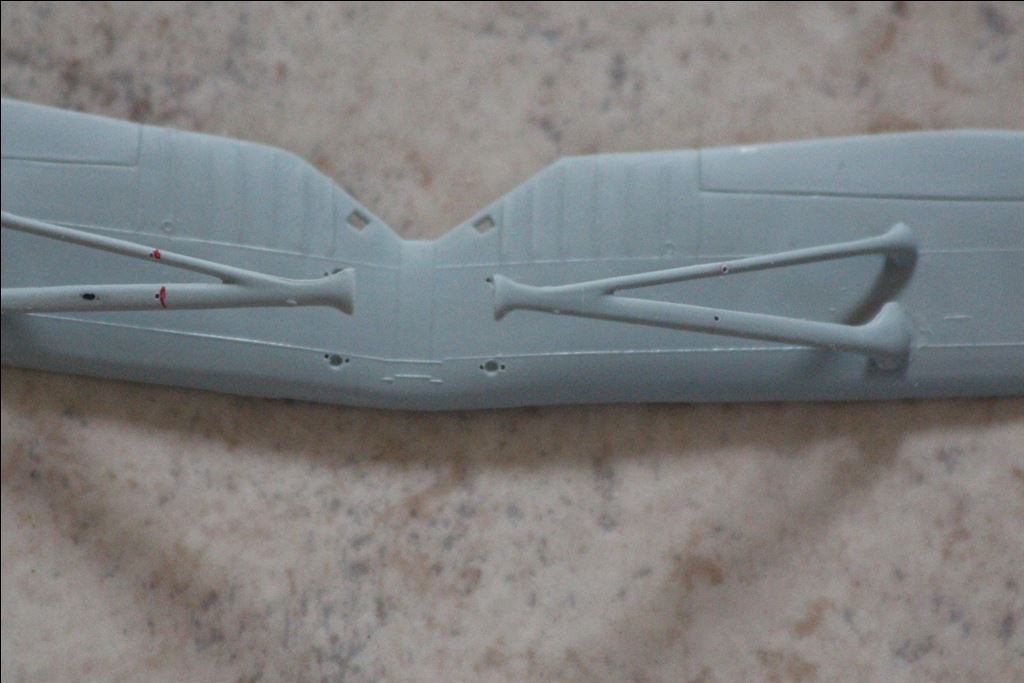 The wing with the spars an the drilled holes for the wiring.
I aligned the spars as good as possible and dry fitted them tot the fuselage. The position were they have to be connected is shown a bit vague on the fuselage.

Both wings and fuselage i sprayed with Tamiya grey primer.

Then I sprayed RLM63, Revell 36176; this colour looked almost the same as the primer.

Next I added some Pledge Polish for Wooden Floors (this is similar to Future PLus which is not available in the Netherlands). The decals were nice and thin and could be easily added. 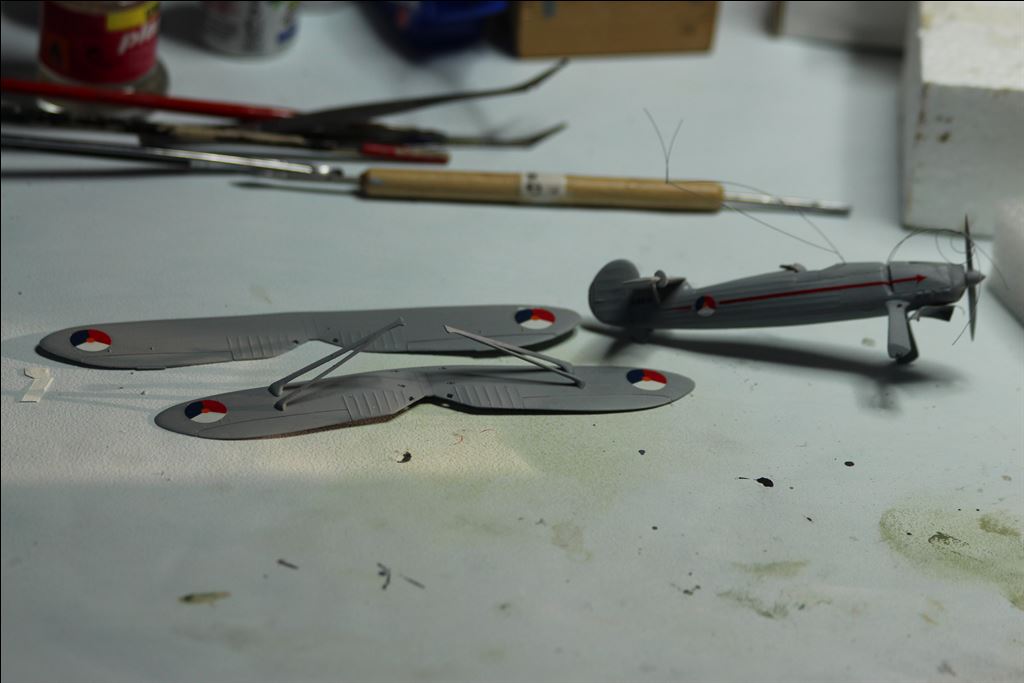 The fuselage an the wing ready to be put together.

It was quite difficult to get the wings fitted good aligned to the fuselage, but I succeeded with help of some squeezers. 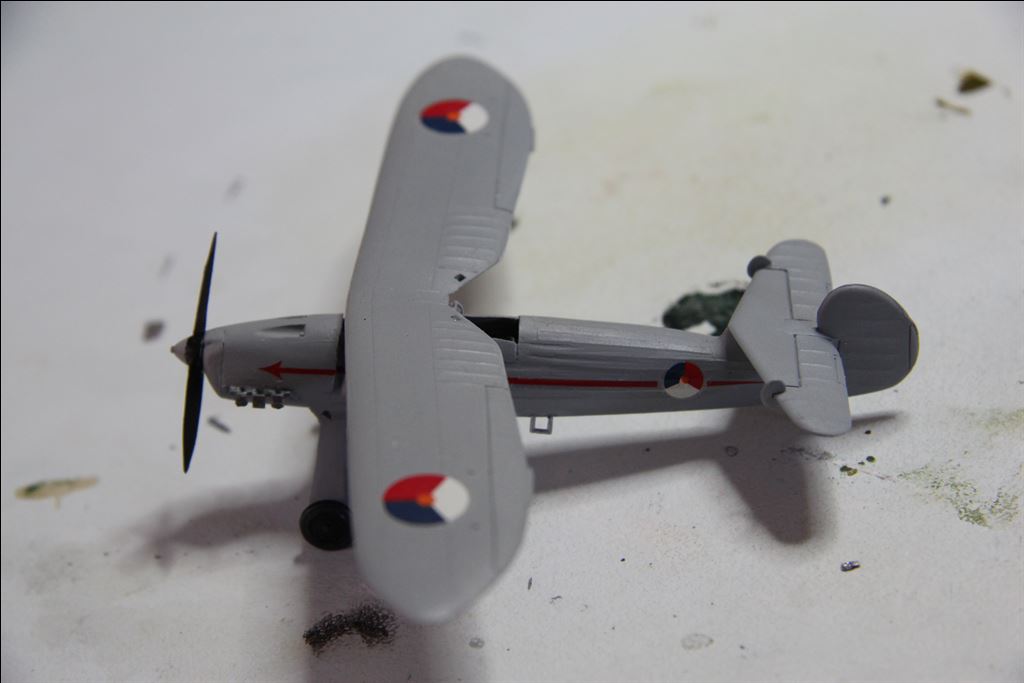 In the end a nice tiny model.