During the Open Day 1970 at Volkel Air Base is the first demonstration of the Fokker F.27 was flown.

The following years the F.27 was a regular guest of the open days of the Air Force, in all cases was the Major B. Soons the pilot`.

In 1973 it was flown with a completely white aircraft, the C-7. This was used at that time for United Nations missions.

A novelty was that the use of smoke to make the display more attractive. The technical service of 334 Squadron had made a construction with a diesel tank, pump and nozzle fitted to diesel was sprayed in the hot exhaust.

In 1982, not only a new team was formed, now consisting of the Major J. Jutten, Captain J. Reffeltrath, Sergeant I Van Beek and R. Nahon and as a coach and spare J. van den Broek. Also the program was renewed and expanded to a seven-minute show. The show was carried out with the C-8, or with the C-10.

In 1983 the team won again a prize at the international Air Tattooo and won an honorable third prize in category Best Flying Demonstration by an Overseas Participant.

In 1983, Major J Jütten left the team and was succeeded in 1984 by Captain P. Schneider as co-pilot.
The show was again renewed, and especially the last part of the show was spectacular with a low pass, followed by a steep climb immediately followed by a roll with maximum slope, giving the impression of a looping.

In 1984 there was a slight problem when, during at the end of the display in Copenhagen, a long flame started behind the right engine. Fortunately, this incident ended well.

In 1985 the team was invited to participate in the 25th anniversary of the Italian Frecce Tricolore. The show was also flown in front of the Italian president.

For 1986 Captain P. Schneider became the leader of the team with the second pilot B. van Asselt, flight engineer sergeant-Major J. Bisschop and second lieutenant M. Spit, for the PR and coaching.

In 1987 P.Schneider unexpectedly departed and J. Reffeltrath was again asked to lead the F-127 display. He formed a team with as co pilots B. van Asselt and second lieutenant J. Maasdam (who alternated) and further R. Nahon, J. Bisschop and M. Spit. This season was awarded a satisfaction vindication of Major General Vendrig.

In 1988 B. van Asselt was now transferred to 336 squadron and had left the team, which appeared with a specially painted Fokker to mark the 75th anniversary of the Royal Netherlands  Air Force. 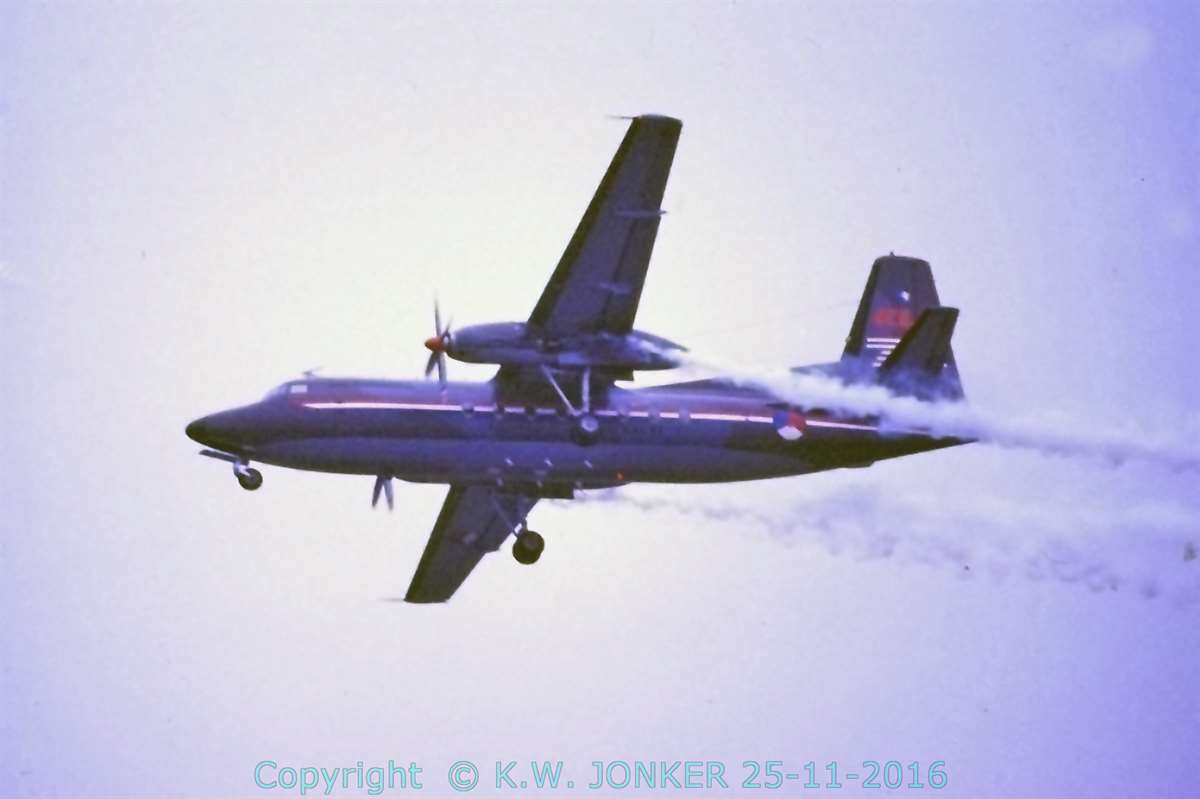 In May 1988 following show was flown in France:

Below the show flown in June 1988 at air base Deelen because of the 75th anniversary of the RNlAF. 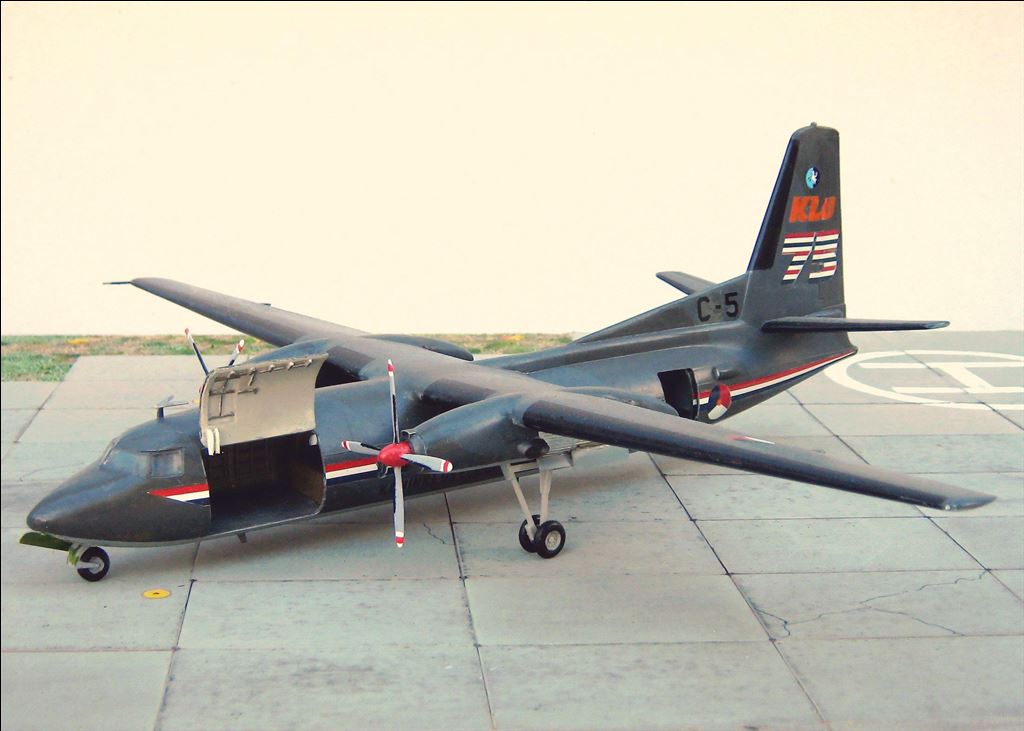 A model of a Fokker F.27 Troopship in KLu 75 scheme, built by Adri Kleijn. 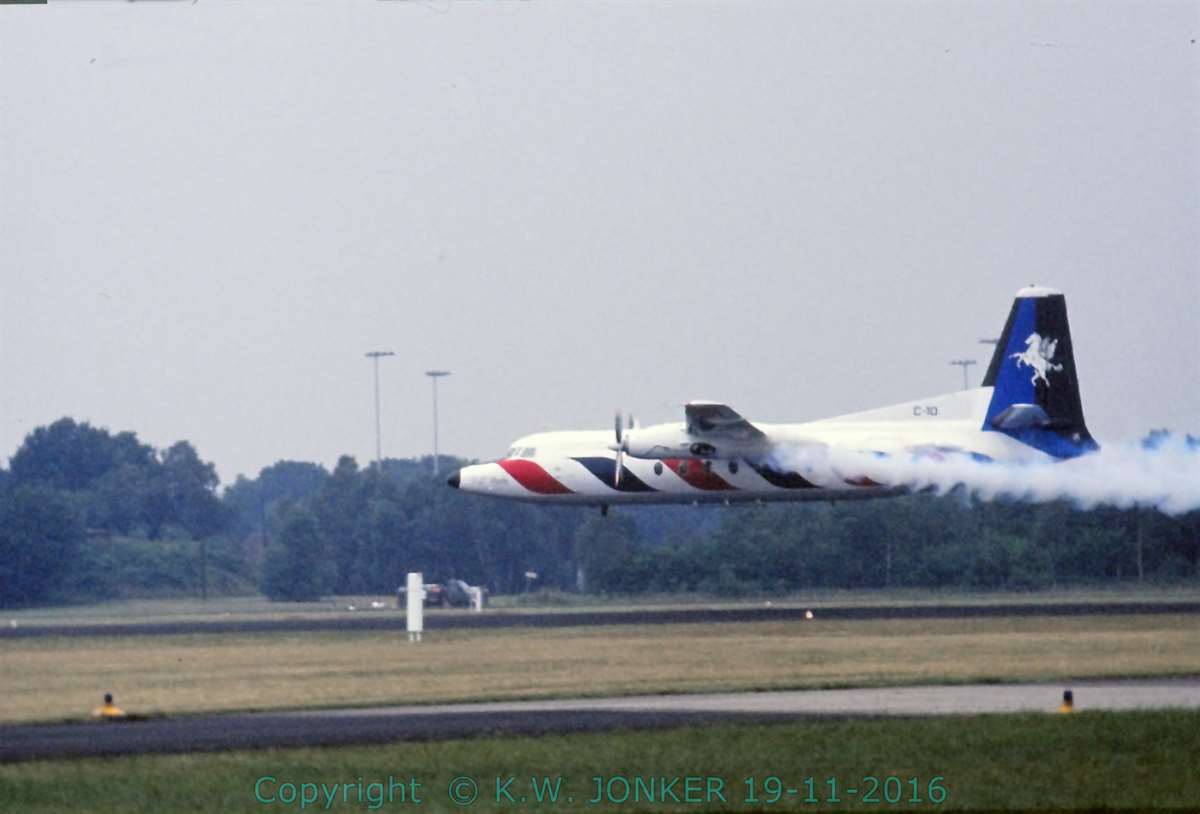 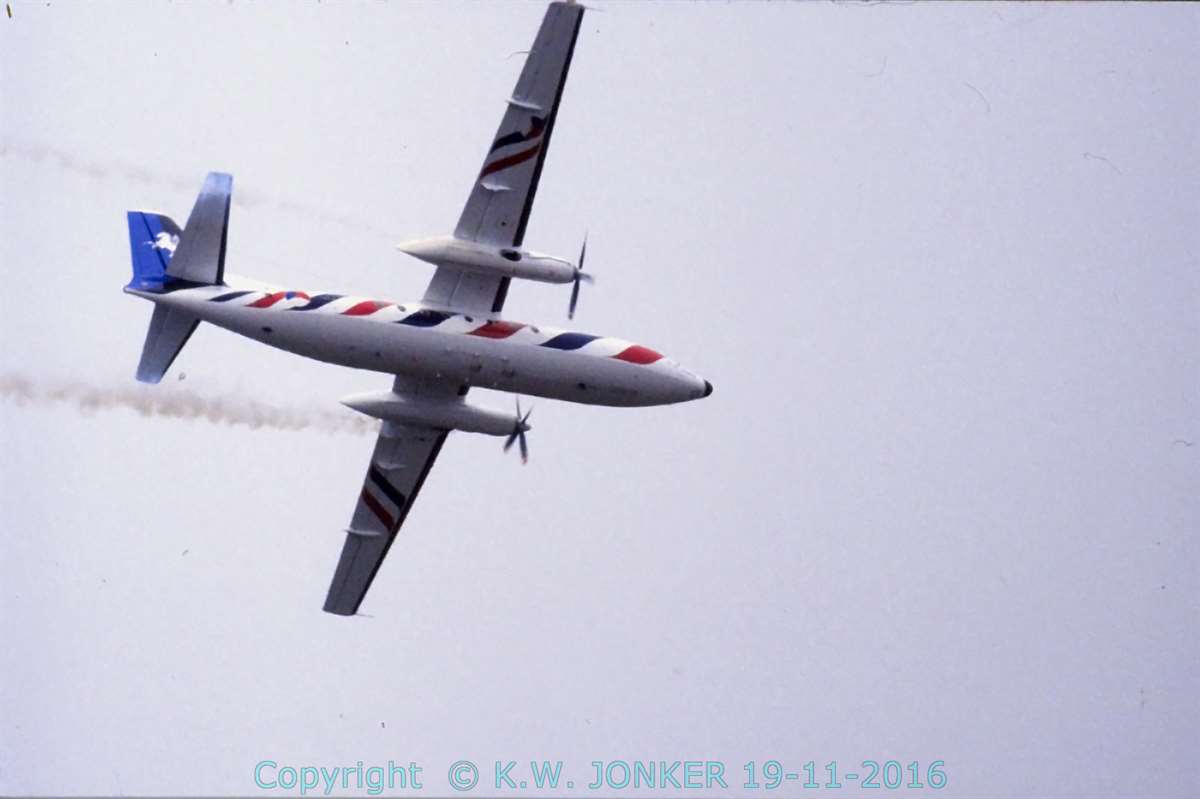 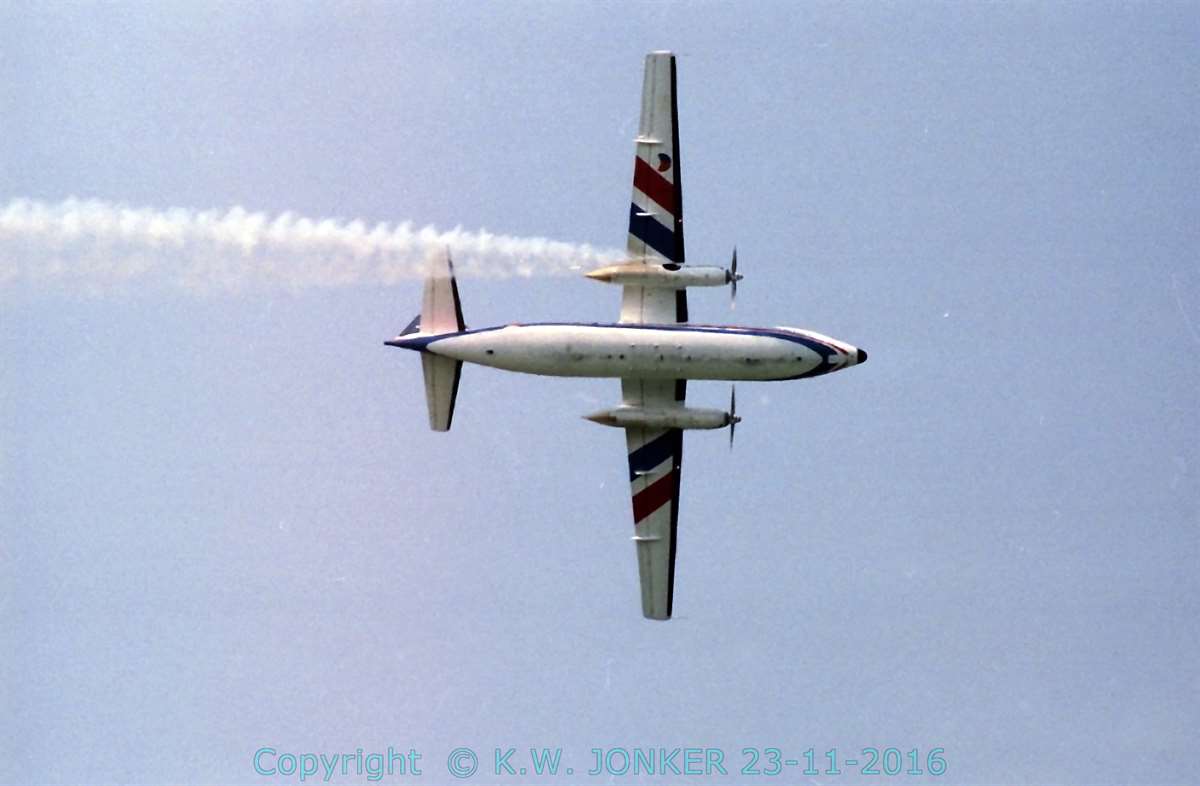 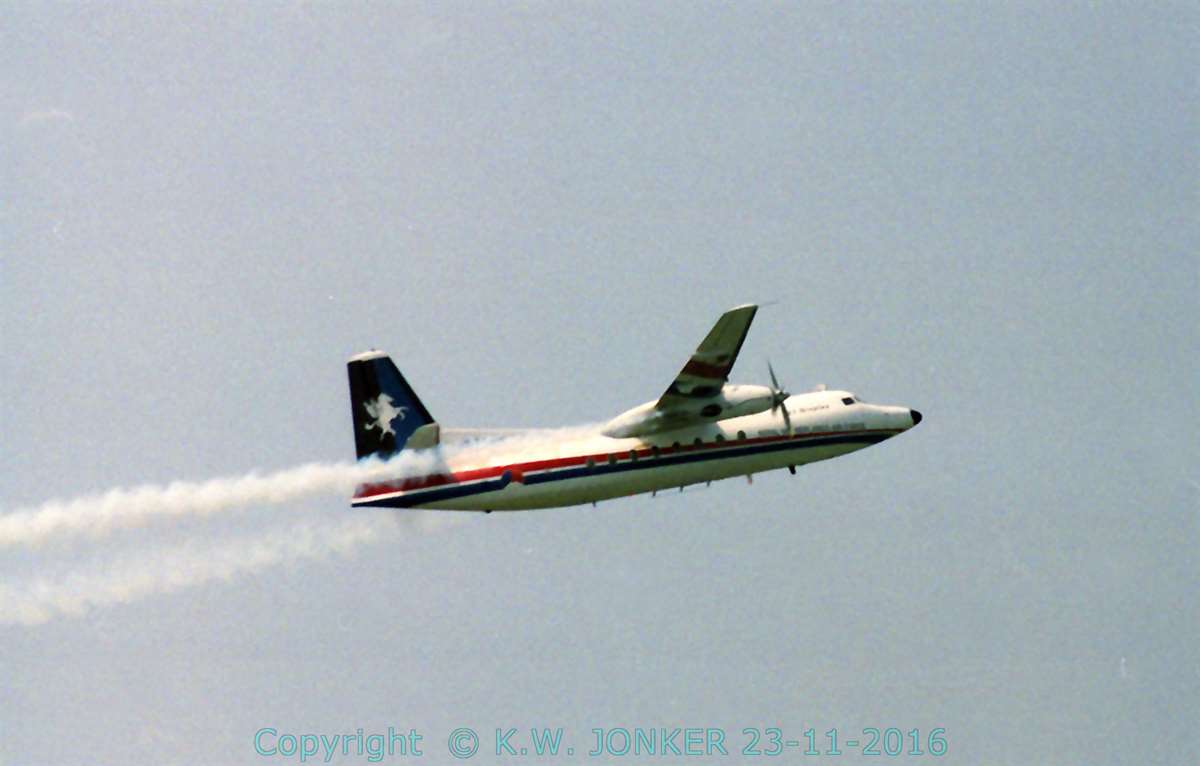 Below a video shot of the display at RAF Leuchars Airshow in 1995. The show started wit a very low pass just after take off.