This web page I dedicate posthumously to the late R.L. van Beers.
I owe him very much for most of the information and photos, he was willing to provide me.
Furthermore he managed to get very many names and addresses of the former members of this display team.

Early 1955 no 323 squadron, based on air base Leeuwarden, raised an ‘Aerobatic Team’. The squadron was equipped with the Gloster Meteor Mk.8. It is not known who initiated the order, but probably it was the squadron leader major Paul Verspoor.
Some experience in display flying was available in the squadron, major Verspoor had formed a display team with Mustangs years earlier in the former Netherlands East Indies, together with Senior Master Sergeant Manus Mulder and sergeant-major Ron van Beers.
This display team, no 122 squadron NEIAF (ML-KNIL) flew with the famous P-51, based at air base Medan, Sumatra.

The main reason for the Meteor display team was to participate in the ILSY (Internationale LuchtShow Ypenburg = International Air show Ypenburg. The Royal Netherlands Air Force organized a competition for this air show.
The team did have to win form the teams of the other squadrons. major Verspoor and his crew were supported by major Van Gastel.
Major Verspoor became leader of the team; the second man became captain Frans van der Vijgh, number 3 senior master sergeant Manus Mulder, number 4 was sergeant-major Tonnie de Bie. Reserve, also for the solo display, was sergeant-major Ron van Beers.

The journals of Manus Mulder mention that he made his first training flight with Meteor Y9-12 on February 8, 1955 . This flight took about 56 minutes.
March 29, 1955 the maiden flight of the whole team was made. The squadron diary states: ”De eerste vlucht van het stuntgeval ging echter behoorlijk beroerd en is voor verbetering vatbaar”, [The first flight of the stunting thing was quite miserable and susceptible for improvement.]  So the team continued practising.
About 52 hours of training is noted from March til may, 26. According to his journals he used Meteors Y9-30, Y9-29, Y9-32, Y9-33, Y9-26, Y9-18 and Y9-21.
The program was quite difficult at that time. Every figure started with a ‘Port of Echelon Right’ formation. The figure ended in a different formation.
The team was the first team of the RNlAF using changing formation. Within a month sergeant Jansen joined the team. He was, besides reserve, also the solo display.

After a training period of about on and a half month the real contest was participated, to decide which team would go tot the ILSY. Unfortunately the “Dash Four Aerobatic Team” from air base Volkel flying with Republic F-84G Thunderjets, won the contest.
Remembering this happening, major De Bie noted, that possible a valuation mistake (or possible over estimation) let the Dash Four team win the contest. This team was flying the normal program, instead of, due to the clouds present, the so called bad weather program.
The Meteor team was allowed to join the supporting program of the ILSY. On may 30, 1955 the team flew to air base Valkenburg and started for a show af about 32 minutes over Ypenburg. The same day the team returned to air base Leeuwarden, due to bad weather the team had to move out to air base Eelde. The next day the team returned to Leeuwarden.
The top event in the short existence of the team was a display at Sydenham Airport, Ireland. June 9,1955 the team flew from Leeuwarden via Waddington to Aldergrove. Sergeant Jansen astonished everyone by flying at low level around some hangars. He met a crane, so he needed als his luck and flying experience to avoid the thing. During this show Frans van der Vijgh flew Meteor Y-32 (I-208), Manus Mulder flew Meteor Y9-18 (I-105 or I-127), Ron van Beers Meteor Y9-21 (I-116) and Tonnie de Bie Meteor Y9-33 (I-91). Leader Paul Verspoor and sergeant Paul Jansen flew with Meteor Y9-30 (I-202) and Meteor Y9-31 (I-201). Unfortunately it is not known who flew which Meteor.
The team returned to air base Leeuwarden on June 13.

Later in 1955 the team flew a display at air base Eelde. The team is not mentioned at later date in the squadron diaries, apparently this display was the last of this Meteor team.
The aircraft kept their display scheme for a while. 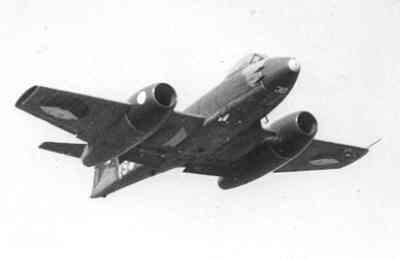 Gloster F.Mk.8 Meteor of the display team of 323 Sqn.
[Enclosed photo from BeeldBank NIMH. Click on photo for ordering information] 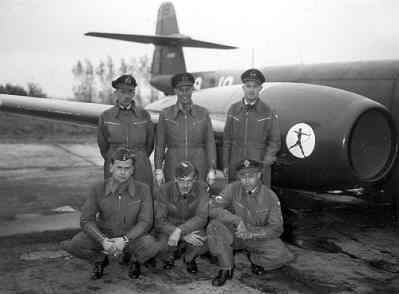 Members of the Gloster F.Mk.8 Meteor display team  323 Sqn at air base .
[Enclosed photo from BeeldBank NIMH. Click on photo for ordering information] 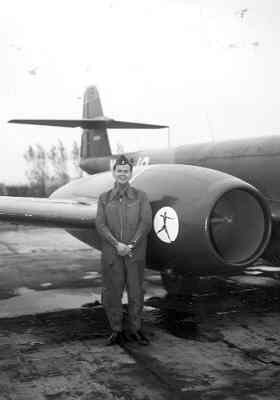 The Meteors were decorated with red wing-tips and nacelles.
The nose of the fuselage was already red, because the Meteor were used for shooting practises (during the fifties the task of 323 squadron was training of pilots and instructors).
On both nacelles in a great white circle the squadron badge, Diana, the Greek hunting Goddess was applied.
It is not known when this scheme was applied nor who initiated this scheme. Piet Miedema, on of the technical crew, had a photo taken before the ILSY display. perhaps the scheme was applied before the earlier display contest.
The aircraft kept their standard camouflage scheme of dark green and dark Sea grey on the upper surfaces and PRU Blue on the under surfaces.
The front of the nose, front of the tail cone and the top of the vertical stabilizer was painted in the colour of air base Leeuwarden, light blue.

For modelling information see also this article about the Gloster Meteor.

In the main 1/72nd scale the following models are released:

Rareplanes released many years ago a vacu formed scale model of the Meteor Mk.8.
As nowadays a very good injection moulded release is available, so no attention is payed to this release.

Merlin Models released a short run injection moulded scale model of the Meteor Mk. 8. I think many releases of Merlin are rather sad and expensive, this rare kit is not recommended.

Note the aircraft used by squadron 323 were equipped with the late tear drop canopies, revised ailerons and usually the enlarged air intakes.

PJ Productions released two kits of the Meteor Mk.8 in two different versions. At the Flanders Contest, march 1997 I saw these kits built. To be honest the models were very nice.

Several years ago the latest and thus far best Meteor Mk.8 scale model was released by ExtraKit and MPM. This kit was also released by Airfix. 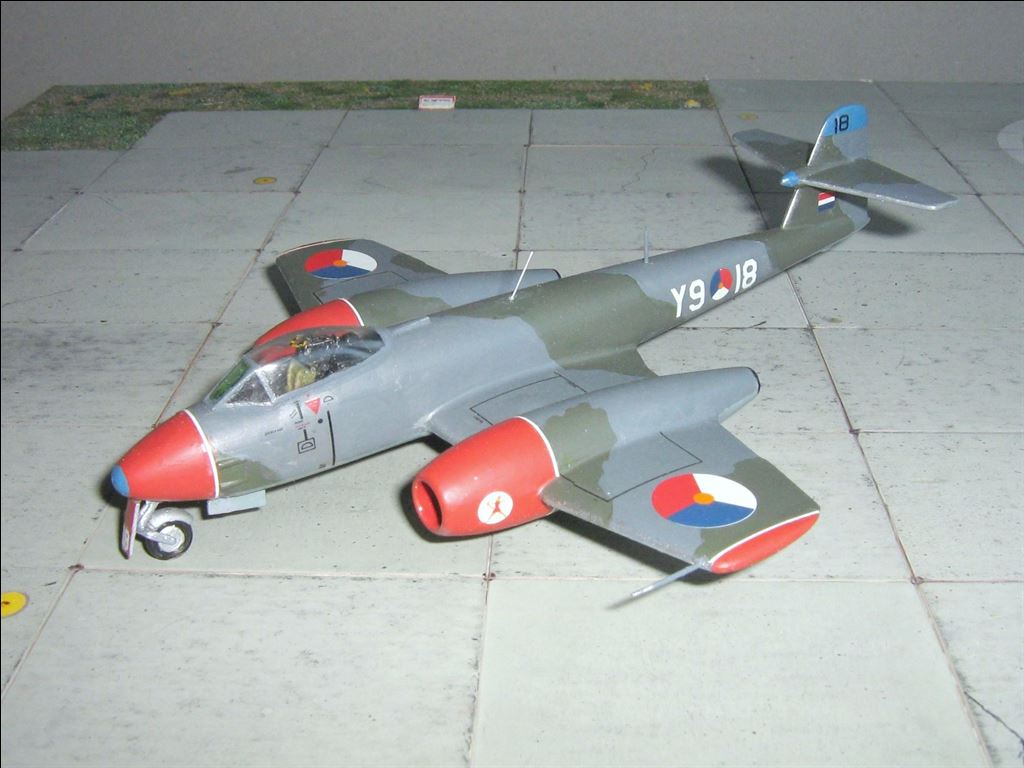 A model of a Gloster Meteor F.Mk. 8 of this team, built by Adri Kleijn.