August 1, 1956 a contest display flying was held at air base Soesterberg. In December 1955 the F-84F-check-out-team, consisting of captain Brey, 312 squadron, captain Van der Meulen Kunee, 311 squadron and captain Themmen, 311 squadron order from the commander Tactical Air force Maurenbrecher to form an aerobatic team, equipped with the F-84F Thunderstreak. Fourth man was flying officer Holsteyn, 312 squadron.
January 4, 1956 was the first training flight of the team.
In June the team changed as flying officer Holsteyn left the team. He was succeeded by flying officer Cosijn, 312 squadron.
The first official Display was flown july 14, 1956 at air base Leeuwarden, because of a parents day.
Two weeks later, august 1, the contest at air base Soesterberg was held. The aircraft were flown by leader captain Brey, captain Van der Meulen Kunee, flying officer Themmen and flying officer Cosijn. The aircraft were sprayed in a special paint scheme of red, white and blue.
The team reached a successful second place, with just a difference of one half point compared with the number one, the Hunter team from air base Leeuwarden.
Later in august 1956 a display was flown at air base Volkel because of a visit of Lieutenant-colonel Berlijn.
Late august 1956 captain Brey left military service. He was succeeded by flying officer Themmen as team leader. Flying officer Veenhuysen became the new second man of the team.
The renewed team flew a first display in October 1956 because of a parent day.

In 1957 there were again contests display flying, this time at air base Gilze-Rijen. And once again a team from air base Volkel was sent to this contest.
April 1957 training started with leader captain Themmen, flying officer Van de Schaft, captain Van der Meulen Kunee and flying officer Veenhuysen.
The aircraft used were bare metal. This time the aircraft were equipped with a smoke generator. A small oil tank was added just behind the canopy, a pipeline run from this tank to the tailpipe. It is not known when this modification was added.
May 29, 1957 prince Bernhard visited the airbase and a display was flown. The aircraft were overall bare metal and polished.
All serials and squadron codes were removed.
June 7, 1957 three Streaks of the team flew a show because of a parent day at air base Volkel.
The first display with smoke was at June 24, 1958. The Streaks used, had a red and white paint scheme.
The contest mentioned above was at august 24, 1957. Seven teams took part of this contest. Dash Four became fourth. The aircraft were flown leader captain Themmen, flying officer Groothoff, captain Van der Meulen Kunee and flying officer Veenhuysen. 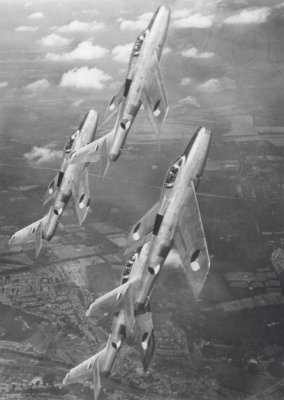 In 1958 the Royal Netherlands Air Force existed 45 years. An air show was planned on July 5 at air base Soester­berg.
The Dash Four team started training again in march 1958.
Several NATO members sent a display team to the Netherlands because of the championship display flying. Participants were USA, Belgium, Denmark, Greece, England, Portugal and Turkey.
The Dash Four won the national championship on June 24, 1958 at Volkel air base.
The Thunderstreaks were painted is a special red and white paint scheme. The aircraft were flown by leader captain Themmen, captain Van der Meulen Kunee, flying officer Groothoff and flying officer Veenhuysen.

The team also won the NATO championship on july 5 and was invited for World Congres of Flight, Las Vegas, April 12 till 19 April 1958.
Note: Just before the team left to the USA, they are on a photo before a bare metal Streak without any serial, so this should be at the end of 1958 of beginning of 1959.
March 22, 1959 the team departed to USA for the show at Las Vegas.
They used USAF Thunderstreaks, with serials 26945, 26962, 26971 and 26979. These aircraft were from an older batch with older less powerful engines, so some problems occurred during training at Luke AFB.
The team was for training stationed at Luke AFB until April 3, 1959. Later the team moved to Nellis AFB, Las Vegas.
April 9, Veenhuysen crashed with 26931. Two aircraft flown by Veenhuysen and Van der Meulen Kunee, hit each other. Veenhuysen needed to bail out, whereas Van der Meulen Kunee managed to land his heavily damaged aircraft.
April 12 and April 15 the team displayed with USAF Streaks. These were painted in a special scheme, consisting of an orange arrow and the blue DASH-FOUR badge on the front of the fuselage.
Also Dutch roundels were applied on the aircraft.

May 6, 1959 the team returned to the Netherlands. One of the crew already went home earlier.

June 19, 1959 a last display was flown at a parent day at air base Volkel. The aircraft used were standard Thunderstreaks.
Van der Meulen Kunee was replaced by flying officer Schreurs. Schreurs also flew with the Lockheed T-33 display team of 313 squadron, The Skysharks. The same day the Dash Four team was separated.

Further information about the Thunderstreaks of the Royal Netherlands Air Force, click here

The USAF Streaks used, were in standard USAF. Photos show the inscription "U.S. Air Force" apparently being removed or painted over in a very light grey colour.
On your model I think it's best being represented by painting this in light grey or matt aluminium.

The drawings shown don't show the standard aircraft stencilling.
See for the other paint schemes the drawings on this website.