Many of you will remember this display team of the Royal Netherlands Air Force.
They became well known when they acquired the official status as (Dutch) display team.
The Grasshopper team, equipped with the trusty Alouette III helicopter, performed in many air shows in Europe. The aircraft had an attractive red white and blue colour scheme applied.

The crew changed partially every year, so I decided not to mention the crew members in the history below.
A peak was a special TV show in 1995. This show was flown at the terrain of the "Westergasfabriek" at Amsterdam in cooperation with the Helicopter String Quartet of Karl-Heinz Stockhausen.

Shortly after this shown the team was disbanded because of the withdrawal of the Alouette III from operational service in 1995.

Below an overview of the most important periods of the Grasshopper team over the years.

Spring 1973 four pilots of 299 squadron decided to compile an air show because the sixtieth anniversary of the Royal Netherlands Air Force, celebrated at Deelen air force base.
Thus-far only performances of a single Alouette III were seen at air shows.
These four pilots were lieutenant Gert-Jan Sijtema; Lieutenant Menno van de Berg; 2nd lieutenant Jan Jansen and lieutenant Harry van Dam.
A problem with display flying and especially formation flying with the Alouette III were its instability and mainly the lack of a fixed target on the aircraft.
Lt. Sijtema designed the concept of the show and during the months preceding the anniversary show, the program was developing to its final form.

Of course much attention was paid to safety and rescue procedures. The figures generally derived their name from the pattern that emerged during the preparation on paper. A well known pattern was the ‘onion’.
The evening before the show large yellow rectangles were painted on both sides of the aircraft. On the underside of the fuselage a large yellow "G" was added, under the sliding doors the name of the team was visible in yellow lettering.
After the show the yellow paint was washed away. The serials of the aircraft were not visible.
See the drawing below for an impression of this first Grasshopper paint scheme.

The team stayed together, just Harry van Dam left and was succeeded by Flight Lieutenant Rik Spaan.
Further a fifth pilot was added as reserve, Flight Lieutenant Wil Korenhof.
The first official display was flown on June 5, 1974 at the "Dag van de Luchtmacht", at Duindigt. This time the aircraft had a special colour scheme applied.
Yellow, plastic stripes were attached to the fuselage.
Also an air show was flown at the Open Day at air base.
A request for an air show at Ahlhorn, Germany, was rejected by the Air Force Staff. The team was disbanded shortly afterwards. The aircraft used were: A-217; A-543; A-281; A-324; A-494.

An original photo of two aircraft of this year's display can be found at Thunderstreaks.com 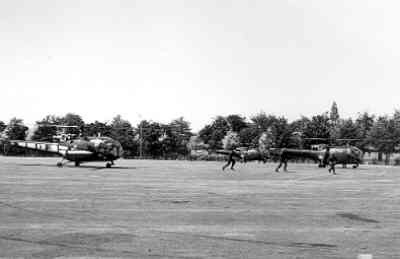 Alouette III, with the A-281 in Grasshopper scheme during exercise "Concreet". Dropping of intruders.
[Enclosed photo from BeeldBank NIMH. Click on photo for ordering information] 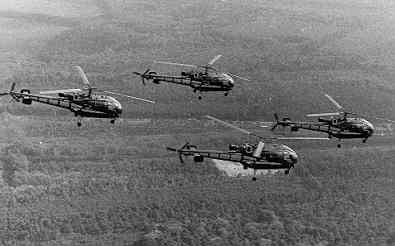 The show draw attention of the media, especial the TROS.
This broadcast association wanted to make a program about the team. The team gathered again and in February 1975 the recordings were made.
Alas the Air Force Staff did not give permission for a show.
After considerable lobbying on the staff the team was permitted to perform an air show at both Open Days at airbase Leeuwarden and Volkel respectively. No special colour scheme was applied.

In 1977 again a display was flown at the Open Day at air base Gilze-Rijen.
No special colour scheme was applied for this show.

Several shows were flown and also the first international performance was flown at USAFE-base Hahn, Germany.
The Alouettes had a special colour scheme with yellow stripes.
The name of the team was applied on the underside of the fuselage.

A nice photo of two examples in this Grasshopper scheme can also be found at Thunderstreaks.com 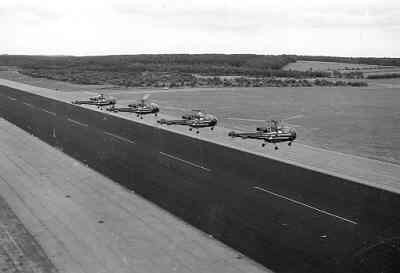 "Grasshoppers" over air base Deelen in 1978.
[Enclosed photo from BeeldBank NIMH. Click on photo for ordering information]

This year the team became the official display team of the Royal Netherlands Air Force.
A new colour scheme was applied, consisting of white slashes.
This scheme was nicknamed ‘zebra-scheme’.
An other important change was that all Alouettes were transferred from squadron 299 to squadron 300, also based at air force base Deelen.
For logistical reasons the 299 squadron was fully equipped with the Bo-105C.
Also an show was flown at Brasschaat, Belgium, because of the 25th anniversary of “Lichte Vliegwezen”. Aircraft used: A-246; A-390; A-451; A-465 and A-470. 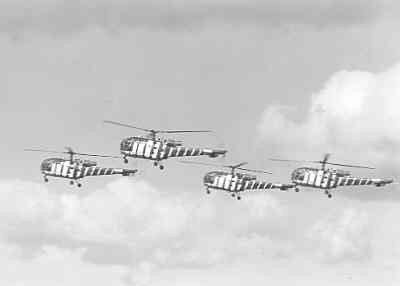 "Grasshoppers" formation, in the zebra scheme, during their show at air base Deelen in 1979.
[Enclosed photo from BeeldBank NIMH. Click on photo for ordering information] 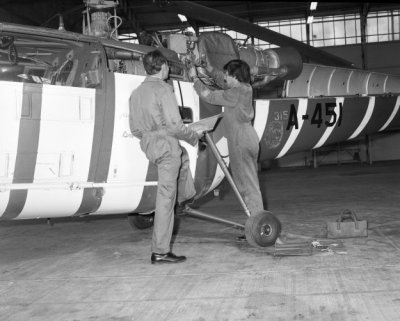 Alouette III, serial A-451 of the Grasshopper team, with the badge of squadron 315 applied.
[Enclosed photo from BeeldBank NIMH. Click on photo for ordering information]

This year a brand new paint scheme was applied to the aircraft, the well known red, white and blue colour scheme. This scheme was used till the last show of the team in 1995.
Further the team received two spare aircraft, which also had the colourful paint scheme applied.
A first show should be flown at the International Air Tattoo, Greenham Common, but due to some misunderstanding this show wasn't flown.

Colour scheme Grasshopper team 1980 and on. 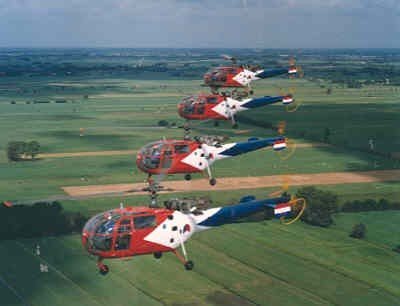 "Grasshoppers" team at air base Deelen in 1980.
[Enclosed photo from BeeldBank NIMH. Click on photo for ordering information]

This year an air show at the famous IAT at Greenham Common was flown. This show was very good, so the team received the UK Shell Oil Trophy for best air show.
Much attention was for the Public Relations of the team. A small van was used, so the team could sell the leaflets, stickers and the like.

For the first time smoke generators were used to make an attractive show. 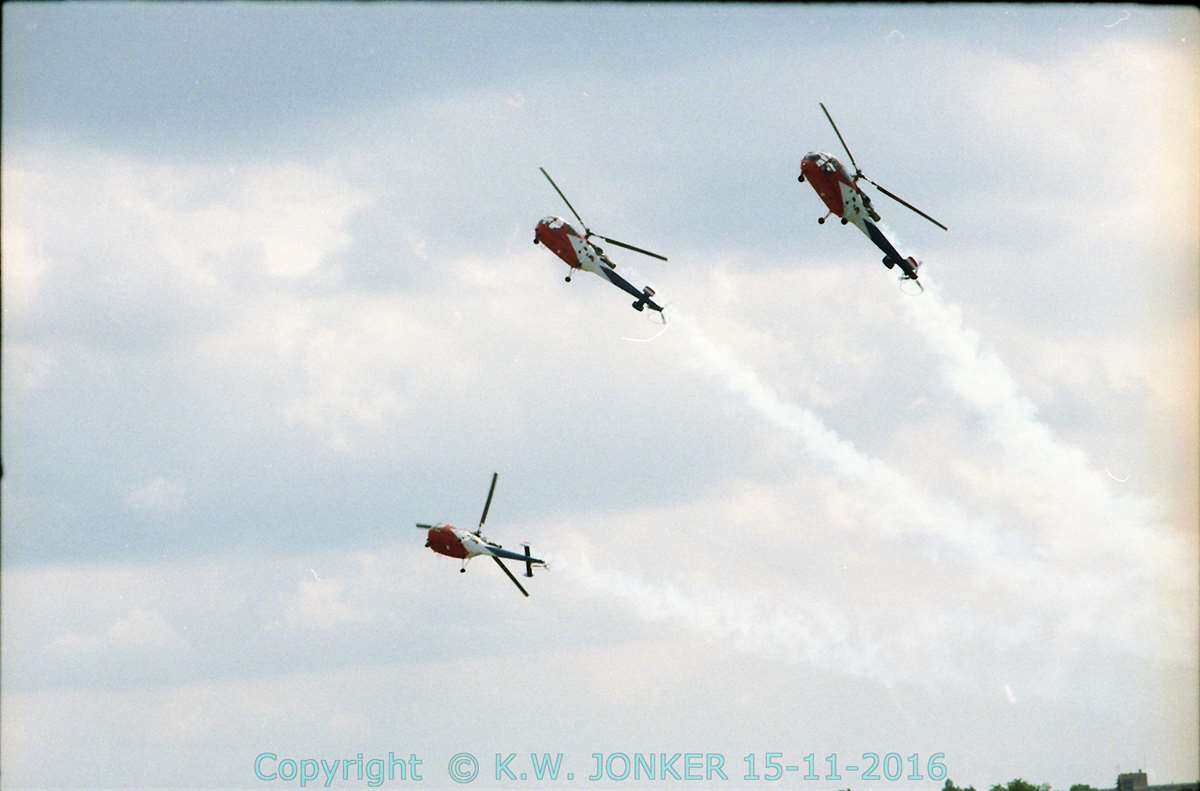 The Grasshoppers at the Open Day at air base Soesterberg September 1984. 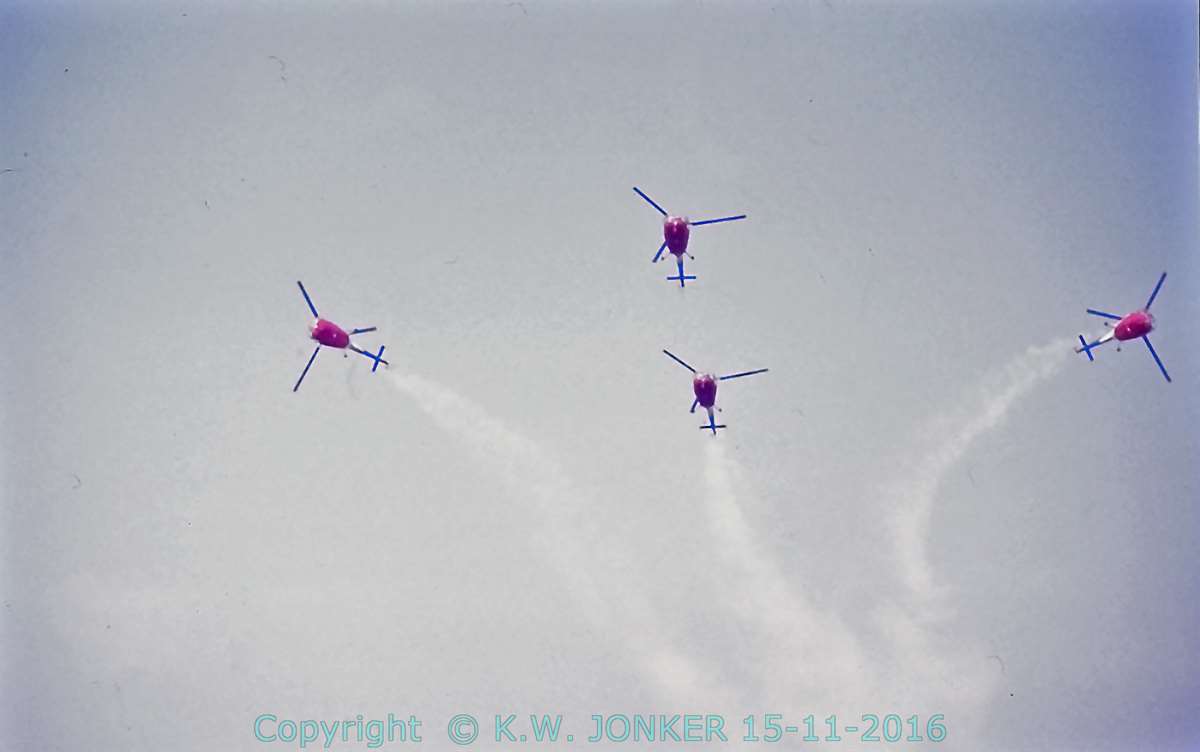 The Grasshoppers at the Open Day at air baase Twenthe, July 1987.

This year the RNlAF celebrated its 75th anniversary. The official "KLu 75" logo was applied on the tail.

Below the show at Deelen air base. 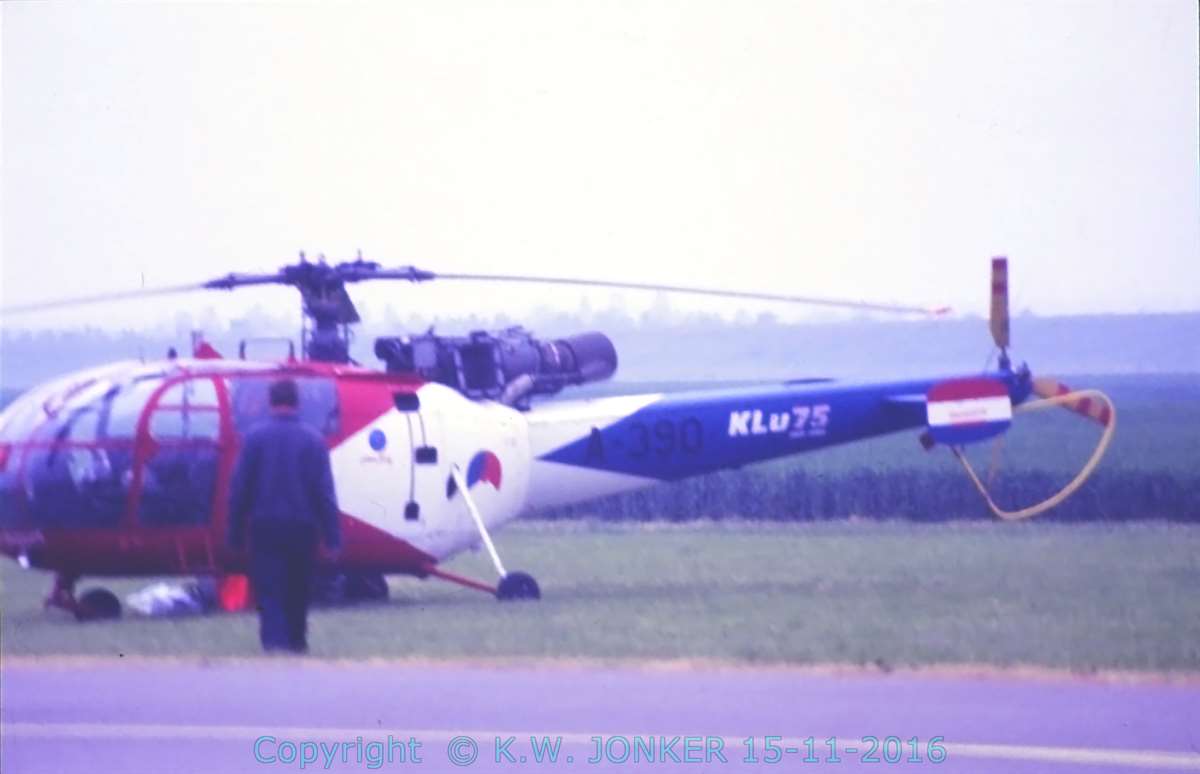 Grasshopper Alouette A-390 with KLu 75 markings at the Lelystad Airshow at airfield Lelystad, May 1988. 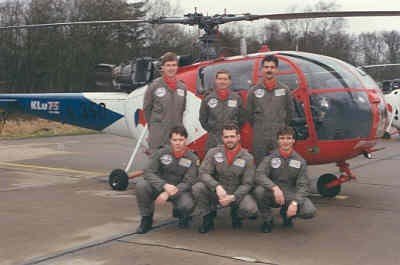 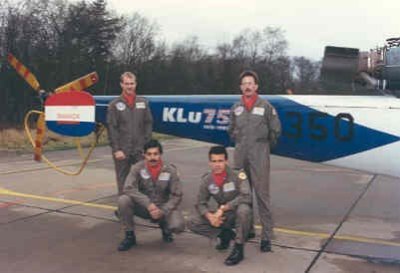 The Grasshopper-team was officially disbanded on Augustus 8, 1995 due to depreciation of the Alouette.

The first series of Alouettes were delivered in overall Dark green (donkergroen mat 19), the second series were overall RAL 6014.
The serials were applied in white. Later, when the Bo-105 was introduced in 1975 and 1976, the white serials were replaced with black ones, which are less visible.
Early eighties the camouflage of the Alouettes was changed, but the Grasshopper team kept using the well known red, white and blue aircraft.