During 1956 captain C.A.M. Poublon, squadron 314 raised a Thunderjet-team. Soon the Thunderjets were replaced with the Republic Thunderstreak. Other members were lieutenant Hans de Jong; lieutenant . R. De Koning and ensign Hans (Red) Verdonk.
Poublon had already joined a Thunderjet-team during 1952/1953. This team flew a display July 18, 1953 at Soesterberg, because of the 40th anniversary of the Royal Netherlands Air Force. This show was of such good quality, that it stated that it could be compared with the famous USAFE-Thunderjet-team ‘The Sky Blazers’.
Training for the show of the Red Noses was done besides the usual training program of the pilots.
The show contained parts like: take-off in box formations, than a echelon-right formation an a right turn and a roll in box formation. The show ended with a spectacular downward bomb burst!

In 1957 the team joined the national championship formation flight of the Royal Netherlands Air Force. The team ended up as last. In august, 1957 a final show was flown at the "Gouden ILSY" (ILSY = Internationale Luchtvaart Show Ypenburg = International Air Show Ypenburg).
The memorials of squadron 314 mention an attempt to adjust smoke generators. Chief Armament P. Koning developed these from two rockets. These were attached and secured with steel-wire. the smoke of the propulsion of these rockets would take care for the smoke trails. The first tests were unsuccessful. Both rockets got loose and disappeared.
No further information is known about this display team. 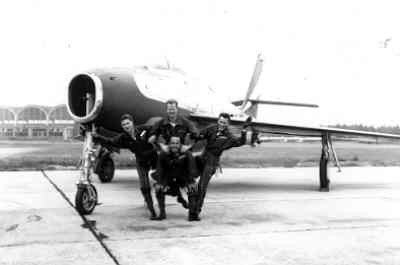 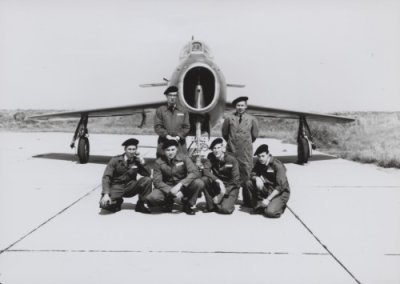 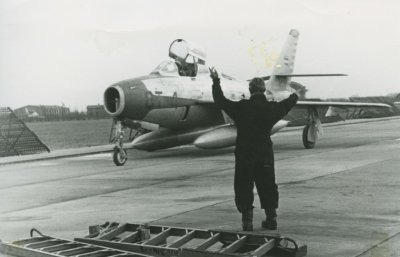 A F-84F of 314 Sqn at Eindhoven. Regarding its paint scheme this particular aircraft might be part of the display team "Red Noses".
[Enclosed photo from BeeldBank NIMH. Click on photo for ordering information]

The first years the Dutch Thunderstreaks were 'bare metal". Soon problems with corrosion occurred, so halfway the fifties the undersides of the aircraft were sprayed with aluminium varnish. The aircraft of the Red Noses team were probably original bare metal.
On all Dutch F-84F's the standard ‘NATO’ aircraft stencilling was applied.

The aircraft of the Red Noses team were provided with a special colour scheme. Probably applied because of the Championship or because of the ILSY. I managed to find just very few photo's, all seem to be the result of one photo session, because both technical crew and the team members are posing in front of one of the aircraft.
The tail was probable painted in red, white and blue. The nose was red, flushing towards the wings. The leading edge was also painted red with a small white frame.
The drawing shows how the aircraft might have looked like.

Further information about this display team would be appreciated.