The Avenger was designed to succeed the TBD Devastator. This aircraft entered service in 1937 in an amount of about 130 examples.
This slow aircraft lacked armouring and self sealing fuel tanks and proved to be vulnerable during the Battle of Midway.
In 1939 the US NAVY had set up a list of demands for a new torpedo bomber. These demands resulted in Vought's XTBU-1 SeaWolf and the Grumman XTBF-1. Also because the TBF-1 was sooner available after evaluation of both prototypes, an order of 286 TBF-1 was made.
The design of the TBF was based upon the Grumman F4F Wildcat. Initially a Wright R-2600-8 rated 1700 hp was used, but this configuration proofed to be under powered.
Wright succeeded in raising the power of the this engine up to 1900 hp of the Wright R2600-20. Further Grumman attempted to lower the weight of the Avenger.
Another problem was the turret. A suitable turret proofed to be unavailable, so Grumman designed an own turret with one single .50 machine gun. Also a .30 machine gun in the radio compartment under the fuselage and one single fixed, forward firing .30 machine gun was available.
These .30 machine guns proofed to be insufficient and were replaced from the TBF-1C with two .50 machine guns, mounted in the wings.
January 1942 delivery of the TBF started and by the end of the year 64 Avengers were delivered. Several aircraft were delivered to the English Fleet Air Army, initially designated as TBF-1B. The English named the TBF-1B Tarpon I. This model differed mainly in the two blisters on both sides of the fuselage just behind the wings.
Because of the increasing demand for aircraft and Grumman was ordered to focus upon the production of the Grumman F6F Wildcat, production of the Avenger was handed over to General Motors, Eastern Aircraft Division by the end of 1942. The US Navy had designated code letter “M” to this factory, Grumman had code F”. GM delivered their first TBM-1 in November 1942.

TBF-1C/TBM-1C:
This model was first delivered in 1943 and differed in having the single nose mounted .30 machine gun iin the nose with two .50 wing mounted machine guns. Other changes were the movement of the antenna more backwards. The second seat ware abandoned and replaced with radio equipment, also IFF equipment was added. Weight increased with approximately 225 kg, while the engine was the same Wright Cyclone R-2600-8 rated 1700 hp. Over 300 examples were delivered to the English as Tarpon II.
TBF-1D/TBM-1D:
This model was developed as an night version, existing TBF/TBM-1C’s were modified and equipped with a pod, containing ASD-1 radar. This pod was installed under the right wing. In order to save weight the machine guns were removed.
TBM-3:
As mentioned above the Avenger was in fact to large and to heavy for the Wright R-2600-8 engine. Often problems during take off occurred, while the aircraft had a full load. Grumman had tried to obtain the more powerful Wright Cyclone R-2800, which was rated 2000 hp, but all engines produced were for the Hellcat, Corsair and Thunderbolt.
Wright succeeded to develop a more powerful version of the R-2600.
May 1942 a prototype XTBF-2, a modified TBF-1 with a Wright Cyclone R-2600-10 and two other modified TBF-1’s with designation TBF-3 equipped with Wright Cyclone R-2600-20. Both engines were rated about 1900 hp. In the end it was decided to take TBF-3 in production. As GM was now producing all Avengers, this model received the designation TBM-3.
Other modifications were extra cowling flaps and an oil cowling. Internally the instrument panel was enlarged and more flattened at the top. Under the wings it was possible to ad four ‘zero-length’ rocket brackets. This model entered service in the Fleet Air Air as Tarpon III. Sub version were TBM-3P, a photo reconnaissance aircraft; TBM-3J to be used in the polar area; the TBM-3L equipped with a retractable search light and the TBM-3H, a special radar version
TBM-3D:
This model was a modified TBM-3 and equipped with ASD-1 radar in a wing mounted pod.. This pod was mounted in the front of the right wing. Also the armament in the wings was removed.
TBM-3E:
This model was developed to improve the performance of the heavy Avenger. The Wright Cyclone R-2600-20 could not be further improved and uprated, so research was done in order to reduce weight. A reduction of 1150 kg was achieved, by removing the gun of the radio compartment.
While this model was in production an other modification was applied. The internal arrestor hook, which was suffering corrosion, was replaced with an external one. Also a APS-4 radar in a pod under the right wing could be added.
TBM-3W:
During World war 2 the radar of the ships was unable to detect aircraft which flew below 150 m and closer than 35 km. The only solution was to move the radar to a higher location, so a good solution was to use an airborne radar system. Thanks to the development of the air borne APS-20 radar, the problem could be solved.
A TBM-3 was equipped with this radar; the machine guns were removed; the bomb compartment housed the radar equipment; the antenna was added in a radome under the fuselage; the turret was removed; radar and radio equipment was added. Also two stabilization fins were added. The first examples, XTBM-3W, made its maiden flight in august 1944.
Forty TBM-3’s were modified and early 1945 operational training started. The war ended before the TBM-3W entered operational use. The modified aircraft entered service though, because the proved to be sufficient AEW aircraft.
When the TBM-3S was developed both types were used as e team in anti submarine warfare.
TBM-3S:
This model was developed because of the thread of the Soviet submarines.
Several TBM-3E’s were equipped with new electronic equipment and armament. The turret was removed and replaced was a compartment for the radar operator and parts of the canopy were covered; oxygen equipment was removed, as would be operated on lower altitudes.
An antenna was added in order to communicate with the datalink system of the TBM-3W. As offensive armament depth bombs and acoustic torpedoes could be carried.
A special version for the English was equipped with a small radar radome under the fuselage as AS-4. The TBM-3S was exported under MDAP conditions to Canada, France and the Netherlands. The canopies of these export versions differed from each other.


The RNlNAS received a total of 78 Avengers in three versions, to know 34 TBM-3S2; 24 TBM-3W2 and 20 TMB-3E/TMB-3E2. This were improved versions of the original models.
The S and W-types were the main part of the anti submarine warfare and based on the "Karel Doorman".
The TBM-3W2 was equipped with APS-20 radar.
For nightly operations the TBM-3S was equipped with a search light. Four depth bombs could be carried; further up to six sono buoys could be carried under the wing. The receiver had a retractable antenna with a length of 1.20 m. Also markers, smoke bombs, and rockets could be carried.
In 1951 the first crew were trained in the US.The first TBM-3Ws arrived in august 1953.
Due to lack of spare parts and testing equipment it was not possible to use the aircraft operational.
Also the TBM-3S-toestellen were unavailable, these were delivered in 1954.

VSQ 4 was the first squadron to receive, albeit temporarily the TBM-3W Avenger. It was based for a while aboard the "Doorman", later it was based for training purposes at air base Valkenburg.
September 1954 also squadron 2 was operational and embarked on the "Karel Doorman" in January 1955.
During 1955 the squadron was detached at the British carrier “Bulwark”, because of an overhaul and modification program of the Dutch carrier "Karel Doorman"
From October 1955 both Avenger squadrons were based on air base Valkenburg. Every now and than an exchange occurred with other NATO air bases.

To enlarge the number of Avengers, ten TBM-3E's and ten TBM-3E2's were received from the Royal Navy. These aircraft were delivered in the period January - March 1958. Four aircraft, serials U-27 till U-30, were used for spare parts and are never used.
The TBM-3's were used by all three Avenger squadrons and some were used for training purposes on the "Karel Doorman".
In 1957 squadron 1 received five TBM-3S and three TBM-3W, in 1958 four TBM-3E’s were added. The squadron used also two Harvards for instrumental training.

During 1960 the Avenger was replaced with S-2F Tracker.

Below an overview of Avenger models available in 1/72nd scale. Most of the more or less reviewing information I have derived from Detail & Scale.

The canopy of the TBM-3S of the RNlNAS is of the same type which was in use by the US Navy. 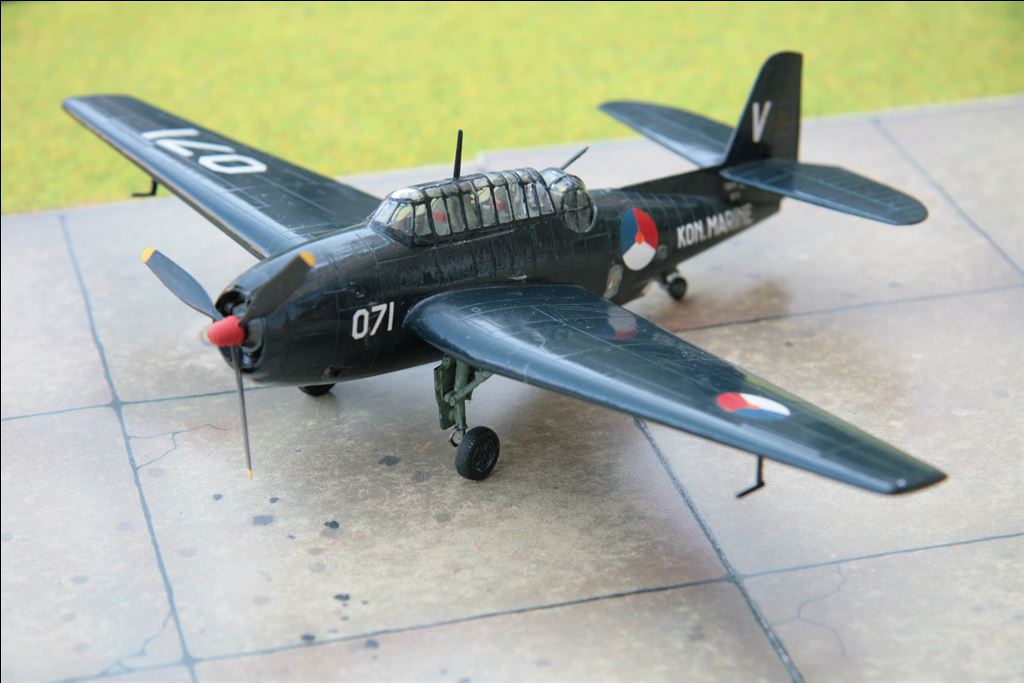 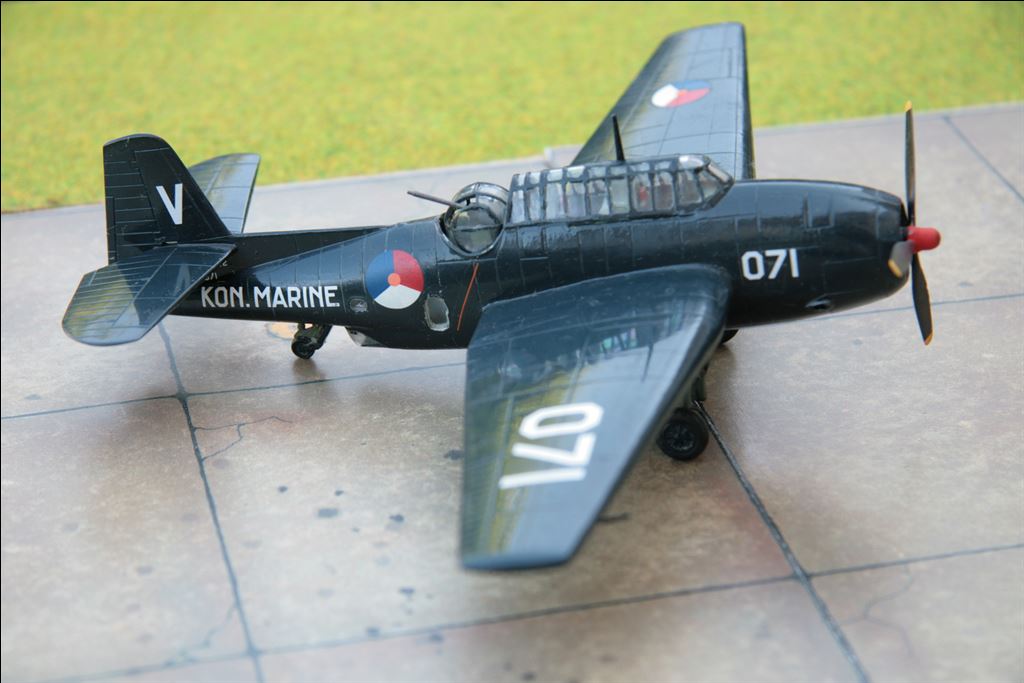 Model of a Grumman TBM-3E Avenger, built by Peter Banis. 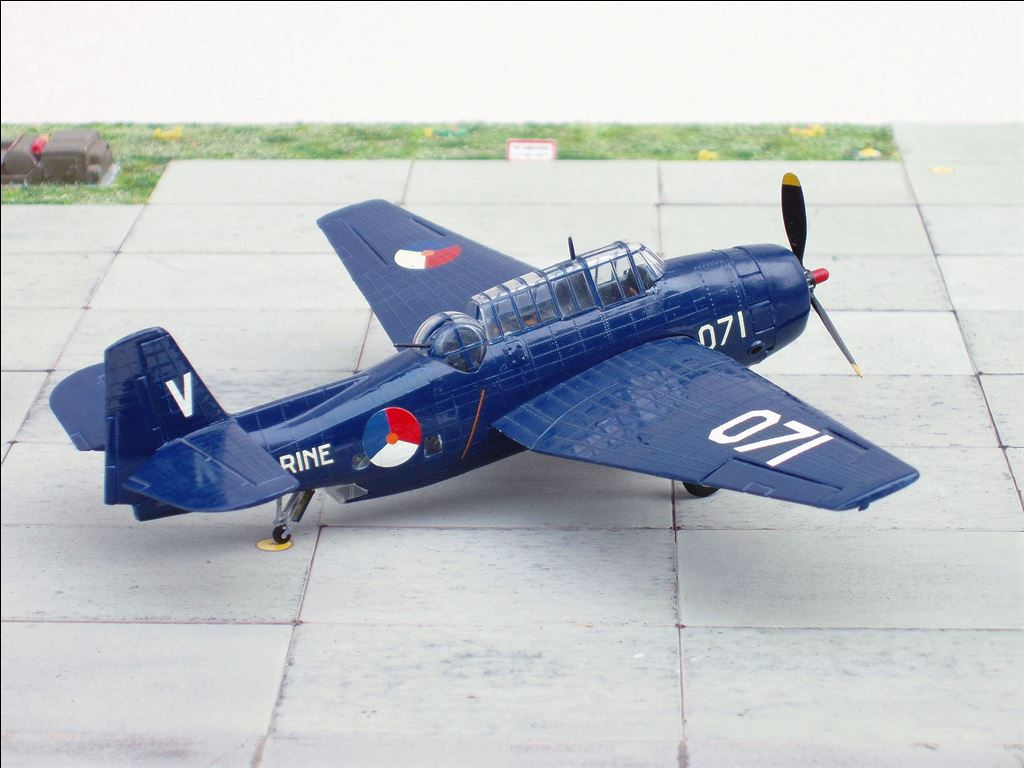 Model of a Grumman TBM-3E Avenger, built by Adri Kleijn. 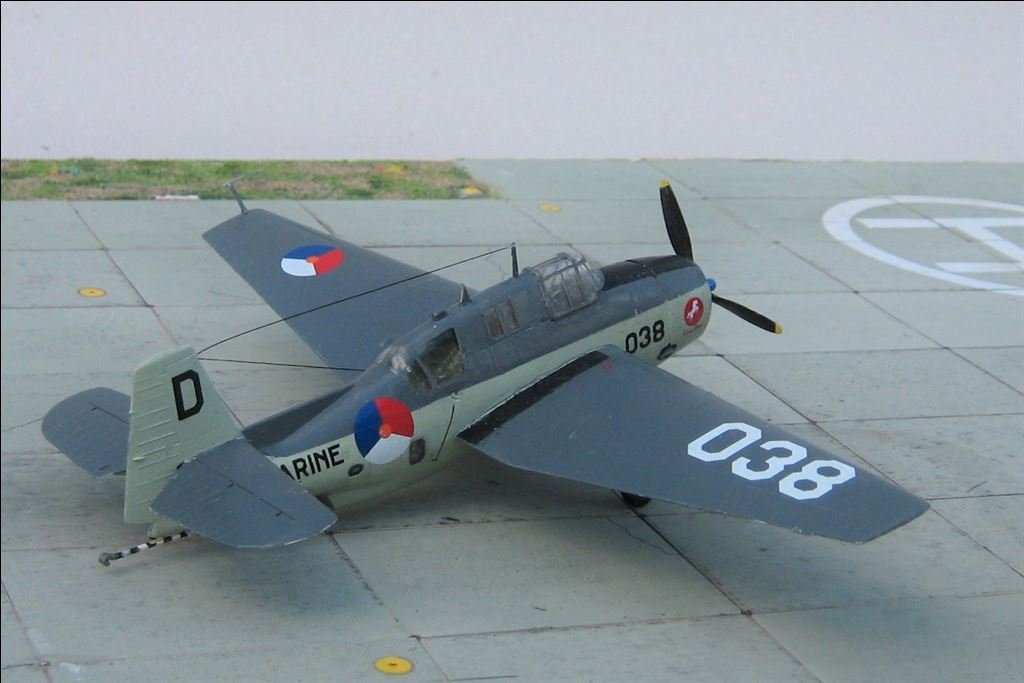 Model of a Grumman TBM-3S2 Avenger, built by Adri Kleijn. 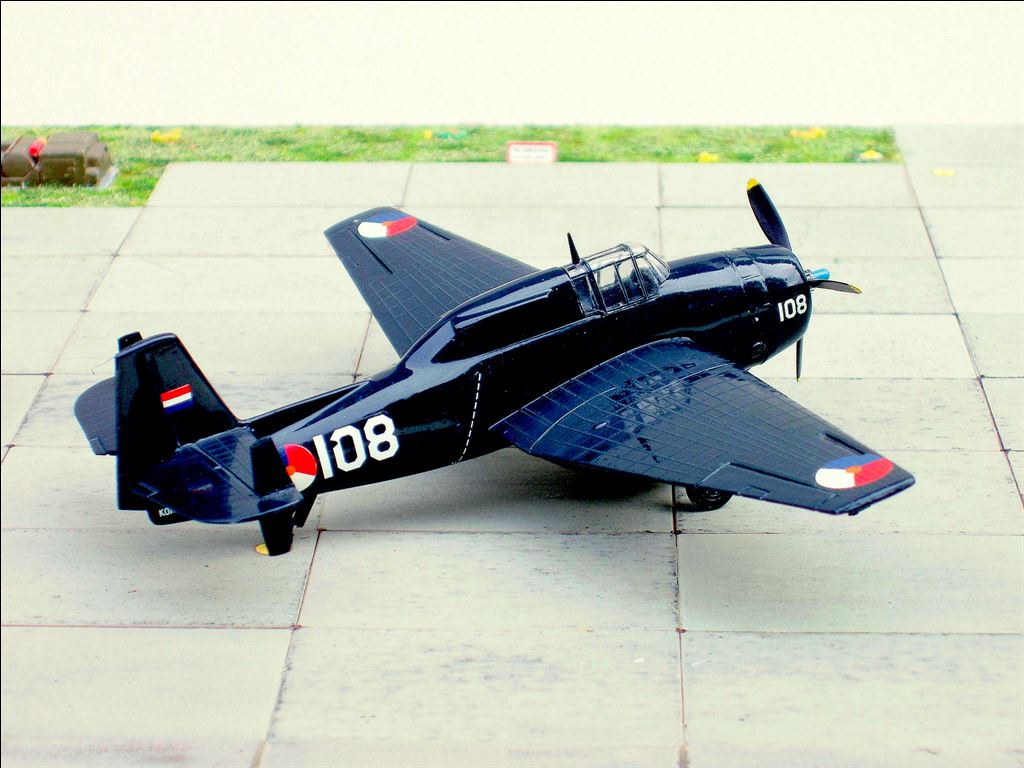 Model of a Grumman TBM-3W2 Avenger, built by Adri Kleijn. 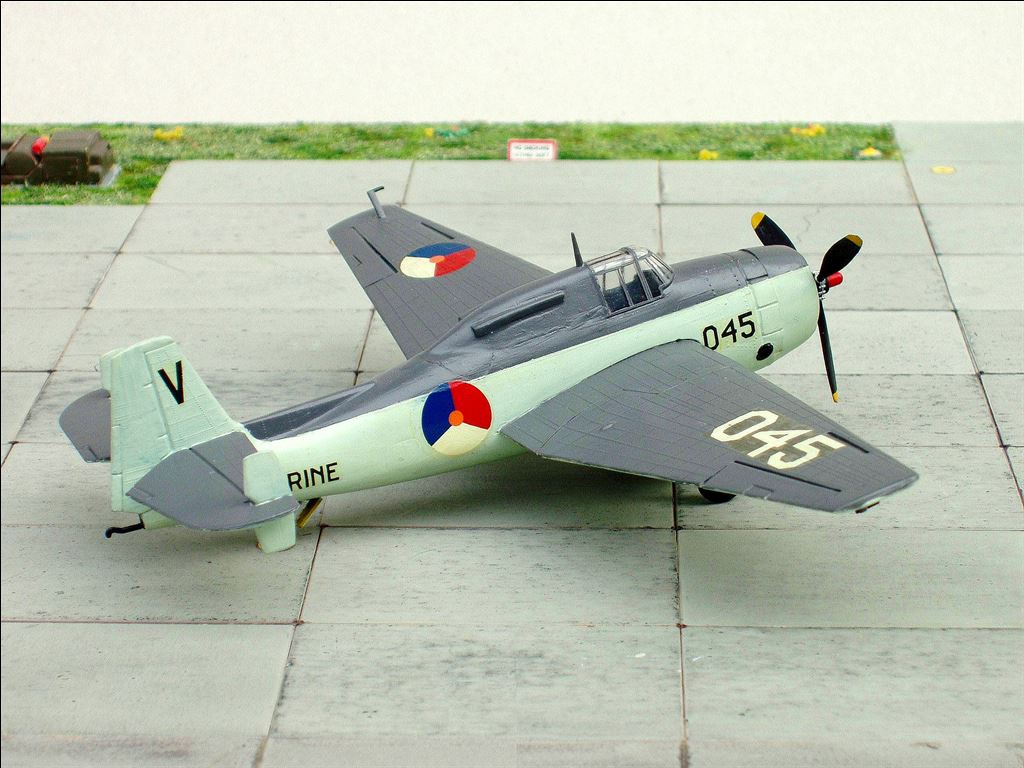 Model of a Grumman TBM-3W2 Avenger, built by Adri Kleijn.


At delivery al aircraft were overall MidNight Blue with white serials.
The spinner was applied with the colour of the squadron, squadron 2 Red; squadron 4, blue and squadron 1, white.
The roundels were applied in six positions and a fin flash on the vertical stabilizer. The aircraft number was also applied on the cowling.

After an complete overhaul, end of the fifties the Avengers TBM-3S and TBM-3W were sprayed in a new two tone colour scheme with dark grey upper surfaces and sky lower surfaces.

Serials were applied in black and repeated on de left underside of the wing and on the front of the fuselage between the wing and the cowling.

The first colour scheme of the Grumman TBM-3E Avenger.

The second colour scheme of the Grumman TBM-3E Avenger.

The first colour scheme of the Grumman TBM-3S Avenger.

The second colour scheme of the Grumman TBM-3S Avenger.

The third colour scheme of the Grumman TBM-3S Avenger.

The first colour scheme of the Grumman TBM-3W Avenger.

The second colour scheme of the Grumman TBM-3W Avenger.

The third colour scheme of the Grumman TBM-3W Avenger.

Special thanks to  J. Visschedijk for corrections regarding the serial overview.