Like the MB during the 1920s and early thirties of the twentieth century the Martin B-10 series set standard for land bombers. The design was the first successful military application of the new airframe technology and had a streamlined monocoque fuselage, propellers with variable pitch adjustment, thick metal wings with lift enhancing flaps, integral fuel tanks and a retractable landing gear.

The B-10 was designed in response to an Air Corps bomber specification from late 1929. Besides Martin also Fokker, Keystone, Douglas, Ford and Boeing, presented a design or prototype.

The first Martin's proposal for a conventional biplane was rejected by the USAAC Equipment Division with a range of suggestions for improvement. In February 1932 Martin built for his own account, a new model of the 123 with two Wright R-1820 Cyclone engines. It had a speed of 317 km/h (197 mph), which was faster than competing aircraft. With the designation XB-907, the prototype was tested on Wright Field.

Several problems occurred, such as vibrations from the engines, instability during flight and furthermore the landing speed was too high; this turned out to be 146 km/hr (91 mph). So it was sent back to the Martin factory with a list of suggestions for improvement.

Partly due to the impact of the stock market crash of 1929 the design had now become vital for the survival of the Martin factory. Martin went to work on the results of the tests to improves the Martin 123.

The landing gear was changed and a new nose turret was developed.

In October 1932, the XB-907A was ready. The device was not only faster than the competing Boeing XB-9 and Douglas XB-7, but was also just as fast as the latest fighter aircraft of the USAAC from that time.

Seven YB-12s were to be built for testing with Pratt & Whitney R-1690 Hornet engines, followed by 25 ordinary B-12A with the same engines, but equipped with extra fuel tanks and floating chambers and finally an experimental XB-14 with new Pratt & Whitney R-1830 Twin Wasps.

The YB-10 and YB-12 were delivered in early 1934 and were soon deployed for an unusual mission. All airmail contracts were cancelled due to corruption, and airmail now had to be taken care of by the USAAC.

The large, fast aircraft proved to be a godsend because of their reliability and security.

After these successes, Martin was actually expecting more large orders. Despite discussions Martin received contracts for 103 aircraft, in the final B-10B version with Wright R-1820/33 engines, spread over fiscal years 1934 and 1935.

The B-10's did service in every bombardment group of the Air Corps. In 1935 some were used for tests of Norden precision bomb sights.

The success stimulated the development of larger, long-range bombers which would replace the B-10, especially the Boeing B-17 Flying Fortress.

Already in 1936the USAAC lost interest in B-10 bomber. A few were tested as attack and observation plane, referred to as A-15 and D-45.

Despite a number of disputes with Martin about the design and occurring construction defects in the B-10 series, in the spring of 1940, yet 119 of the 151 aircraft were still in service. Most were used as target tugs, and for training as a B-10M and B-12AM, though seventeen aircraft were still in operational service in the Philippines.

In 1936, the Martin 139 was released for export and 189 aircraft were eventually sold abroad.

The Soviets were in the summer of 1936, the first with the purchase of a single copy and blueprints, soon followed by the Netherlands East Indies, China, Siam, Argentina and Turkey with various orders.

The Dutch were the best customers with the purchase of a total of 120 aircraft in four different versions for the defence of the Dutch East Indies.

Foreign orders for Model 139 Martin kept the factory busy until 1939. One of the Argentine Martins is the only survivor of the type and was completely restored in the pre-war Air Corps colours and can be seen in the Air Force Museum at Wright-Patterson Air Force Base.


In the mid thirties of the twentieth century several ideas were circulating about the defence and the rather young air force. One of these ideas was that an attack with bombers was the best way to defend.
The staff of the NEIAF supported this idea and asked several aircraft factories for an offer.
Fokker offered the Fokker T-V, which was still in development at that time. The American Martin company offered model 139, a version of the all metal Martin B-10. The B-10 was faster than the fighters in operational use at that time.
Finally the Martin 139 was selected and a series of 13 examples was ordered under the designation WH-1 as a replacement of the old Fokker C.V. [WH means Wright-Holland]

The planning foresaw the delivery of 39 aircraft, to be built under license in the Netherlands. Due to shortage of building capabilities it was decided to have the aircraft being built by the Martin aircraft factory. March 1937 a second series of 26 aircraft under the designation WH-2 was ordered.

The second series was improved in several ways: more powerful Wright Cyclone G-3 engines rated 875 hp each., the Hamilton Standard–propeller with two positions was replaced with a Curtiss Electric ‘constant speed’ propeller. Furthermore the cowling was improved and more streamlined, a NSF VR-34B radio and also an auto-pilot was added.
The maximum speed was about 40 km/hr higher, the range was enlarged with about 10 % and the bomb load was about 20 % larger.
The first WH-2, serial M-514, construction nr. 717 was handed over in December 1937. All WH-2's were delivered in October 1938, so three divisions each with thirteen bombers (two spare, two in maintenance and nine operational) were operational.

The Martin 139 was developed to the Martin 166. This model had one single canopy, the cross section of the fuselage was enlarged, so more bombs could carried. The wings were slightly oblique backwards and the engines were replaced with the more powerful Wright Cyclone GR-1820-G5 rated 1000 hp each. For commercial reasons this model was called Glenn Martin 139 WH-3.

November the same year a fourth contract was singed for the delivery of 40 Wh-3A’s. This type was identical to the WH-3, except that it was equipped with two Wright Cyclone R1820-G102 engines rated 1200 pk each.

The first WH-3A, serial M-579, construction nr. 837 was handed over in December 1938. April 1939 the third and last bomber division, VlG-III was operational at air base Tjililitan.

When the Japanese attacked the Dutch East Indies the following units were operational:

At the end of November 1941 so still operational:

The first actions with the Martins were in the Borneo area. The Japanese were eager to conquer the oil fields. Soon the day light attacks were very hazardous. Alas the crews were hardly trained in night attacks.
During the three months of war many aircraft were lost in action.
(Via P. Guit) B.Guit flew with pilot officer Yland on Martin M-611. This aircraft was shot down on January 24, 1942 during the landing on Samarinda II together with two other aircraft. They came from Singosari (Singorasi as mentioned is not correct spelled). On January 25, 1942 they were evacuated in a Lodestar with a total of 30 men to Java , because not enough aircraft were available at Samarinda II.
By the end of February one succeeded to fly with the only Martin, M-585, left to Broome, Australia. The Martin was handed over to the USAF, which used it registered 42-68358.
The other aircraft probably eighteen examples were captured by the Japanese. Fifteen aircraft could be repaired to airworthy condition and several were handed over to Thailand. Thailand had bought six Martin 139’s in 1937. After the war about five Martins were left, which were in use until 1949. 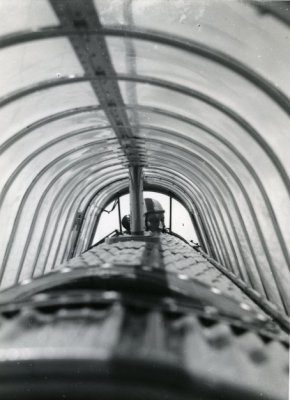 Luitenant-vlieger P.G. Tideman (1933-1985) looking over his shoulder to the airgunner- co-pilot behind him in a Glenn Martin 139 WH-3 bomber.
[Enclosed photo from BeeldBank NIMH. Click on photo for ordering information]

An explanation of the registration system used: The NEIAF used a system in which the letter was a code for the aircraft factory and the first number referred to the purpose of the aircraft.
So M meant Martin and "5" meant bomber. The other numbers were in fact the aircraft number.

The serials were applied in white on the sides of the fuselage and the numbers were applied, in black on the front of the wing.

At delivery the aircraft were in standard USAAC colour scheme of a blue fuselage, Light Blue Shade 23, and yellow wings and tail units, Yellow Shade 4. The rudder was in red, white and blue, but painted over in 1939. It is unlikely that this colour scheme had also the orange triangle applied, which were in use from the second half of 1939.

During 1940 all remaining aircraft were sprayed in Olive Drab, Shade 41 (called "Old Blad" (old leave)); the under side was sprayed with aluminium dope. Also the Dutch roundels were replaced with the orange triangles in four positions, not on the undersides of the wings! Initially the rudder was also painted orange, but soon the rudder was painted in Olive Drab. Uncertain is whether the triangles were reduced in size like the RNlNAS did. I haven't seen any photo's of this.

During 1941 several Martins had a two tone camouflage pattern applied on the upper surfaces of the wings, colours used were "Oud Blad" and "Jong Blad" (Olive Drab, shade 41 and Medium Green, shade 42).

February 1942 the remaining aircraft had the triangles replaced with the Dutch flag.

Third colour scheme Martin 139 WH-2: A pattern of 'Jong Blad' and 'Oud Blad' on upper surfacess and bare metal on lower surfaces.
As a source for this scheme I used the scheme published by Peter C. Boer on "Mars et historia" .

Special thanks to mr M.T.A. Schep en M. Schonfeld for their information regarding the differences of the various types.