The Airfix, Matchbox and the old Frog/Novo-models are not recommended to built a good model of the Mitchell. To built a accurate 1/72nd scale model of the B-25C/D version, you can use the Italeri kits. Hasegawa released a very nice and accurate kit of the B-25J version in 2004.

In order to built an B-25C/D, based on the Italeri kit, of no 18 squadron NEI, the window just behind the canopy (part no 12) need to be reduced to half its size. The corners must be more rounded. Also this windows was somewhat bulgy (according to the photos of the real aircraft).

The windows, part 21, were, as far as i could see on photos, not present on the first C models. Also the oval windows (the parts just near part 12 in the frame of the kit) were present on the early C-versions.

The blister, part no 20, just aft the cockpit, was not present on the early C-models.

Later the aircraft had an extra fixed .50 inch machine gun added to the nose, so two fixed plus one movable machine gun were present. The kit has just on single machine gun, so check your scrap box or buy the guns in an accessory kit.

The B-25D-20 and later had additional gun packs added plus two machine guns pointing out of the windows just behind the wings. These windows are the same as used on the B-25J. Note that the location of these windows was identical!

Also these aircraft had an addition gun in the tail. A housing was added, note that this housing had a different shape than the housing of the B-25H and B-25J models, see the drawing added.
The Italeri PBJ-1D has a housing added with a tail gun, but this has a different shape and cannot be used for this version of the Mitchell.
What can be used from this kit are both gunpacks (parts 21 and 22). I think these packs might be some thicker. [By the way all parts for an ordinary B-25C are still with this kit]

See this photo for a good impression of this blister. Note these blisters were slightly different from the blisters used on the first modified strafers!

The J-version was usually fitted with two fixed machine guns plus one moveable machine gun in the nose. The kit has only one fixed gun available.

For all models you'll need to put an amount of extra weight in the front of the fuselage, to have model stand nice and easy on its landing gear. 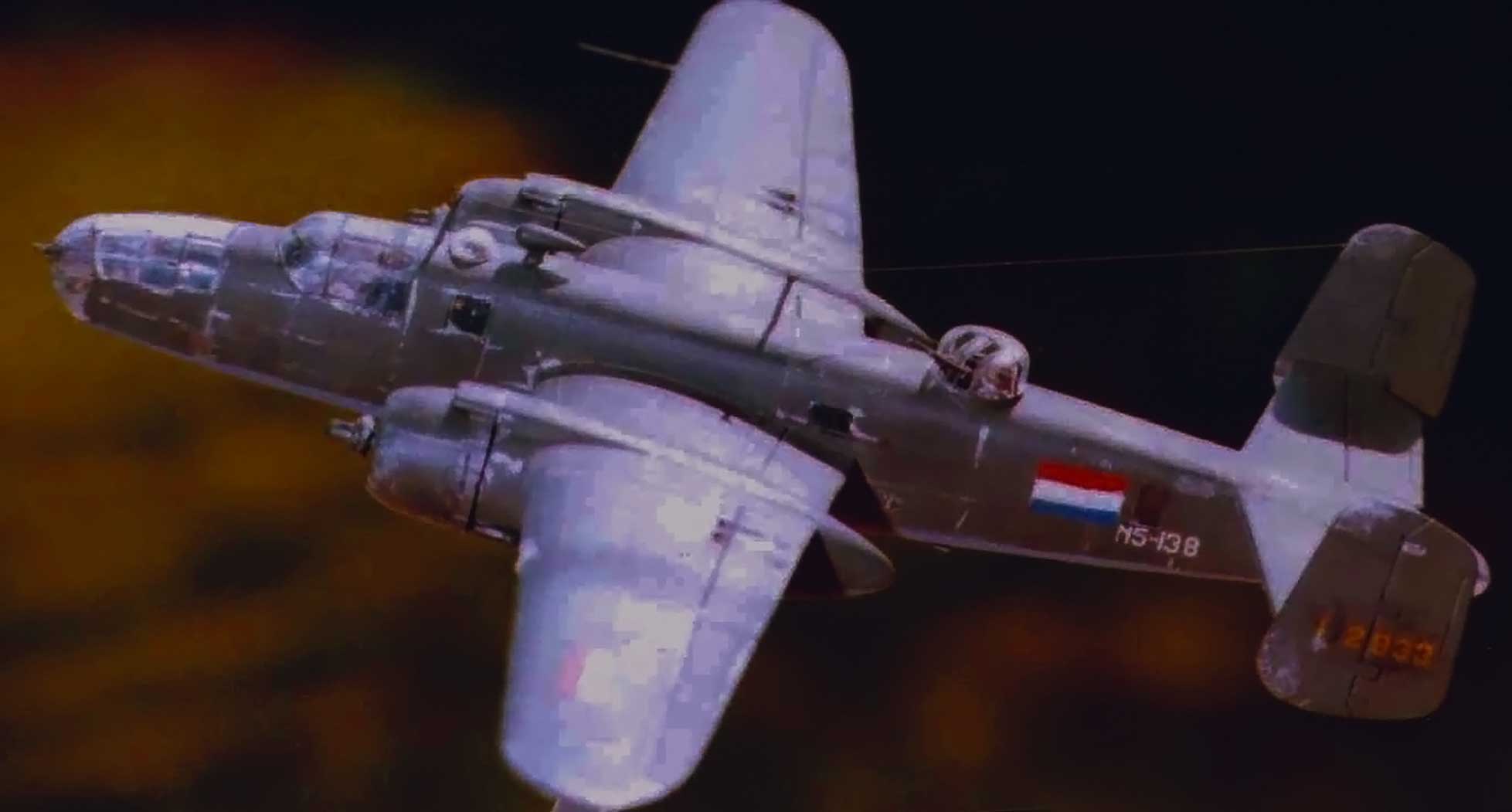 A B-25C Mitchell of the NEIAF, also built about 1984. A first attempt of weathering of the model.
The reason I've used the pylon was simple, some important parts of the landing gear were broken while building the model.
This model is scrapped now.
Decals used came from my scrap box, flags hand painted. The kit used is the old Revell-Italeri model in 1/72th scale. 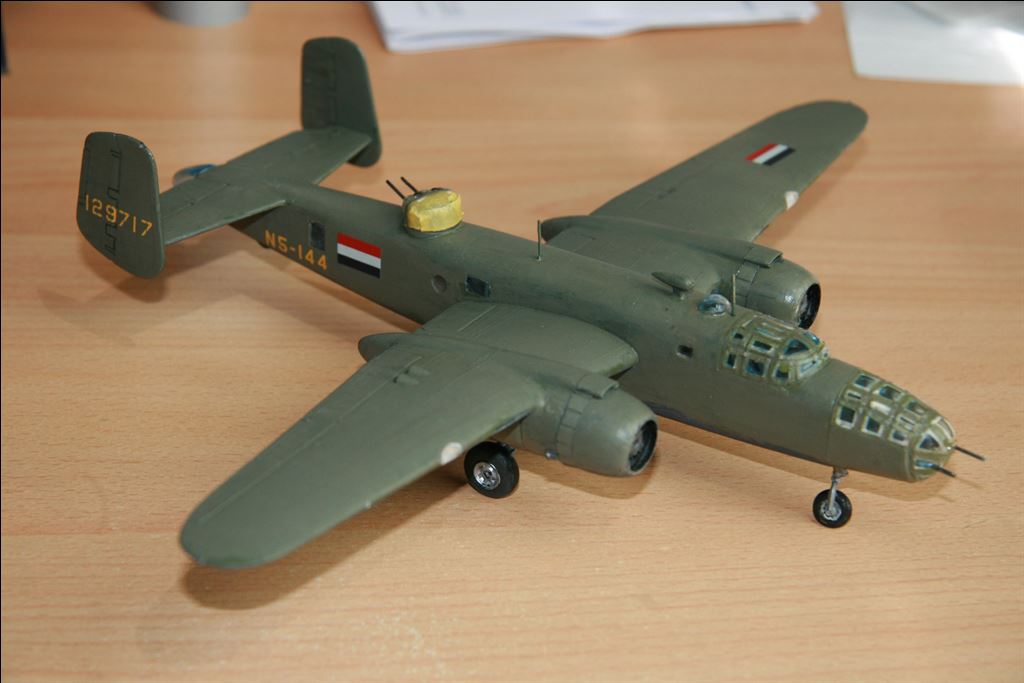 Again the same model of the B-25C Mitchell shown above.
I decided to refurbish my first Mitchell model, which I built early eighties. Here is a first result.
I found some props and undercarriage parts in my scrap box and adapted these to the Mitchell.
The decals applied are the TallyHo decals.
I don't think the yellow serial of this set is correct as the serials were usually white, but I used the anyhow. 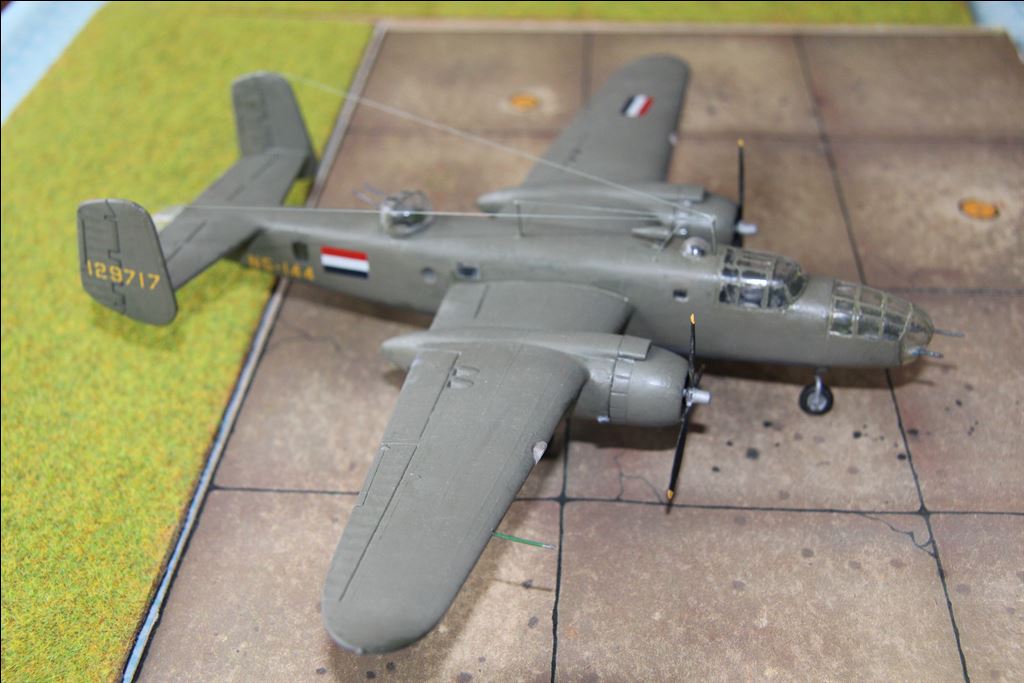 A NEIAF B-25C Mitchell I built in 2013;
The is the Italeri kit, decals used are from TallyHO 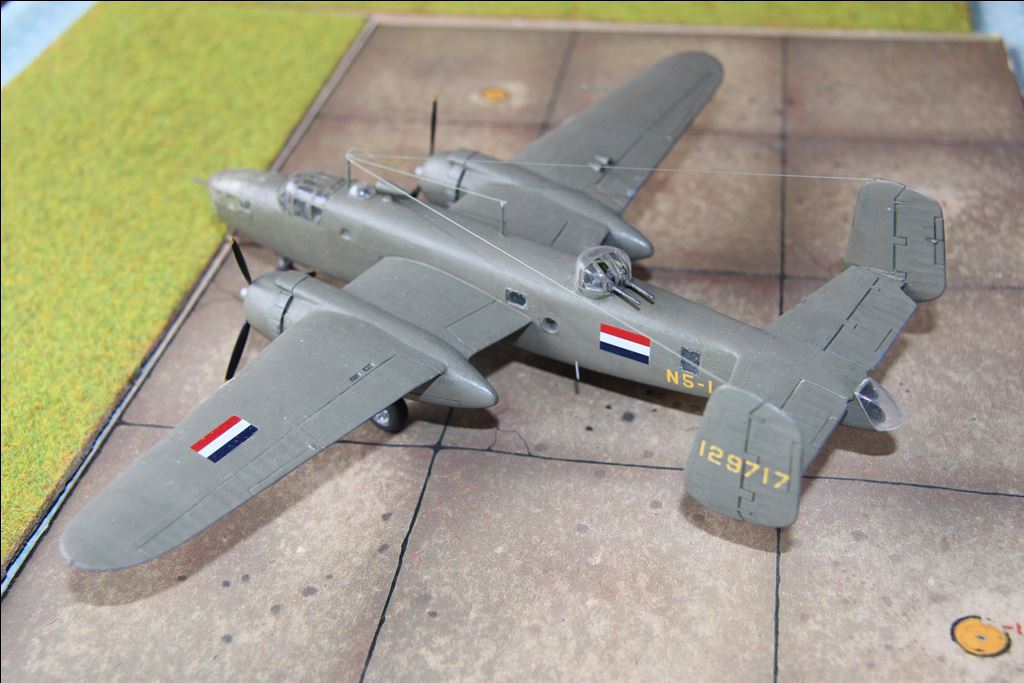 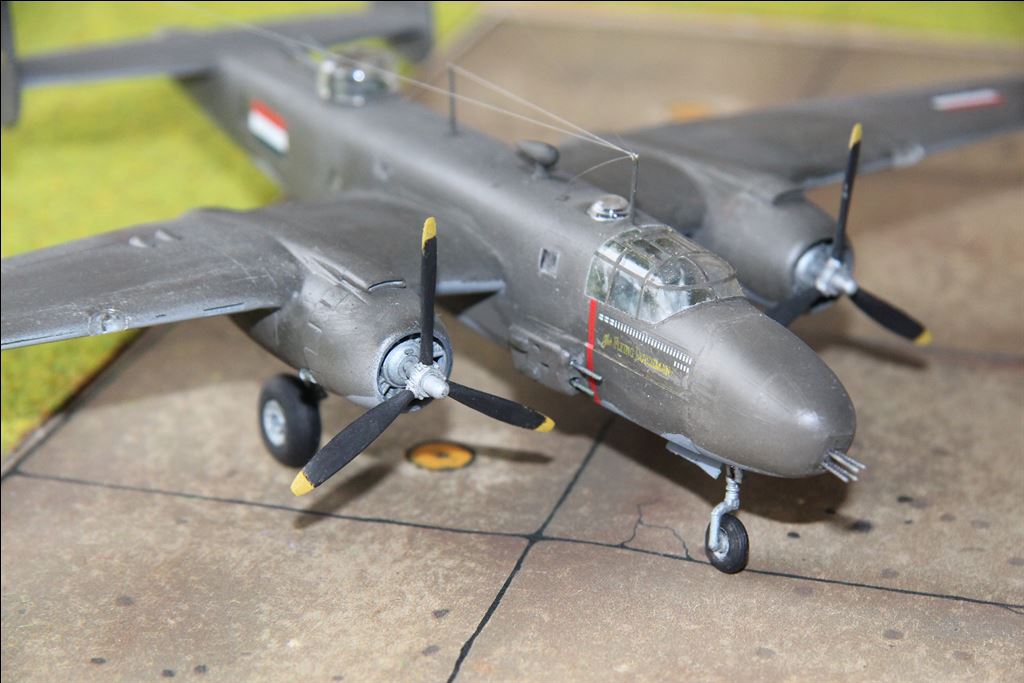 A model of a NEIAF B-25C Mitchell Strafer I built in 2014;
Kit used is the Italeri kit; decals come from the Dutch Decal set 72079.
Both gunpacks are scratch-built; the gun barrels are from the QuickBoost 72-025 "Gun Barrels" set. 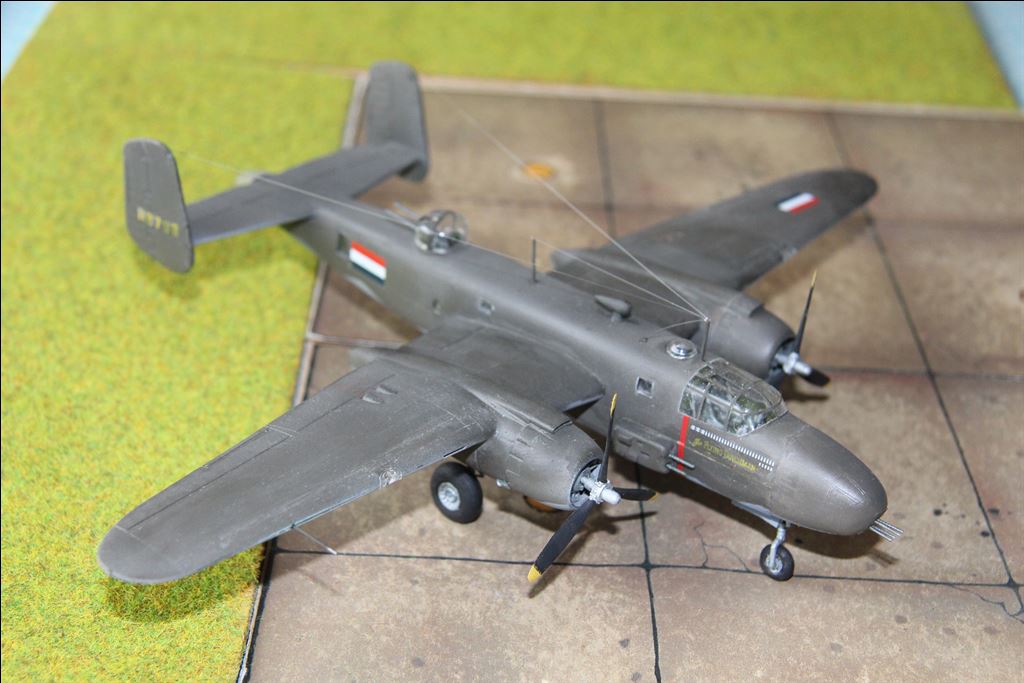 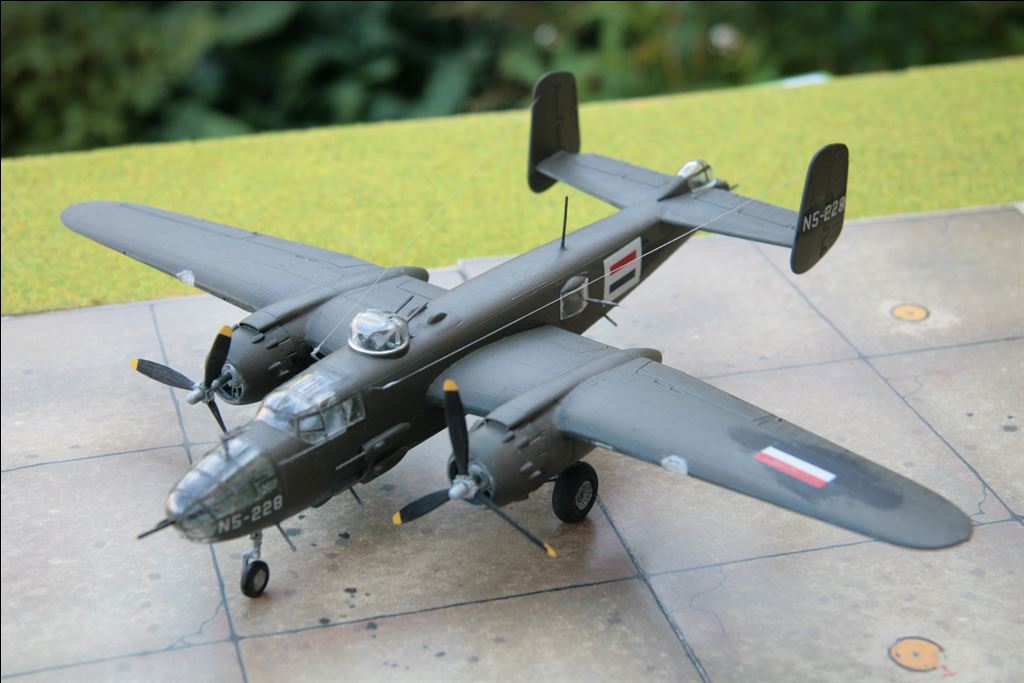 A B-25J Mitchell of the NEIAF, built in 2012;
This 1/72nd scale model is the Italeri kit.
Alas I discovered an error when the model was finished, as one fixed nose gun was missing in this kit. 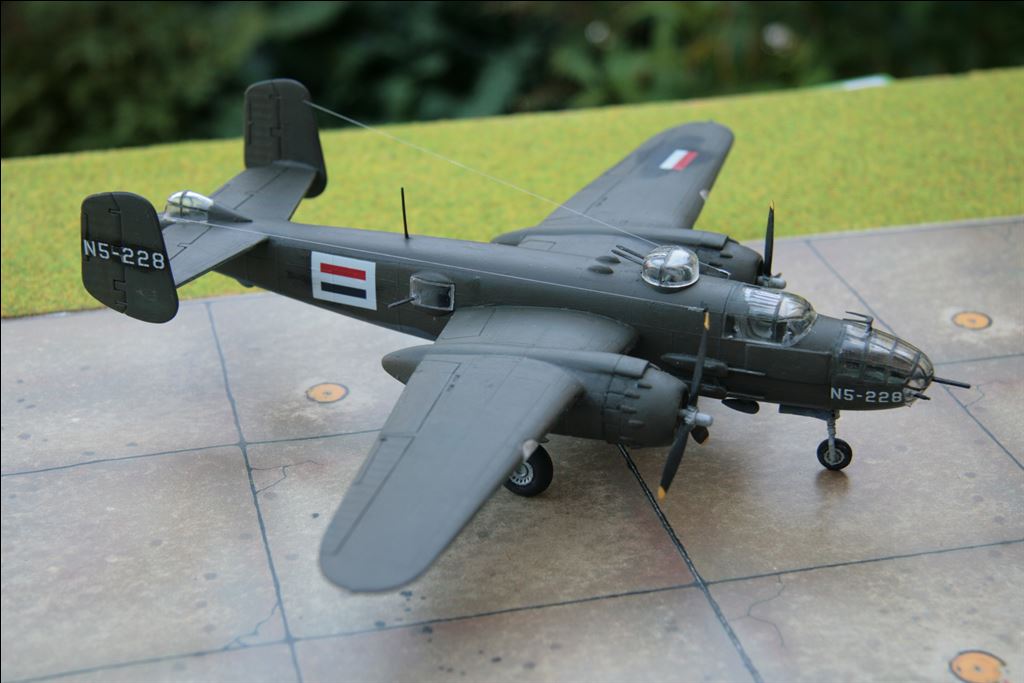 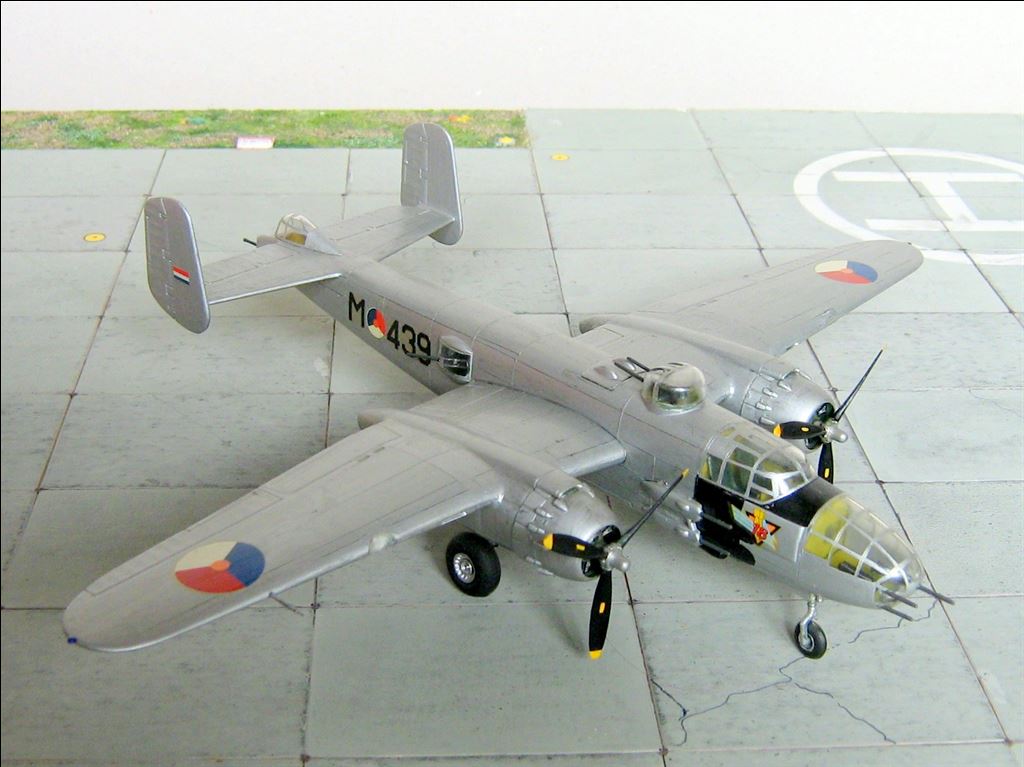 A model of a North American B-25J Mitchell, built by Adri Kleijn.