The Sikorsky R-5, the designation of the S-51 till 1948, was developed as the successor of the Sikorsky R-4. This helicopter was the helicopter to be produced in rather large numbers.
The S.51 was used under several designations and was also built under license by Westland as Westland-Sikorsky WS-51 Dragonfly. Over 300 examples were built.

The purpose of the R-5 was to improve the work load, service ceiling, range and speed of the R-4. The aircraft had an enlarged rotor diameter, larger fuselage and a more powerful Pratt & Whitney Wasp Junior rated 450 hp.

Soon a second order for 100 R-5As followed, thought just 34 examples of this type were delivered.
Sikorsky soon developed a modified version, the e S-51, with an enlarged rotor, enlarged work load and had a higher weight. The first S-51 flew on 16-02-1946.
The S-51 was, because three passengers could be carried, meant for both the civil as the military market. It was the first helicopter built for commercial, civil purposes.
Eleven examples went to the USAF as R-5F and ninety examples tot the US Navy as HO3S-1.
Westland started in 1946 with the production for the Royal Navy and Royal Air Force. The Westland built aircraft were equipped with an Alvis Leonides engine rated 500 hp. This improved the performance and raised the maximum speed to 166 km/h and the service ceiling to 4300 m. Westland built 133 examples.

Twenty-one Sikorsky R-5As were later modified with a third seat, a hoist, external fuel tank and a nose-wheel. Three of this modified R-5As were evaluated by the US Navy as HO2S-1. Another five examples were modified and equipped with double steering under the designation YR-5E.
In 1948 thirty-nine examples of the H-5Gs, a special rescue version, while later another sixteen aircraft were modified with floats under the designations H-5H.
In 1949 several H-5Hs were modified and equipped with extensions at both sides, in which two stretchers could be carried, see this example 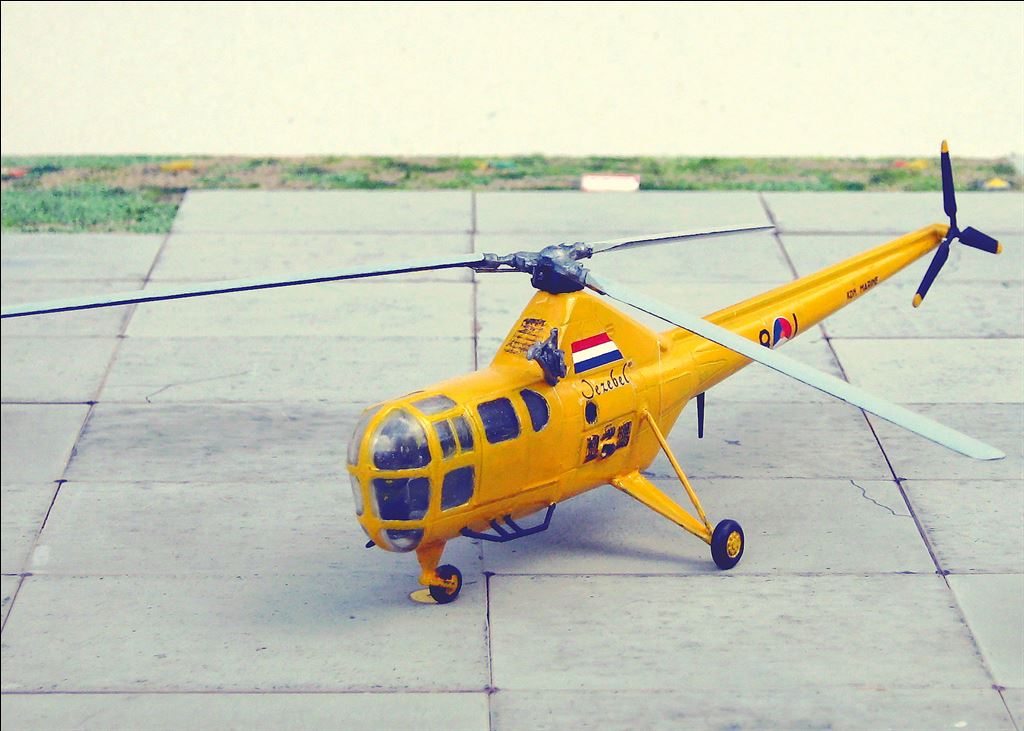 A model of a Sikorsky S-51, kit used is Airways, built by Adri Kleijn.