In 1977 the first Westland UH-14A Lynx entered Dutch service.
The Lynx replaced the Agusta-Bell 204 (I) UH-1& and was the lighter "Land 'version, the UH-14A, of which six were purchased. It was equipped with radar and could carry torpedoes.
Main task of this type was training, transportation and OSRD duties. 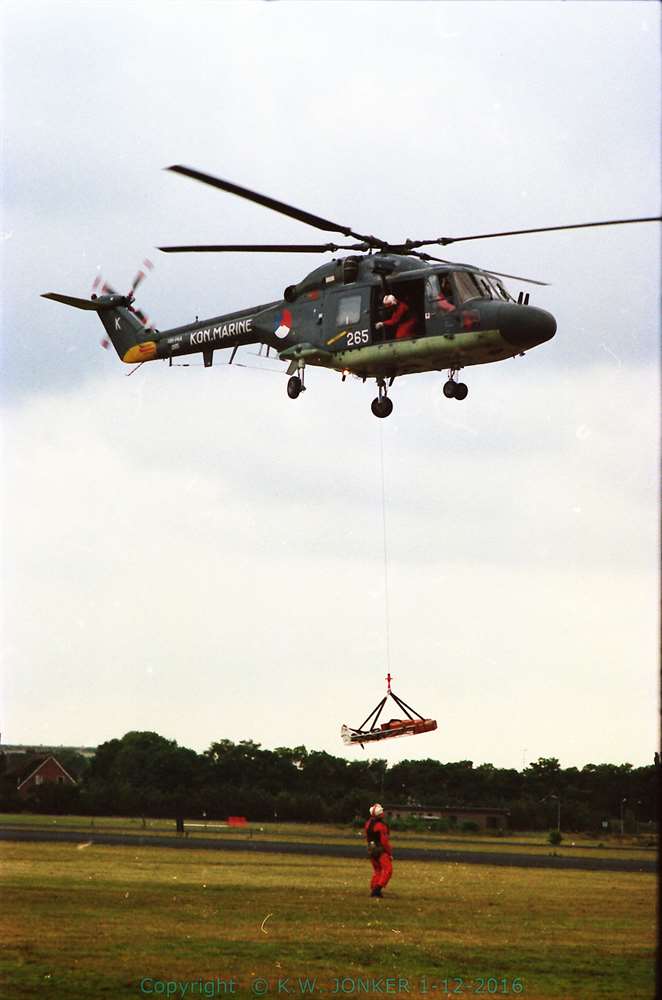 The first aircraft were originally assigned to ;the British no 700 squadron in September 1976 based at RNAS Yeovilton.
This squadron had an assessment task.
39 Dutch crew members were trained and th e two Dutch machines were the 260 and 261.
In May 1977 the Dutch contribution was terminated and the two aircraft were transferred to De Kooy.
No 700 squadron was disbanded in December of that year.
The UH-14A was assigned to VSQ 7 at Naval Air Station De Kooy in Den Helder.

In 1979, the first ASW entered service, Lynx Mk.27,under the designation SH-14B.
This, heavier version was equipped with an active Alcatal DUAV-4A sonar and was (at that tim e the only helicopter type ) suited for single pilot operations.
The (SH-14B) Lynx is in fact equipped with AFCS (Automatic Flight Control System =).
This stabilization system maintains the set height and automatic support of the pilot and is especially helpful in SONAR operations.
The AFCS is supported by the Doppler radar for the horizontal positioning. A disadvantage of Doppler is that it does not work under smooth sea conditions. 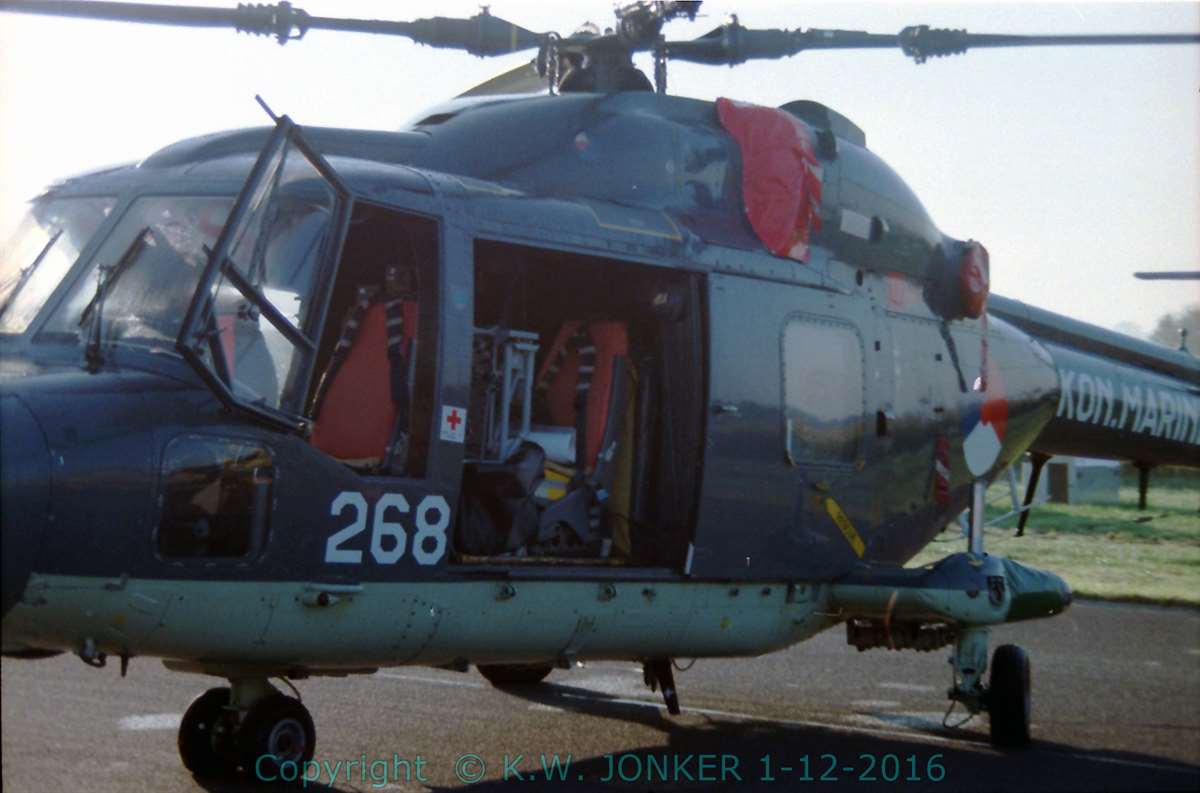 p>This is why the later Phalanx version of the Dutch Lynx was equipped with GPS.

The SH-14B, of which ten were ordered and assigned to VSQ 860, was intended as a flight helicopter for the new S-frigates and succeeded the Westland Wasp UH-12 helicopters.
The sonar was mounted under the fuselage.
A significant difference with the UH-14A Lynx was also the more powerful engine and transmission. The undercarriage was also stronger

Later eight additional Lynx Mk.81, Dutch designation SH-14C, were purchased. These were equipped with a Texas Instruments AN/ASQ-81 (V) 2 MAD system and also had a different engine than the two previous versions. The MAD system was attached to the sponson at the right side.
This Magnetic Anomaly Detection System can detect submarines by disturbances in the earth's magnetic field. The Lockheed Orion was also equipped with this system.
To actually detect a submarine it is necessary to fly more or less directly over the submarine. The Dutch Navy had in mind to do this with passive sonobuoys or have the SH-14B and SH-14C operate in pairs.
Initially a fourth type of the Lynx would be purchased, but due to the progression of the attack techniques of the submarines and the missiles being fired from a larger distance, this fourth type never entered Dutch service. The Lynx also had a too limited flying range and also, because the system in practice turned out to be disappointing in practice, the MAD was removed mid-eighties.
Five SH-14C's were provided with equipment or the installation of a sonar system as was available in the SH-14B.

All three types could be fitted with a hoist, the UH-14A was this at the back of the doorway, the other two types the hoist was situated at the front.
For safety, the Lynx was equipped with two floatation gears mounted on the sponsons.

In May 1979 the so-called BET (board lynx Evaluation and Test Group) was established for testing and evaluation of the Westland Lynx. This team was aimed at all limits of the Lynx helicopter on board when used as fixed. In May 1980 the first Lynx SH-14B made a deck landing on a Dutch naval frigate.

The Lynx is designed as a fast and highly manoeuvrable helicopter. This agility was needed to be able to avoid anti aircraft arms and to manoeuvre between the often swinging ships. The rotor system has a rigid construction because of this necessity.
A major drawback is that vibrations are passed to the other parts of the system, thus causing many problems with the electronic equipment. Initially, these electronics were replaced, but after some time, good equipment became available to properly balance the blades and so the vibration problem was solved.

Another problem was a logistical and technical one and was a direct result of using three different version and in particular the different types of engines used.
It also happened that large differences in flying hours per type emerged. The UH-14A, with a transportation and training function made a lot of flying hours, whereas the SH-14B an -C versions made much less hours. 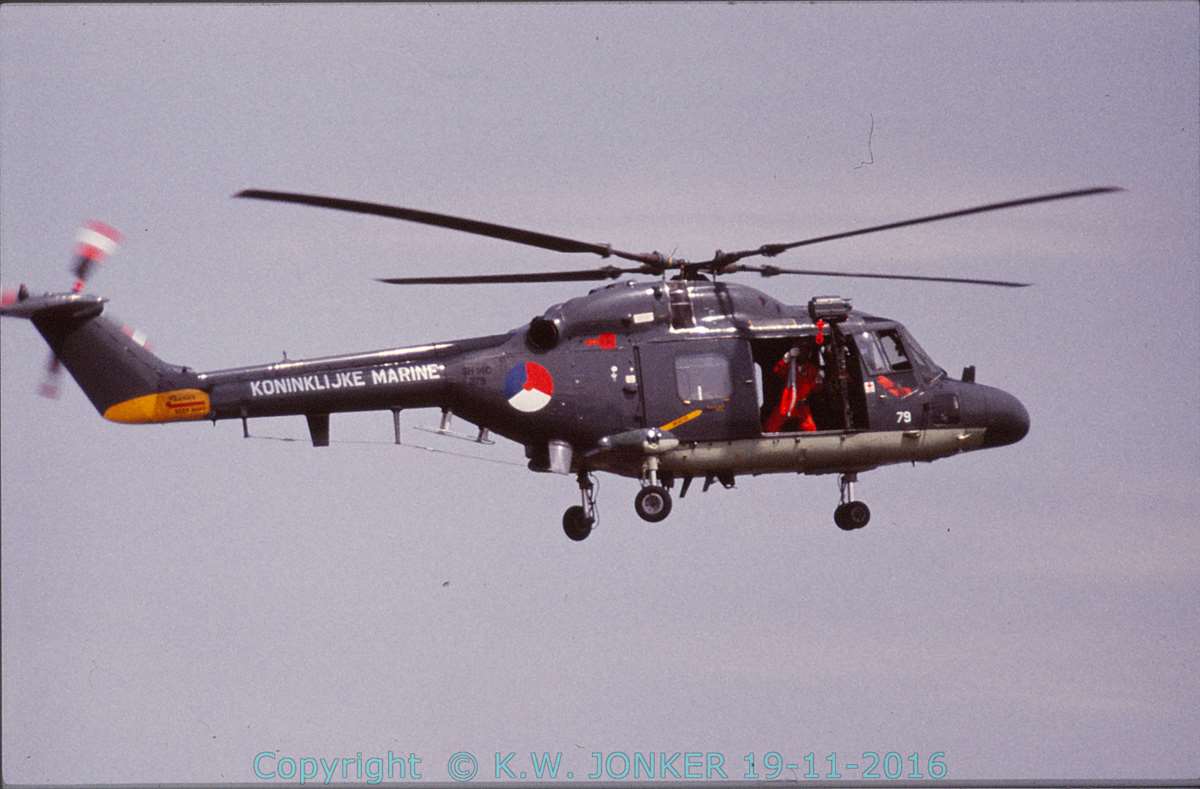 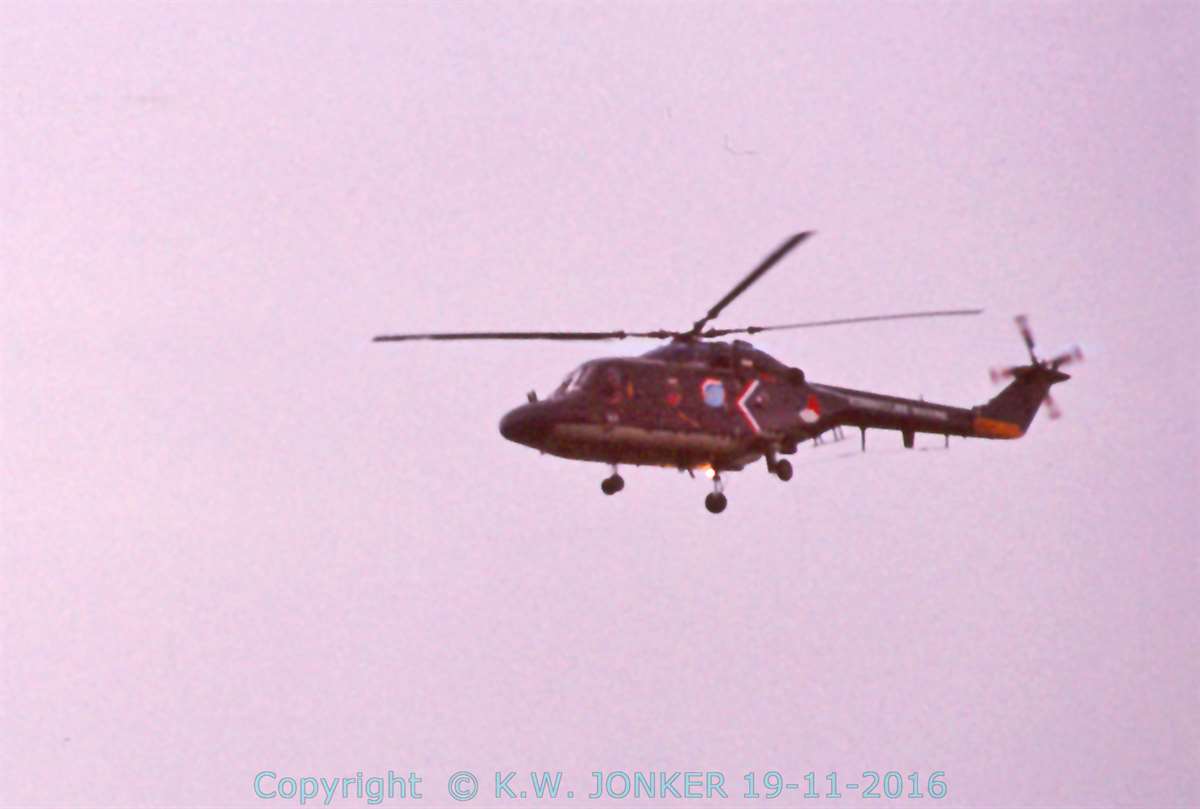 In November 2003, again two aircraft, this time Lynx 277 and 276, were sent to Liberia. Later Lynx 270 was sent as a replacement. In April 2004 the aircraft returned.
They were given a UN-assigned serial number, 277 was UN 151 and Lynx 276 was UN 152.
The tail had the UN flag applied and the UN serial number with the text UNITED NATIONS on a white surface on the tail boom and just before the roundel on the fuselage a large square white surface with marking UN was applied.

In more than thirty years that the Westland Lynx has been in Dutch service, several modifications has been applied.
The SH-14B / C had originally a small VHF/UHF antenna under the tail. Later this was replaced with the larger antenna as the UH-14A already had.

In the summer of 1990 the (first) Gulf war started. The Netherlands sent as support some warships with a number of Lynx helicopters.
The frigates Hr. MS Pieter Floris, with two Lynx helicopters, the 268 and 283 on board and Mr. MS Witte de With, an air defence frigate, were sent. The marines aboard used the hoist to get aboard ships, which happened to be a time consuming and difficult job. After some time, the "fast-rope" system already used by the English navy , was tested and later used.
One problem was the heat of about 38 °C, causing the engines to deliver more than 20% less power.
Based on the experience two other aircraft, the 274 and 280 were adapted and made more suitable for Anti-Surface Warfare. These aircraft were aboard Mr. MS Philips Almonde from mid November 1991.
For example, a GPS (Trimpock .13210-0). arranged, recognizable by the white cap mid-tail and a FLIR System Model 2000A below the left doorway and a Dalma Victor AN/APR-39 RWR (Radar Warning Receiver) (the antenna on the nose and the antenna in the white fuselage roundel) were added.
Furthermore, a MAG 7.62 mm machine gun was mounted in the right doorway.
For a landing of marines was the fast rope system was installed.
Later a Ferranti AWARE-3 was also added.
Other aircraft had also a Chaff flare dispenser and M130 mounted under the tail, e.g. SH-14B 268.

Due to the problems regarding the flight hours and maintenance problems it was decided to upgrade the Lynx to a standard type: the so-called STAMOL project. This project ran from 1991 to 1993
From 1994 the rotor blades replaced by the aforementioned BERP blades.
The first step was the standardization of the engines and Rolls-Royce Gem 42 turbines were installed.
Further more were sixteen aircraft equipped with the Alcatel Dipping Sonar, the remaining six aircraft had just the facilities built in.
Also, an UHF radio system, RWR, FLIR Systems Inc. 2000HP FLIR, a Trimble 2200 GPS and a new type radar altimeter were installed.
No changes were made such as with the British Lynx HMA.8, e.g the Dutch Lynx kept its original tail rotor.

Mid nineties the Dutch Lynx was equipped with the new plastic main rotor blades, the so-called "CMRBs" = Composite Main Rotor Blades.
Westland stopped manufacturing the original, metal blades and provided only the CMRB. These blades, also referred to as "BERP" (British Experimental Rotor Programme BERP =), can be identified by the widened, slightly curved end.
In case of applying these blades Westland prescribed to modify the horizontal tailplane. Approximately 45 cm was removed and the trailing edge was provided with a raised edge, "Gurney flap" of about 2 cm. 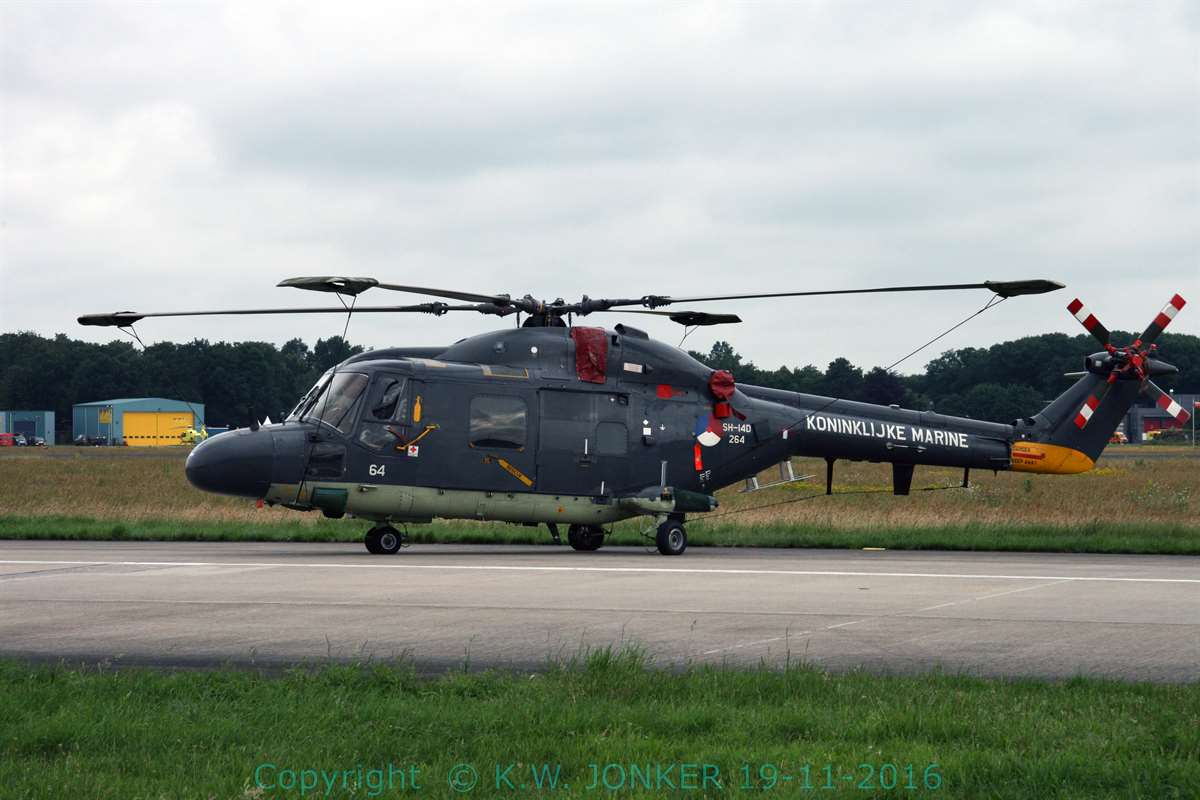 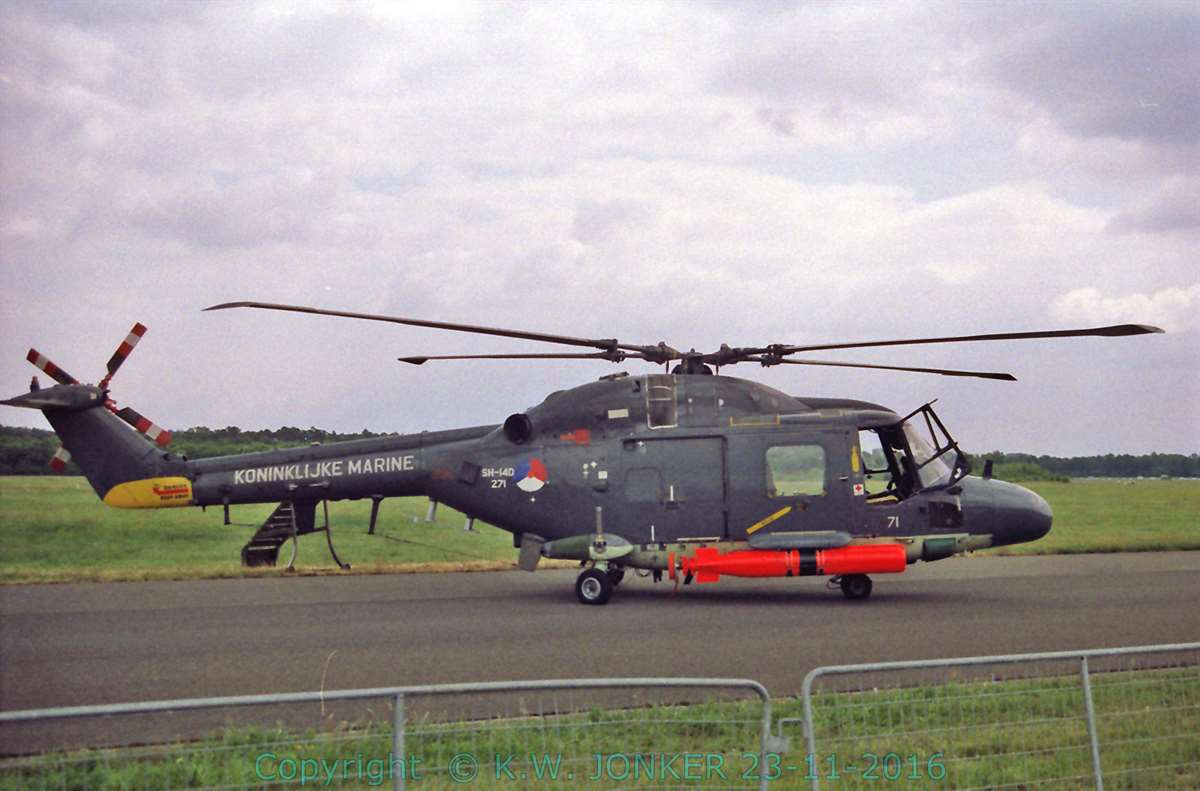 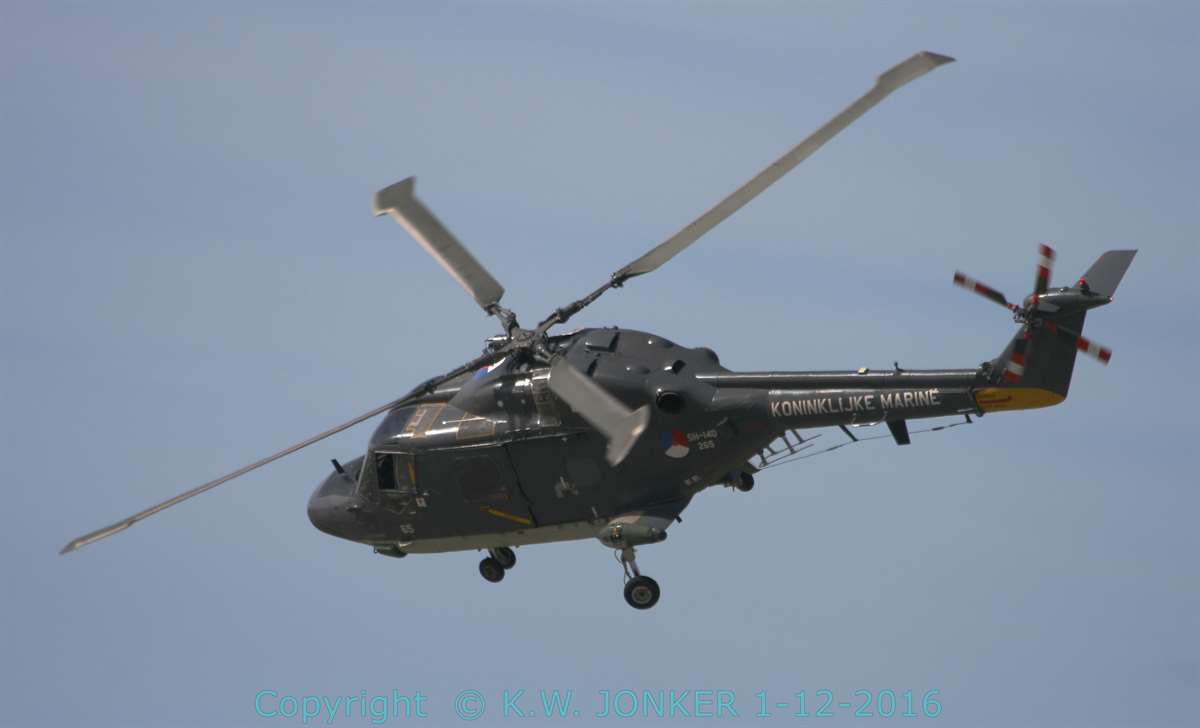 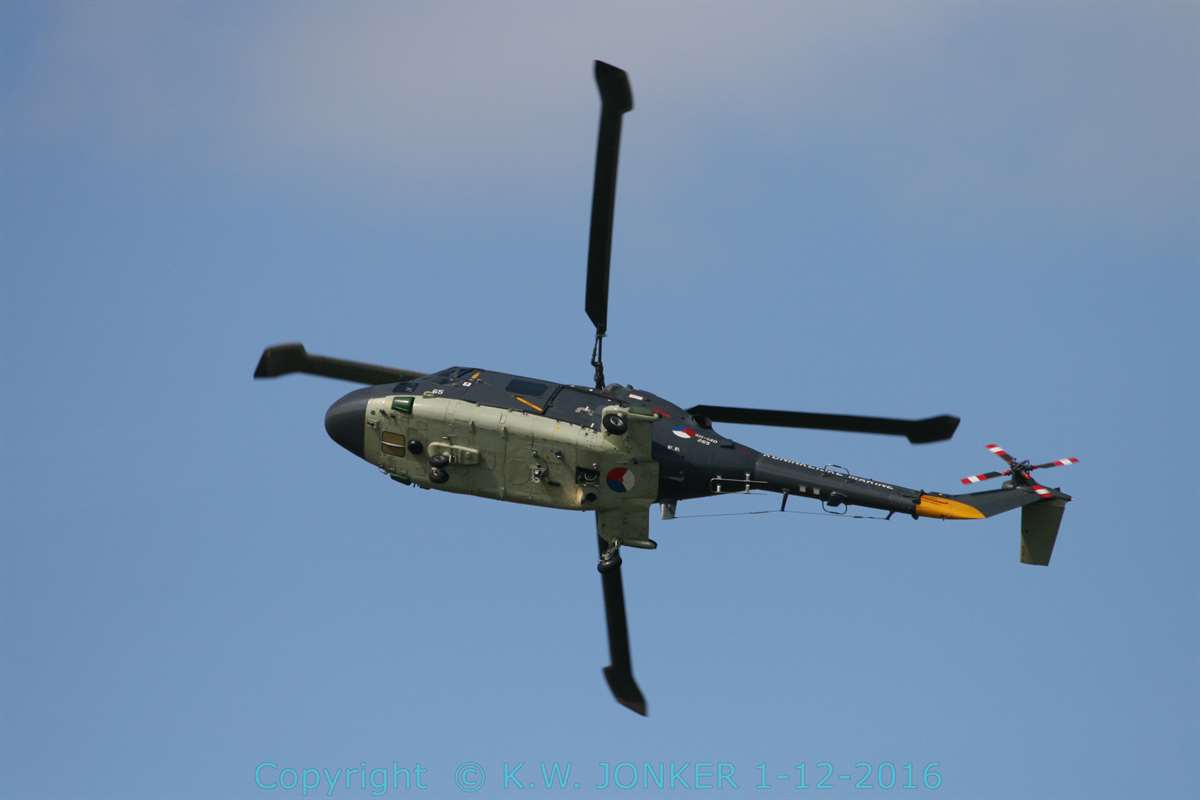 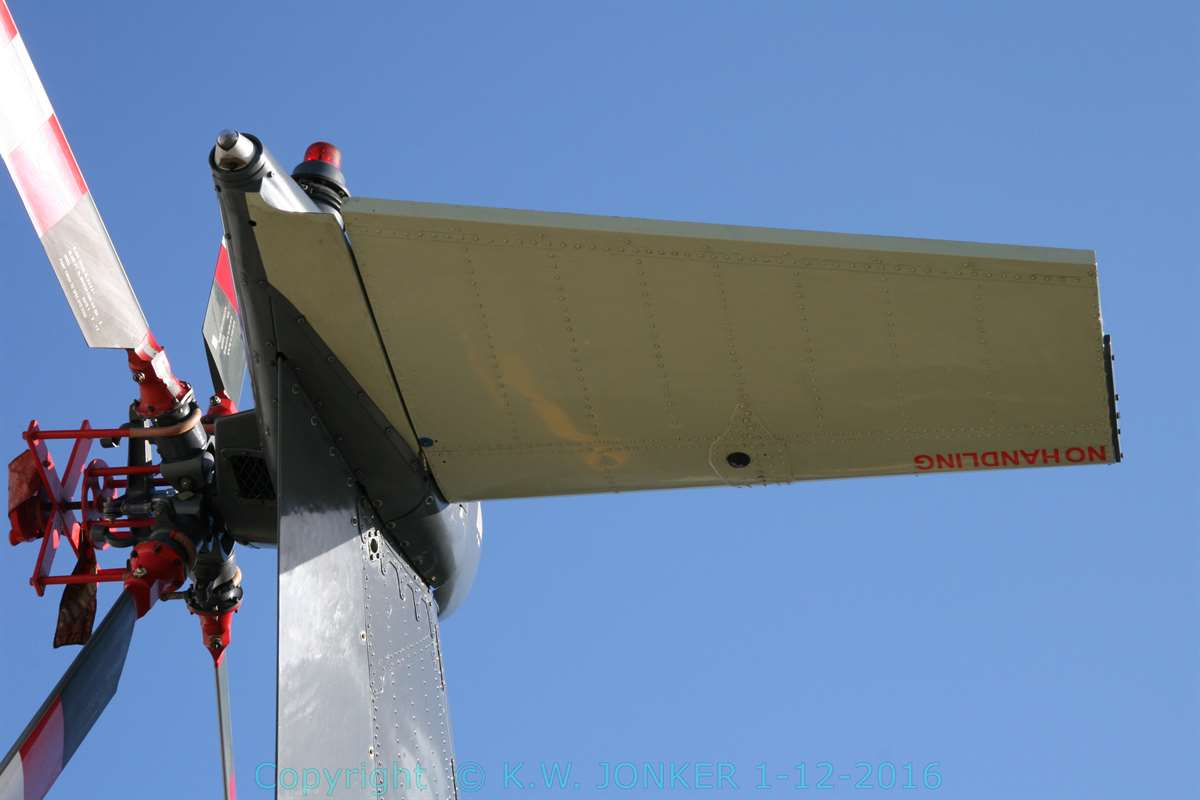 During the nineties one of Lynxes had reached its technical design lifetime of 7000 flight hours.
The aircraft, Lynx 270 was withdrawn from service and sent to Westland for inspection.
The construction was still in good condition and it underwent major repairs so it could still take another 1000 hours.
Later, six other Lynxes and possibly more, underwent such a MLM, especially since the delivery of the successor of the Lynx, the NH-90 was significantly delayed.

On September 11, 2012 the Dutch Westland Lynx was definitely withdrawn from use, you may check these (Dutch) sites Afscheid Lynx op Facebook and Lynx in Nederlandse dienst